Remember when you could dine, dance or marry on an Arkansas riverboat? 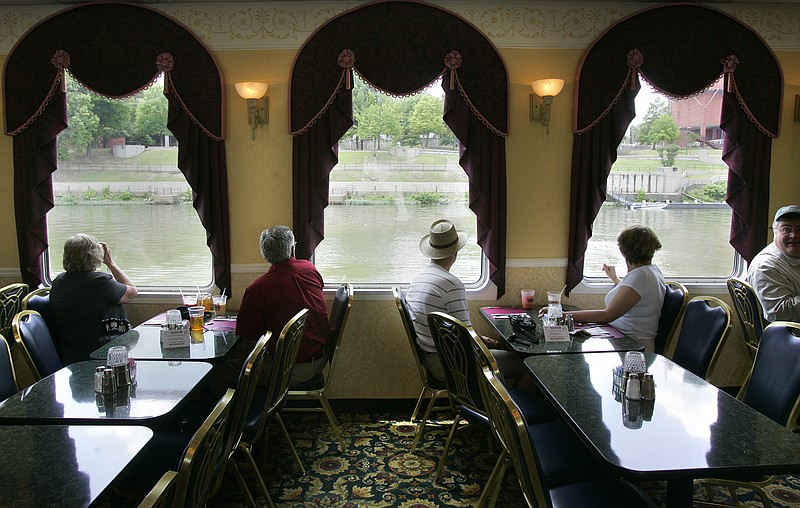 Guests onboard the Arkansas Queen riverboat look out the dining room windows June 3, 2006, while waiting for their luncheon cruise meal. For Remember when 1/9/23. (Democrat-Gazette file photo)

Rare these days, paddlewheel riverboats were standard transportation in 19th-century Arkansas; and several have served Central Arkansas in recent memory.

Even a middleschooler might recall one of the boats that came and went at North Little Rock where, in December 2004, the city bought the Patriot tugboat and the Shipwreck Mary barge for $135,000 to provide a dock for such cruise operators.

Most recent was the Mark Twain, which lasted from 2013-15. North Little Rock ended its contract with that company (in a $60,000 settlement) after the Patriot deteriorated beyond repair.

Before Mark Twain, the Arkansas Queen held musical excursions, weddings, charity banquets and all-comers cruising. A triple-deck, replicated sternwheeler 130 feet long, the Queen could carry 338 passengers, if everyone stood up. Built in 1994 as the Peconic River Queen, from 2003 until it came to Arkansas in 2005 it was the Tunica Queen of Tunica County, Miss.

Among the Queen's amenities were a dance floor, two climate controlled decks, food service — and a boat chaplain, a Baptist minister who conducted the weddings.

The Queen leased 350 linear feet of riverbank in Riverfront Park next to the Arkansas Inland Maritime Museum and tied to the then-still buoyant Patriot, which held offices, a gift shop and galley. The riverboat also operated a bar, the Salty Parrot, on the former Shipwreck Mary.

The Shipwreck moniker resurfaced in public discourse in 2009 when the Parrot sank. The riverboat company wanted the barge replaced; the city didn't replace it.

Under the Queen's 10-year lease, the company was to pay rent equal to 1.5% of its annual gross revenue when that revenue was between $1.5 million and $2 million, or a larger rent for larger revenue. But the site failed to generate such revenue. The company never paid any rent.

And it could quit the lease without penalty; so, in January 2013, it did. The Queen left Central Arkansas to New Orleans headed for sale and from thence to ports unknown.

Longer memories will recall The Spirit, which toured from the north shore from 1985-2000. Originally the Spirit of Evansville, this 150-passenger riverboat belonged to the late Pat and Henry O'Bryan Burch. Sold and rechristened the Bavarian Belle, it operates at Frankenmuth, Mich. (see bavarianbelle.com).

Gallery: Riverboats on the Arkansas