TELEVISION: ‘Lying Life of Adults’ from a young perspective 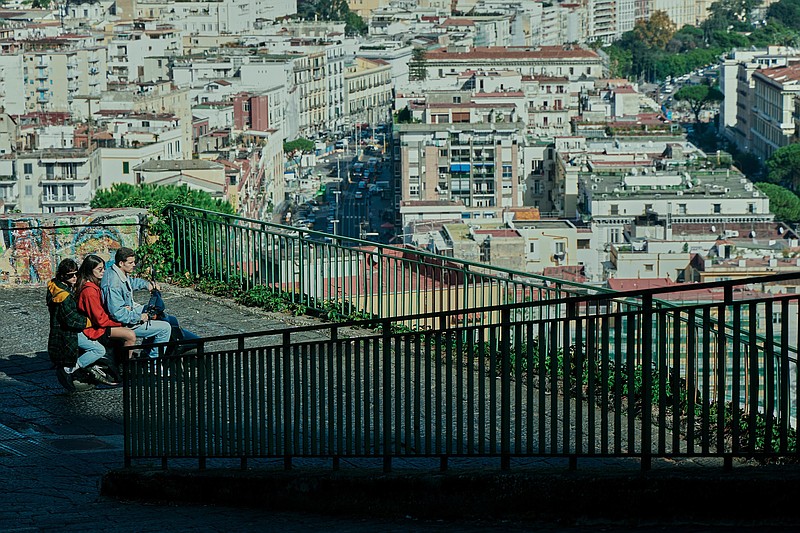 "The Lying Life of Adults," the latest novel by the famously pseudonymous Italian writer Elena Ferrante, has been adapted — one might say inevitably — for the screen as a six-part Netflix series. It follows HBO's lauded and ongoing "My Brilliant Friend," based on Ferrante's "Neapolitan" tetralogy, and three books turned into theatrical features, including last year's "The Lost Daughter," directed by Maggie Gyllenhaal. (One can easily imagine that some studio holds an option on whatever Ferrante is thinking right this second.) Her work has the quality of being at once popular and literary, with the sort of vivid characters actors crawl over one another to play.

If the Netflix version lacks some of the emotional complexity of the book — and even at six episodes, it is a streamlined telling — it is certainly no insult to the text, whose arc it faithfully replicates and significant scenes it pictures, some brilliantly, if not necessarily in the way you might have pictured them. Anyone new to the story will find a well-told tale of more or less ordinary people in not especially extraordinary circumstances, with some exotic scenery and striking central performances by Giordana Marengo as main character and narrator Giovanna Trada, and Valeria Golina as her aunt Vittoria.

Most of the action is set among three distinct Naples neighborhoods: the bourgeois Vomero, high up, where Giovanna lives with her parents, Andrea (Alessandro Preziosi), a professor, and Nella (Pina Turco), a proofreader and de facto editor of romance novels; the wealthy seaside Posillipo, where reside family friends Mariano (Biagio Forestieri) and Costanza (Raffaella Rea) and their daughters Angela (Rossella Gamba) and Ida (Azzurra Mennella), Giovanna's closest friends; and the working-class Pascone, in the Industrial Zone, where Andrea was born and Vittoria, his estranged and demonically mythologized sister, still lives. Each quarter is a prison in its own way, threatening to determine character or limit possibilities, and Naples itself is portrayed as a place to get away from.

As the title might indicate, this is a story seen from the point of view of a young person. Like Holden Caulfield, another teenage hero much disturbed by hypocrisy, Giovanna has been failing her classes; when her mother suggests it's a product of adolescence, her father offhandedly remarks that she is getting the ugly face, and therefore the spirit, of his sister (whose face he has blacked out from family photographs). Giovanna overhears, which leads to a crisis, which brings her to Vittoria's door.

Along with Vittoria, she meets her "children" — the young adult children, in fact, of her neighbor Margherita (Susy Del Giudice), whose late husband was also the love of Vittoria's life. But life there is pictured, in perhaps too clear a contrast to her more proper existence up the hill, as rich and warm, messy and honest, more spiritual than intellectual and attractively dangerous. And there is gelato.

All these characters are mixed up in intersecting family dramas that to describe further might constitute spoilers. Much of the narrative revolves around the possession and the provenance of a white gold bracelet, which moves around with shifting allegiances and betrayals. Women are at the heart of the story; most of the men are, by contrast, shallow, immature, generally less well or sympathetically portrayed; even their pain seems less meaningful.

We can work out that the book is set in the 1990s because we know that Giovanna was born in 1979 and is 12 when it begins, but Ferrante provides no specific cultural signifiers. Director Edoardo De Angelis and his team have smartly, if with an occasional excess of style, filled in the blanks where the author has left out description. (She writes that Giovanna will sometimes play music loud and dance, for example, but here she's a wannabe break dancer.)

Picturesque details, musical numbers and colorful backdrops have been added, along with an invented scene or two — a trip to a rock club, a Communist Party carnival (with a little background violence thrown in, to remind us that we're in crazy Naples) — to actualize a book that is largely talk and thought. La Casa del Portuale, a landmark of Brutalist architecture, is enlisted for a church. There is the sea and Mount Vesuvius glimpsed again and again in the distance. The series also grants Giovanna a Vespa, which I suppose symbolizes growing freedom more effectively than does riding public transit, and looks good onscreen.

The novel is an acute portrayal of adolescent self-doubt, self-absorption and self-dramatization, and of the way the world and people in it change shape as one gathers new experiences. Though not uneventful, it's not so much about what's happening as Giovanna's evolving thoughts about what's happening, thoughts that mix insight and misunderstanding. It's especially a challenge to Marengo, given that Giovanna is a taciturn, poker-faced character. Which is not to say that her performance isn't emotionally intelligible or without interest on its own merits. Indeed, it's worth turning up for on its own.