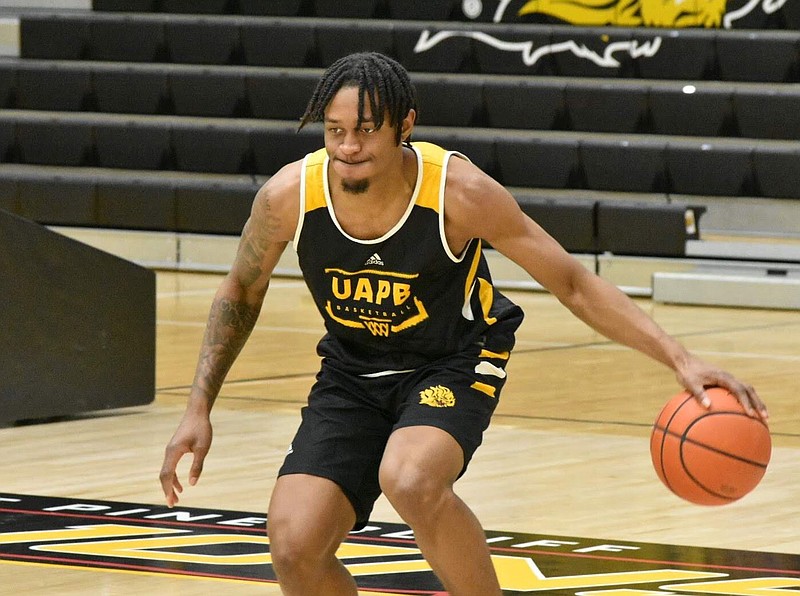 Kylen Milton of the University of Arkansas at Pine Bluff Golden Lions is shown in this undated file photo. (Pine Bluff Commercial/I.C. Murrell)

The University of Arkansas at Pine Bluff led nearly wire-to-wire and got 20 points from Kylen Milton on Saturday in a 67-54 men's basketball victory over Florida A&M University in Tallahassee.

UAPB (7-11, 3-2 Southwestern Athletic Conference) has won its third game in a row and established its longest winning streak since earning four straight in February 2019. The Golden Lions can match that mark Monday at Bethune-Cookman University in Daytona Beach (tipoff 6:30 p.m. Central).

Milton grabbed five rebounds and made 8 of 12 free throws in 31 minutes of action. Shaun Doss Jr. nearly earned a double-double with 18 points and eight rebounds while shooting 8 of 10 at the line and making three steals. Chris Greene added 8 points.

UAPB led for nearly 38 minutes of the game and only trailed 3-2. The final margin was the Lions' largest lead of the game.

Jordan Chatman had 15 points and five rebounds, and Jordan Tillmon registered 11 points and four assists for the Rattlers.

In Monticello, Isaac Jackson scored 19 points and collected seven rebounds in 40 minutes, but he could not lift the UA Monticello Boll Weevils (5-9, 1-7 Great American) out of a skid that has now reached five games.

Also in Tallahassee, UAPB's 7-of-15 three-point shooting helped the Lady Lions win for the second time in three games.

"We were very resilient and did a good job of controlling the pace of the game," UAPB Coach Dawn Thornton said. "We have to do a better job at protecting the ball, but our defensive play stood out and made up for those slight miscues. Kourtney [Rittenberry] has stepped [up] as an asset to our defense since joining the starting lineup, and Maya continues to show her presence in this conference night in and night out."

Rittenberry, a sophomore guard from Loganville, Ga., started for the third-straight game and has made eight steals in the past four games. She has 13 on the season.

UAPB will visit Bethune-Cookman for a 4:30 p.m. Central tipoff Monday.

In Monticello, Bailey Harris collected 21 points and seven rebounds and the Cotton Blossoms (6-8, 3-5 Great American) won their second in a row.

UAM will tip off against Arkansas Tech at 5:30 p.m. Monday in Monticello.

In Monticello on Friday, the Lady Wildcats' turnaround has extended to a sixth-straight victory, setting up a first-place battle against Star City at home Tuesday.

Kha'leyce Cooper scored 14 points and Christian Lovett totaled 8 for Watson Chapel (9-9, 4-0 in Conference 4A-8), which held Monticello to 1 point and led 27-4 at halftime.