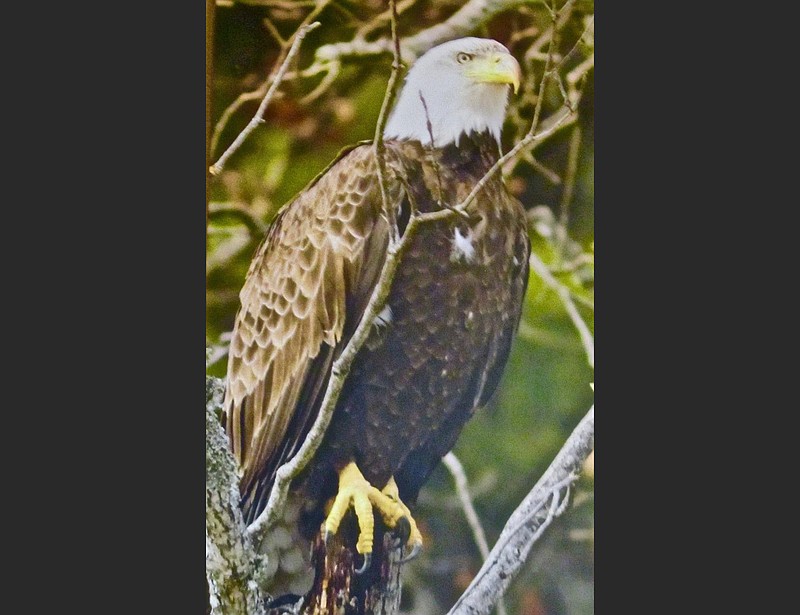 DEGRAY LAKE RESORT STATE PARK — On a sunny January afternoon, with the thermometer near 60 and only a slight breeze, we six passengers were enjoying the Eagle Watch Cruise on DeGray Lake. That was true even though we'd failed to see a single eagle while on the water for more than an hour.

Then came a crowning moment, like a home run in the ninth inning of a scoreless game. A passenger, wielding his binoculars, was the first to spot one of the majestic eagles circling above the shoreline trees. Other binoculars zeroed in, confirming the white head and tail markings of America's national bird. The sighting lasted for at least five emotion-soaring minutes.

We'd been cautioned at the outset by Linley Hittenrauch, our DeGray Lake Resort State Park guide and boat pilot, that seeing even one eagle was "more or less a matter of hit or miss."

Hittenrauch proved to be a reservoir of information about bald eagles. She reminded us that Benjamin Franklin had decried the selection of the eagle as an image of the United States, citing its "bad moral character."

The Founding Father, she noted, had maligned the species for sometimes stealing a catch from other birds rather than fishing for itself. He'd urged that the wild turkey be made our symbol. We chuckled at the notion that if Franklin had won his argument, Thanksgiving dinner might feature roast eagle rather than the traditional turkey.

By Hittenrauch's account, we were a couple of months late to have the best chance of spotting a bald eagle on DeGray Lake. The likeliest time, she said, was in the fall. The park's eagle tours begin each November on Saturdays and Sundays, continuing through February. They also take place at Lake Ouachita State Park and Hobbs State Park-Conservation Area.

Eagle cruisers are more likely to see vultures than eagles, as Hittenrauch mentioned. An eagle is big and black with a white head and tail, flying with its wings extended straight out. The smaller vulture will have its wings pointing up.

We learned that DeGray Lake has a resident bald-eagle population all year long. When perched, adults are about 3 feet tall, with females a bit taller than males. Nests are built in trees, as we saw along the shoreline. And the species' name does not denote a lack of hair. "Bald" stems from the word "piebald" — patches of white on a black background. 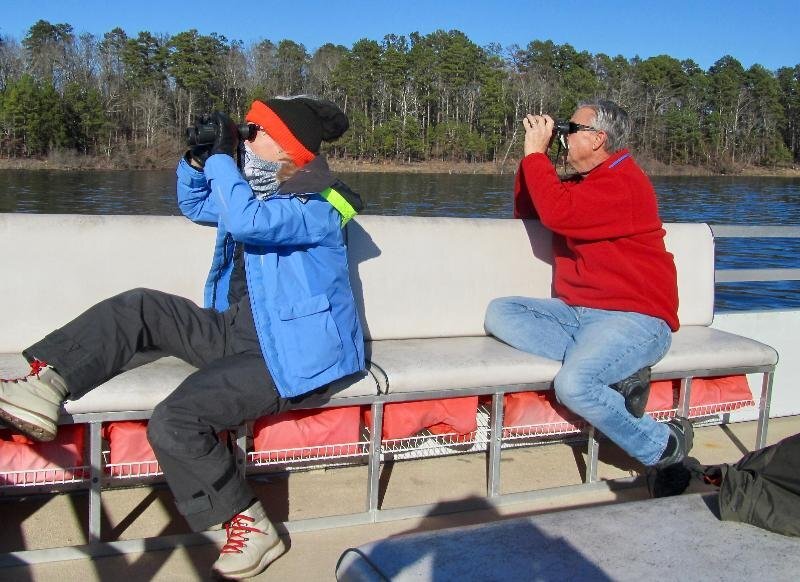 Two eagle watchers focus binoculars on the DeGray Lake trees and sky. (Special to the Democrat-Gazette/Marcia Schnedler)  At one point, we saw a handmade sign nailed to a tree. It said: "Johnson's Cove." Hittenrauch explained that it referred to a local legend about a place supposedly haunted by a moonshiner toting a shotgun.

In real life, she told us, DeGray Lake covers a former dairy farm and other properties submerged when the U.S. Army Corps of Engineers dammed the Caddo River to create the reservoir in 1972. The state park was opened two years later.

Buoyed by our sighting as the cruise ended, we were also heartened by Hittenrauch's information about the growth of the bald eagle's population since it faced possible extinction a half-century ago.

Due in part to the pesticide DDT, the eagle count in the contiguous 48 states had fallen to 487 nesting pairs by the late 1960s. Other factors in the near extinction included loss of suitable habitat along with legal and illegal hunting.

The bald eagle was declared an endangered species in the Lower 48 in 1967. The U.S. banning of DDT in 1972 became a major factor in the population's recovery. It is no longer on the endangered list. Hittenrauch gave the current population at an estimated 200,000 to 300,000.

We had seen only one of them. But that made our day.