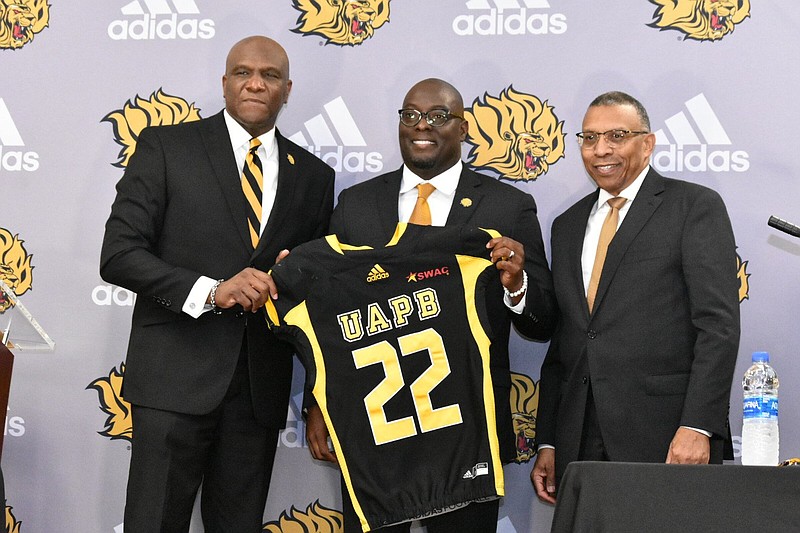 PINE BLUFF -- Alonzo Hampton wasn't in unfamiliar territory Tuesday afternoon on the University of Arkansas at Pine Bluff campus, but he's got a plan in place to take the Golden Lions' football team back to a familiar place.

Based off the celebratory atmosphere and enthusiasm inside the school's Stem Building, UAPB and its fan base appear to be all in on getting there.

"We're going to always work towards reclaiming our spot as [Southwestern Athletic Conference] and HBCU national champions," said Hampton, who was officially introduced as UAPB's new head football coach in front of a huge, energetic crowd. "It's going to be a process, and I want you to understand what a process requires. In a process, there's going to be some pain. In a process, sometimes you're going to have to persevere through some things because those things aren't always going to be in place. ... But I just ask that [fans and administration] trust me and trust my coaching staff.

"When we put our hands to the task, we're not going to get our hands off that task until we complete the job."

The job for Hampton was clear when the UAPB administration announced his hiring on Dec. 22: Restore pride back into a program that was sitting near the top of the SWAC less than two years ago.

The Golden Lions went 4-1 and reached the conference title game during the 2021 spring season but have won only four of their next 18 games. That fortuitous drop resulted in the firing of Doc Gamble as coach on Oct. 20 after a 34-31 loss to Alabama A&M -- UAPB's fifth loss in a row. The team lost their next three games under interim coach Don Treadwell before beating Alabama State 19-14 in the season finale.

In an effort to ensure that it would make the best decision, UAPB took a deliberate approach in finding Gamble's long-term replacement, which extended beyond the opening day of the NCAA's early signing period for Division I football players in December. That forced the Golden Lions to miss out on signing any potential recruits, but Hampton said he isn't fretting about that aspect at all.

"I'm going to do more with less, me and my coaches," said Hampton, who touched on an array of subjects, including overall recruiting, academics and discipline as well as the name, image and likeness phenomenon that's affecting college athletics as a whole. "What we'd like to do is be able to sign about five to six local student-athletes in February. That'll get us a chance to go through spring ball, I get my offensive coordinator in, I get my defensive coordinator in, and I get my special teams coordinator in, and we'll all sit down and figure out which guys we need to target and move forward.

UAPB Athletic Director Chris Robinson said he has full belief that Hampton, who was an assistant coach on the team's staff from 2006-10, is the right guy for the Golden Lions.

"He's a winner," Robinson said of Hampton. "He told me a story a while back that he ran against Basil Shabazz and Carl Kidd in the 100 and 200. He realized, after he kept running against them, that these guys were really running. So what he did, he went and found his niche.

Hampton was the defensive coordinator at Warren -- his alma mater -- from 2000-03, where he helped the Lumberjacks win two state championships. He served as the head coach at Dumas from 2004-05 until he made the jump to UAPB for five seasons. He would later make coaching stops at other collegiate programs such as Western Kentucky, South Florida, Florida State, Oregon, the University of Arkansas and Louisiana-Monroe.

He's now back at a place that he said he fully intends to turn into a consistent threat in the SWAC.

"The [Florida A&Ms], the Jackson States, the Southerns, we're chasing that. We're not going to run from that. I wake up every day motivated. I like to win, and all I've ever done is win."

Hampton at a glance