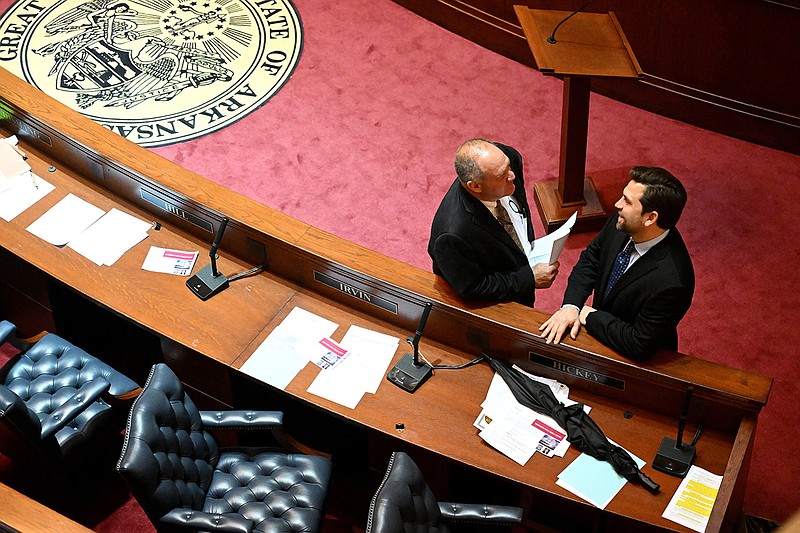 A bill allowing members of municipal fire department bomb squads to make arrests and carry firearms passed in the House with a vote of 71-9 on Wednesday.

Rep. Stephen Meeks, R-Greenbrier, urged colleagues to approve the bill, saying their votes could determine whether bomb squad technicians are able to defend themselves when responding to potentially dangerous situations.

"If we don't do this today, it's your fault and my fault if one of these guys loses their life because they are not able to defend themselves," Meeks said.

In discussions Tuesday, Faulkner County Sheriff Tim Ryals and the president of the Arkansas Sheriffs' Association raised concerns about the arrest authority granted to bomb squad technicians under the bill, according to Meeks.

Without the ability to make arrests, Meeks said bomb squad members could not be deputized by federal authorities to assist in emergencies in other states. Meeks promised the bill would be amended in the Senate to address concerns raised by the sheriffs and to better define training requirements for technicians.

"The bomb squad technicians, the other federal agencies involved in this and the sheriffs, we're going to continue to talk so we can work through that," he said. "If we can come to some sort of happy ground, we will amend the bill that way. If we cannot, we will remove that arrest authority altogether."

In its current form, the bill would allow bomb squad members to make arrests only for "violations of the law related to explosives and incidents involving explosives."

Before the vote, some lawmakers asked why the bill couldn't stay in the House until the amendments were made. Meeks said he wanted to keep the bill moving after it cleared the House Judiciary Committee on Tuesday.

Little Rock, Conway and Fort Smith are the only municipalities in the state that currently have bomb squads attached to their fire departments.

The House State Agencies and Governmental Affairs Committee on Wednesday endorsed a bill requiring that all state and national flags purchased with taxpayer funds in Arkansas be manufactured in the United States.

The sponsor of House Bill 1023, Rep. Jack Fortner, R-Yellville, described the legislation as a simple bill lawmakers "probably should have passed sooner." Fortner clarified that flags given out to constituents were already made in the U.S. and that he was not involved in the production of flags.

No one spoke in opposition of the bill. The House panel approved the measure without audible dissent.

The committee also approved a resolution urging Congress to permanently extend the Tax Cuts and Jobs Act of 2017. Rep. David Ray, R-Maumelle, said he was sponsoring House Concurrent Resolution 1001 in hopes of preserving the income tax cuts included in the federal law set to expire in 2025.

No opposition was voiced during the meeting and the resolution passed without audible dissent.

Two bills that would make Day Light Saving Time permanent in Arkansas did not advance from the committee.

House Bill 1104 sponsored by Rep. Scott Richardson, R-Bentonville, was voted down in a voice vote by committee members.

The Arkansas Senate approved on Wednesday two bills signing off on funding for the Arkansas Beef Council and the Arkansas Catfish Promotion Board.

Senate Bill 12 appropriates $1.07 million for the Arkansas Beef Council for the fiscal year ending June 30, 2024. The council is a state agency that promotes, researches and oversees the beef checkoff program. Most of the funding approved, $1.04 million, will go toward research and development.

The Arkansas Catfish Promotion Board "supports the growth and development of the catfish industry in Arkansas through research, promotion and market development," according to the Department of Finance and Administration. The board is funded through a one-dollar-per-ton assessment on all catfish feed.

Both bills have moved to the House for consideration.

Legislative liaisons do not work for a salary and are instead paid a per diem every day the General Assembly is in session.

The calendar of public events of the 94th General Assembly for today, Day 6 of the 2023 regular session. The legislative calendar is at https://www. ark-leg.state.ar.us 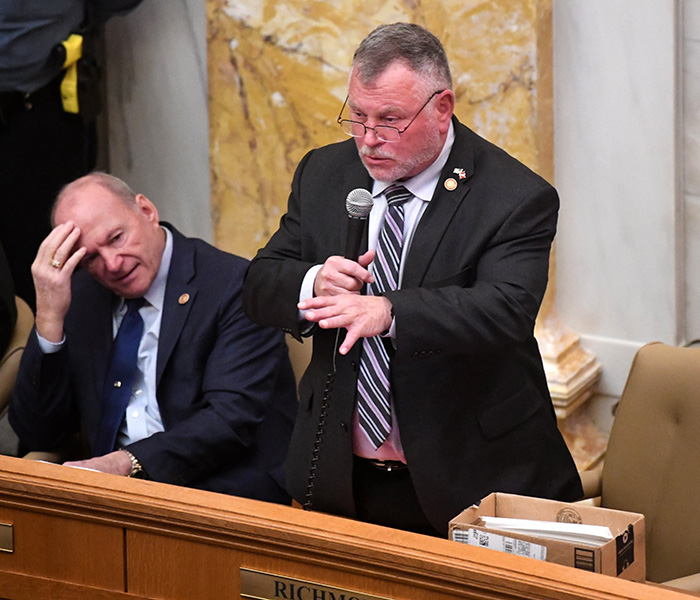 Rep. Marcus Richmond, R-Harvey, asks a question Wednesday in the House during presentation of a bill to allow members of municipal fire department bomb squads to carry weapons and make arrests. The measure, House Bill 1018, was approved 71-9 despite concerns voiced by some law enforcement officials. (Arkansas Democrat-Gazette/Stephen Swofford)