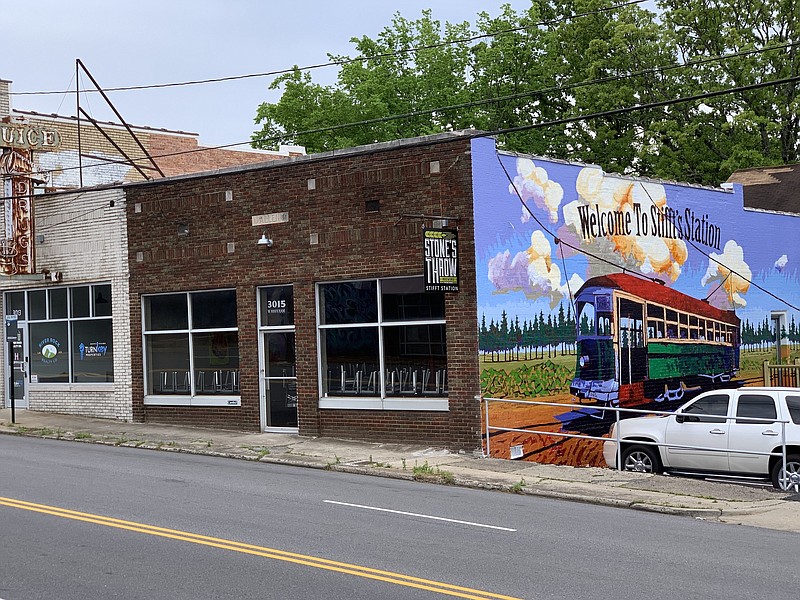 Over the weekend, Heights Corner Market, 5018 Kavanaugh Blvd., in Little Rock's Pulaski Heights, moved, lock, stock and fridge, entirely into the "penthouse" space on the building's south side that most recently housed its Green Room restaurant. Co-owner Eric Herget explains that "our lease was up and we needed to make a decision on what was best for the store." The new setup debuted Monday.

They've kept the kitchen, and will continue to sell prepared dishes, primarily for breakfast and lunch; they're keeping one table for patrons to dine in, but they'll mainly do pickup and to-go orders. "We no longer have the footage to operate a seated restaurant at the capacity we have in the past," Herget and his wife, Lou Anne, explain in an Instagram post. "We will offer a regular take-out dinner menu Wednesday-Saturday and we plan to add additional nights in the future." "You can still grab a sandwich, and if you want a steak for lunch, we'll make you a steak," Herget adds.

Meanwhile, they're placing their focus on the grocery side of the business. "All the grocery services are still there," Herget says, but in a smaller space, "just about every square inch" is occupied by stuff for sale, giving it a "bodega-like feel," he says. The entire staff has remained. "Everything you currently procure will still be available and we will announce new product offerings soon as we become more specialized," the Instagram post assures. "There are no other changes to our mission other than the restaurant dine-in operation."

Marty's Place Restaurant Bar and Grill has opened in the former IHOP at 11501 Maumelle Blvd., on the North Little Rock verge of Maumelle. Hours are 4-10 p.m. Tuesday-Thursday, 4-11 p.m. Friday-Saturday. The website, martysplace.net, is still under construction but you can find the menu there. (501) 365-8755.

Stone's Throw Brewing is closing its Stifft Station Taproom, 3015 W. Markham St., in mid-February. "Every business has to adapt and grow, and that time has come for Stone's Throw Brewing. The Little Rock nano-brewery, which will celebrate its 10-year anniversary this summer, is streamlining to focus more on distribution and their original Ninth Street location," explains Managing Partner Theron Cash in a news release. Adds Brewing Partner Ian Beard, "We have had a great experience in Stifft Station, and have truly appreciated all the support the neighborhood has shown us since opening our taproom doors in 2019. But as we enter the brewery's second decade, we decided it was time for a new direction, and a satellite taproom just wasn't part of the equation." It may or may not be a factor that, as you may recall, there are plans to convert that stretch of West Markham Street to restrict vehicle traffic and increase walking and bicycle access. Until closure, the taproom hours remain 4-9 p.m. Tuesday-Thursday, 4-10 p.m. Friday-Saturday, noon-9 p.m. Sunday. The phone number is (501) 379-8663.

A reader reports that the former Regions Bank at 8023 Cantrell Road, Little Rock, between an apartment complex and Graffiti's, has been demolished to make room for the 7 Brew outlet we reported last month was coming there. 7brew.com; facebook.com/7brewcoffee.

Coffee shops Mugs Cafe in the Heights and Mylo's in Hillcrest experienced major staff disruptions recently. (Democrat-Gazette file photo/Eric E. Harrison & Stephen Swofford)
We're told that an investor group that recently bought several area coffee shops — the two outlets of Mugs Cafe (in North Little Rock's Argenta and Little Rock's Pulaski Heights), Mylo's (in Hillcrest) and Leiva's (in west Little Rock) — made some, well, unfortunate decisions. We've been unable to confirm just what went wrong (an unsubstantiated report is that they lowered wages across the board and instituted a tip-share program to make up the difference). But whatever it was affected staff and service over the past couple of weeks for certain at Mugs in the Heights and reportedly at Mylo's. Kitchen chaos at Mugs on Jan. 8 backed up food orders anywhere from 35 minutes to more than an hour and many menu items weren't available; counter staff was pitching and discounting pastries as an alternative, or, in a pinch, to sustain customers during their long wait for their breakfasts. Meanwhile, at Mylo's one recent morning, according to unconfirmed social media and second-hand reports, the entire staff, including the new manager, walked out en masse.

And In-N-Out, the fabled Baldwin Park, Calif.-based burger chain with locations as far east as Texas, has announced plans to expand eastward — not into Arkansas, at least not yet, but into Tennessee. In a news release, the company announced plans to open restaurants in Nashville and the surrounding areas, as well as "an Eastern territory office in the city of Franklin." The first of those Tennessee restaurants is expected to open by 2026. That doesn't mean, however, that In-N-Out doesn't eventually plan to expand elsewhere, by the way; food site The Takeout (thetakeout.com/in-n-out-burger-new-location-nashville-tn-expansion-1849976502?utm_source=YPL) tells us that company owner Lynsi Snyder has hinted that other states, presumably in the southeast, could also someday get In-N-Out outlets. In-N-Out so far has 385 locations throughout California, Nevada, Arizona, Utah, Texas, Oregon and Colorado. in-n-out.com.