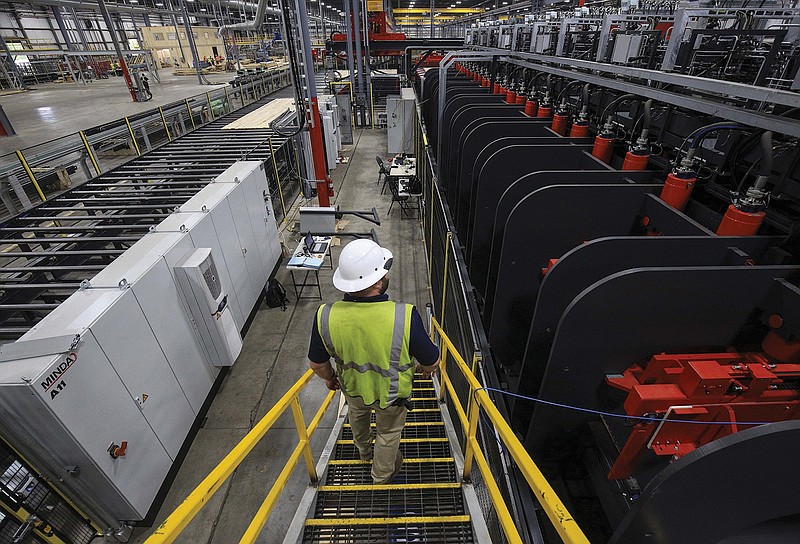 Structurlam Operations Manager Hayes Anthony walks through the Conway facility on May 3, 2021, as the plant geared up to make laminated wood products for a new Walmart headquarters in Bentonville. With the cancellation of the contract, the plant has suspended operations and about 144 workers have been laid off. Company chief Matthew Karmel said new customers are being sought for the plant, which he said has the capacity “sufficient to construct a 200,000-square-foot office building every two months.” (Arkansas Democrat-Gazette/Staton Breidenthal)

Structurlam Mass Timber Corp. announced Wednesday it will reduce production staff and suspend operations in Conway after Walmart canceled work with the manufacturer. The move led to about 144 employees being laid off.

The announcement is just three years after the manufacturer said it would invest $90 million to set up its first U.S.-based production facility in Conway. The plant was established to provide laminated wood products for Walmart's new Bentonville headquarters campus.

"Decisions like this are never easy, especially when they impact our people," Matthew Karmel, chief executive officer of Structurlam, said Wednesday in announcing the suspension and layoffs.

"During the initial period of production, Walmart was the exclusive customer for the Conway plant," Karmel said. "The plant is now in a position to be able to serve other customers."

In a statement Wednesday, Walmart said that it "was informed today by Structurlam's CEO that they suspended operations of their mass timber factory ... While this is a disappointing outcome that impacts many parties, we are proud of the significant financial and operational support Walmart has provided Structurlam since 2019. Walmart remains excited about using mass timber on our new Home Office campus and will continue to seek alternate sources of mass timber for the project. We will use as much material from our home state of Arkansas as feasible."

Since the company is no longer constrained by its exclusive production agreement with Walmart, it now has the ability to support new customers with more than 1 million cubic feet annually of laminated pine.

Production has been halted and a small team of employees is being retained while the company scouts for new business.

"We had to make the difficult decision to lay off 144 employees." Karmel said Wednesday. "We have retained a small team of 24 employees to maintain the plant while the company pursues new customers."

Structurlam has massive production capabilities, according to Karmel.

"To put this into context, the state-of-the-art Conway plant has a capacity sufficient to construct a 200,000-square-foot office building every two months," he added.

State economic development officials did not have advanced notice of the production halt.

"We had no indication from the company this was coming," Clint O'Neal, executive director of the Arkansas Economic Development Commission, said Wednesday.

While the news is disappointing, O'Neal noted the manufacturer has made a substantial investment in Conway it is unlikely to walk away from.

"This was a great project when it was announced and I'm hopeful they'll get back on their feet," O'Neal said. "They have great technology in place and I'm hopeful this plant in Conway is going to be a good long-term investment for them and they're going to get back up and running."

Structurlam was set up as an Arkansas-centric production facility. The company was going to harvest pine grown in the state as its material source and then create product to be used by Walmart for its sprawling new Bentonville headquarters.

The project was initially announced in December 2019 as a strategic partnership with Walmart, including an equity investment from the retailer to lure the plant to Conway.

Dan Bartlett, executive vice president of Walmart corporate affairs, was on hand for the launch announcement and noted the retailer's commitment to the project. Walmart approached Structurlam and decided to invest in production to bring the company to Arkansas, Bartlett said at the time.

"This was more than just a purchase order for us," Bartlett said. "We understood the capital investment it would take to do this here and that's when the conversation shifted to what it would take for us to be a financial partner."

Officials did not elaborate on the contract issue. "We had a commercial dispute, but we cannot discuss the specifics," Karmel added.

For now, the focus is finding new customers and new business to restart operations, Karmel said.

"We are working diligently to identify new solutions for resuming operations at the plant, including bringing on new customers," Karmel added. "We do not currently have a timeline for when production would restart."

Plant Manager Jody Doak was appreciative of the Conway community and employees for their continued support.

"We are grateful for the contributions and hard work of the Conway employees and we anticipate the prospect of welcoming them back with new customer projects," Doak said.

The 288,000-square-foot facility originally was built to manufacture steel fasteners for Nucor Steel.