IN THE GARDEN: Don't prune too early — damaged foliage may help protect still living plants in another freeze 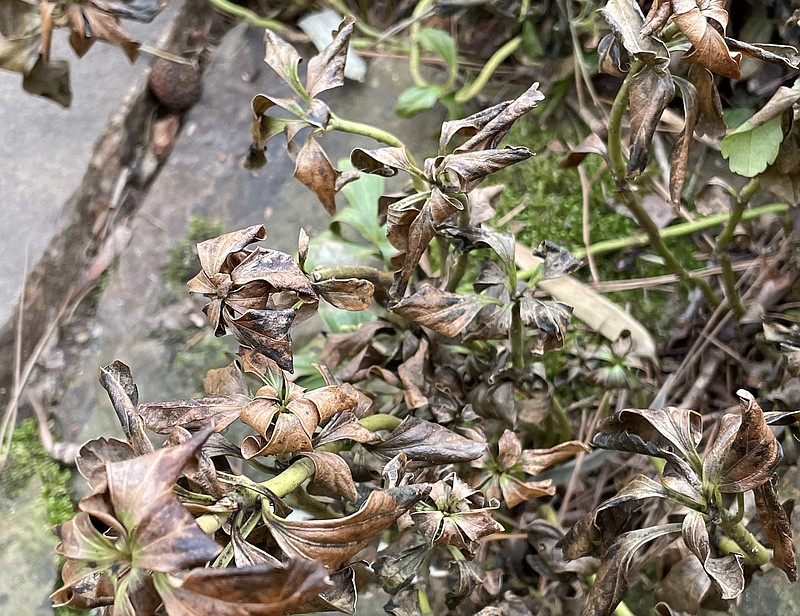 Damaged leaves on this pachysandra will act as a buffer should harsh winter weather attack again. (Special to the Democrat-Gazette)

Q: Is my pachysandra down for the count after the Christmas freeze? Should I whack it now like monkey grass and see what happens in the spring? It has never looked like this before, and I'm worried.

A: There are a lot of plants that look horrible after the December freeze. I have seen a lot of damage on pachysandra, ajuga and even liriope.

For now, try not to look at it, because it is too soon to cut back. There is still green in your plants, so hopefully, in late February to early March, you can cut back the damage and let the plants regrow. Some plants have no green and might not rebound, but we still have the potential for winter weather through February, so don't expose the plants to more damage by cutting back now. 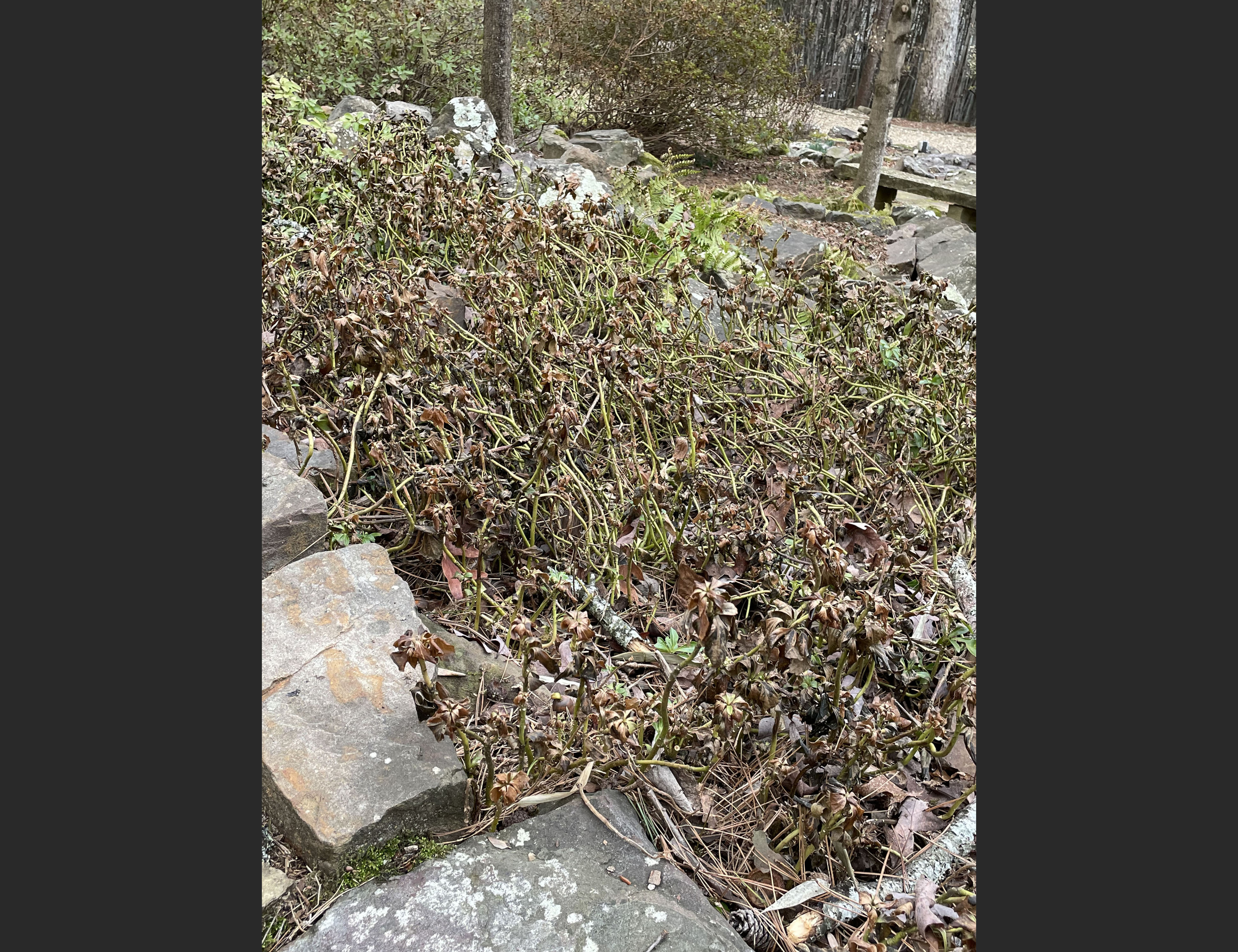 The green growth on this winter-clobbered pachysandra suggests it can recover, if it's not zapped again or pruned too early. (Special to the Democrat-Gazette)
Q: I have the following plants that look dead after the cold weather we had. I live in west Little Rock. Gardenia bush, Knockout roses, azaleas (Judge Solomon, Hino, Encore) and an evergreen hedge — I don't know the type. It was here when I moved here 26 years ago. All of these look dead. Can I do anything now or just wait and see what happens in the spring?

A: My email account is loaded with similar questions. Unfortunately, almost every landscape has the same problems. Do nothing until winter is over. I do think we will be replanting a lot of plants this coming spring, but let's hope we are being pessimistic and they all miraculously rebound. For the roses, prune as you normally would — in late February. For the azaleas and gardenias, see where new growth begins in the spring and cut back to that. For the hedge, same thing. Some plants may just have some leaf burn, while others might be dead to the ground and yet re-sprout from their root system; and some may have to be replaced. Time will tell, but we don't want to cut them back and expose what's left to any future winter weather this season. Keep your fingers crossed that we get nothing more — we have had more than our share of winter damage already.

Q: We suddenly have lost most leaves on two hollies at, or near, our front entrance ... while four other hollies in front and on the side remain healthy. Patches originally turned brown and began to fall and eventually all of the leaves fell. Are they diseased or is this related to the zero overnight lows last month? Will they recover? The first two pics are of the dying hollies. The third is a pic of one of four identical healthy hollies. You will also note in the background of the first pic our neighbor's holly showing same signs. Thanks. Your column is great service to Arkansas Democrat-Gazette readers.

A: There are hundreds of varieties of hollies, and some are less winter hardy than others. I do think the damage you are seeing is a result of the extremely low temperatures. I have seen some hollies, along with other normally evergreen shrubs, that have shed a lot of damaged leaves. As with the answers in the questions above, do nothing for now. I would be surprised if the hollies don't rebound after a light shearing this spring; but leave the damaged foliage or dead branches as added winter protection until late February or early March, and then begin the assessment and pruning chores.

Q: I've noticed that my monkey grass has turned brown, or died, after the late December winter freeze. Should I prune now or wait until some green leaves, hopefully, begin to "peek" through next month? Can you offer any hope for azaleas that were badly "bitten" by the harsh weather? Thank you, as always, for your sage advice.

A: While liriope, or monkey grass, is normally evergreen, it often looks pretty ragged after a growing season. To refresh the plant, I recommend pruning it an inch or two from the soil line in late February or early March. This removes any old, damaged leaves and helps the plant look more vibrant. When you do get ready to cut it back, pull back the dead leaves to look for green growth. You don't want to cut back the tips of any new foliage. I would be surprised if liriope actually was killed by the cold, but it was very unusual weather for us — as evidenced by the amount of damage we have everywhere. As to azaleas, some seem more damaged than others, and varieties do differ as to cold tolerance. Wait for spring to see where new growth begins before pruning. I doubt we will have many (if any) blooms, but we can always hope.