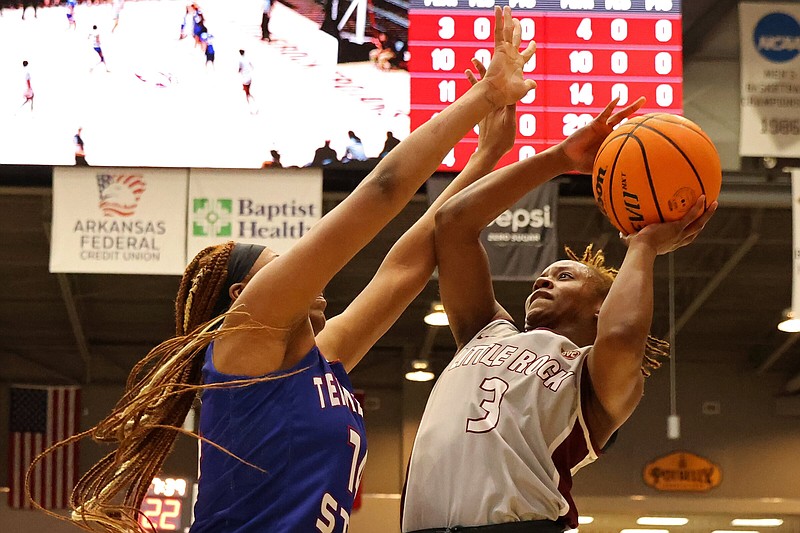 UALR guard Jayla Brooks (right) goes up for a shot over a Tennessee State defender Saturday during the Trojans’ 42-36 victory over the Tigers at the Jack Stephens Center in Little Rock. More photos at arkansasonline.com/122womensbball/. (Arkansas Democrat-Gazette/Colin Murphey)

With the exception of the early minutes of a game, it's rare for any single player to match an opponent's entire team in scoring.

For a player to do that in the middle of the third quarter is almost unheard of.

University of Arkansas-Little Rock Sali Kourouma found a way to almost singlehandedly will the Trojans past Tennessee State Saturday afternoon, scoring 25 points in UALR's 42-36 at the Jack Stephens Center in Little Rock.

Excluding the third quarter -- when the Tigers scored 17 points and shot 6-of-17 from the field -- Tennessee State made just eight field goals on 25 attempts, and the visitors turned the ball over 21 times in the game.

But a win alone wasn't enough to satisfy the Trojans.

"This was not a happy win," Kourouma said. "We didn't play like the way we're used to, and today we were just off. So we have to be better than that."

The sentiment was shared by UALR Coach Joe Foley, who was most bothered by his team's offensive performance -- 17-of-60 shooting from the field with 13 turnovers.

"You can't win shooting the ball like that," Foley said. "I don't think you're going to be happy [about winning] when you don't play well, regardless. I didn't think we played that well either way."

A rock fight of a game, the Trojans carried a 17-13 advantage into the locker room, but they quickly stretched things out to 24-15 as Korouma scored all seven points in a 7-2 spurt during the first 3:21 of the third quarter.

The Tigers countered with a 15-5 run of their own during the next six minutes, twice grabbing momentary leads at 28-27 and 30-29.

But an elbow-extended jumper by Jaiyah Harris-Smith put UALR (10-9, 7-1) back in front after three quarters, and Kourouma's lone three-pointer of the game in the first minute of the fourth quarter gave the Trojans some much-needed breathing room.

"I was like, 'I have to step up because this is not the way I play,'" Kourouma said, pointing to the fact that she had scored just eight points at halftime. "My shot was not going in and I was like, 'Okay, I need to focus.'"

Not only were Kourouma's 25 points the most scored by any player against Tennessee State (7-12, 2-6) this season, but it was the fourth straight game played by the Malian in which she's scored at least 20 points.

Afterward, Kourouma said she's still working her way back into shape after missing the entire first semester due to visa issues.

Yet, Kourouma has been as key a piece as any to UALR, which remains a game behind Eastern Illinois for first place in the Ohio Valley.