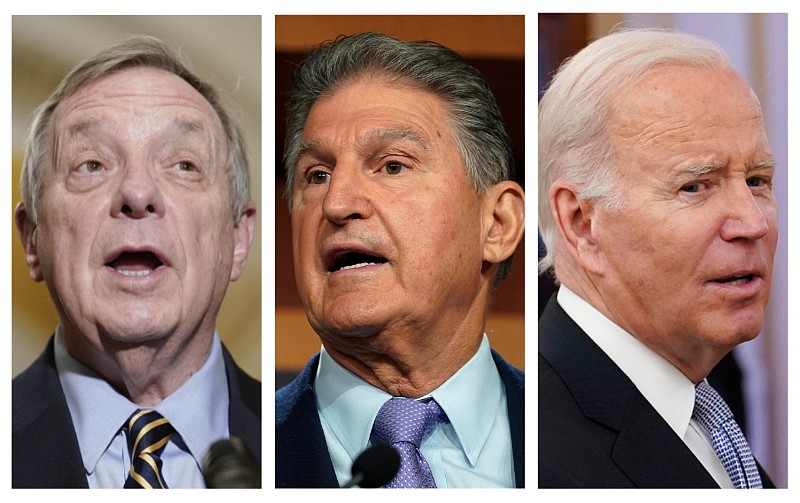 From left, Sen. Dick Durbin, D-Ill.; Sen. Joe Manchin, D-W.Va.; and President Joe Biden are shown in Washington in these 2022 and 2023 file photos. Senior Democratic lawmakers have turned sharply more critical of Biden’s handling of classified materials after the FBI discovered additional items with classified markings at Biden’s home. Durbin declares Biden should be “embarrassed,” while Manchin is urging the president to tell the public, “‘Look, I was irresponsible.’” (Left and center, AP/Mariam Zuhaib; right, AP/Susan Walsh)

WASHINGTON -- Senior Democrats, dismayed by a steady stream of startling disclosures, expressed criticism Sunday over how President Joe Biden handled classified material after leaving office as vice president and disappointment that the White House has not been more forthcoming with the public.

Lawmakers who might have anticipated questions focusing on the debt limit or Ukraine aid when they were booked last week for the Sunday news shows found themselves quizzed about the latest development over the weekend in the document drama that has put Biden's presidency on the defensive: During a search Friday of Biden's home in Wilmington, Del., the FBI found additional documents with classified markings and took possession of some of his handwritten notes, the president's lawyer said Saturday.

Biden should be "embarrassed by the situation," said Illinois Sen. Dick Durbin, the second-ranking Democrat in the Senate, adding that the president had ceded the moral high ground on an issue that has already entangled former President Donald Trump. Special counsels appointed by Attorney General Merrick Garland are investigating both cases.

"Well, of course. Let's be honest about it. When that information is found, it diminishes the stature of any person who is in possession of it because it's not supposed to happen. ... The elected official bears ultimate responsibility," Durbin said.

Sen. Joe Manchin, D-W.Va., said Biden "should have a lot of regrets. ... You just might as well say, 'Listen, it's irresponsible.'" The president told reporters Thursday that he had "no regrets" over how and when the public learned about the documents and that there was "no there there."

Despite their criticism, Biden's fellow Democrats defended what they said was his cooperation with the Justice Department as the search for additional classified material unfolds. They contrasted it with Trump's resistance to efforts to recover hundreds of documents after he left office.

"It is outrageous that either occurred," Durbin said. "But the reaction by the former president and the current president could not be in sharper contrast."

Biden voluntarily allowed the FBI into his home Friday, but the lack of a warrant did not dim the extraordinary nature of the search. It compounded the embarrassment to Biden that started in earlier in January with the disclosure that the president's lawyers had found a "small number" of classified records at a former office at the Penn Biden Center in Washington shortly before the Nov. 8 elections.

The White House has disclosed that Biden's team found classified documents and official records on three other occasions in recent months -- in follow-up searches Dec. 20 in the garage of his Wilmington home and on Jan. 11 and 12 in his home library.

The discoveries have become a political liability as Biden prepares to kick off his 2024 reelection bid, and they undercut his efforts to portray an image of propriety to the American public after the tumultuous presidency of his predecessor, Trump.

Manchin excoriated both men for their handling of sensitive security documents. "It's just hard to believe that in the United States of America we have a former president and a current president that are basically in the same situation," he said. "How does this happen?"

At the same time, Democrats worried that Biden's travails have created an opening for newly empowered House Republicans.

"We have to worry, since this new group that has taken over control of the House of Representatives has promised us endless investigations, confrontations, impeachments and chaos, what is going to happen," Durbin said.

The chairman of the House Oversight and Accountability Committee, Rep. James Comer, R-Ky., said he took Biden "at his word when the first set of documents were found. ... But now this [has] gone from just simply being irresponsible to downright scary."

The Justice Department says Trump took hundreds of records marked classified with him upon leaving the White House in early 2021 and resisted months of requests to return them to the government. Biden has willingly turned over the documents once they are found. But the issue is wearing on Biden and his aides, who have said they acted quickly and appropriately when the documents were discovered and are working to be as transparent as possible.

Durbin appeared on CNN's "State of the Union," Manchin was on CNN and NBC's "Meet the Press" and Comer was interviewed on Fox News Channel's "Sunday Morning Futures." 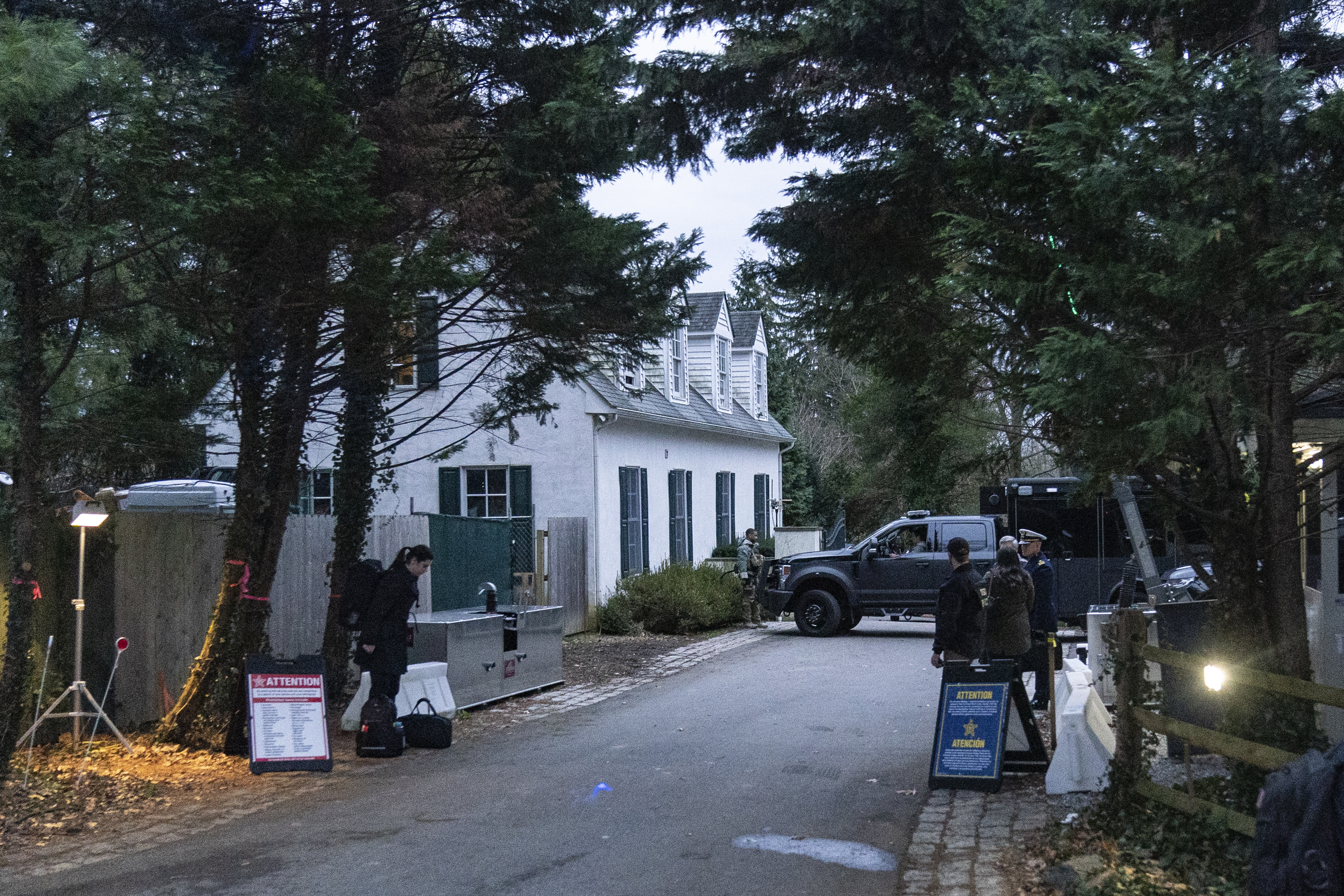 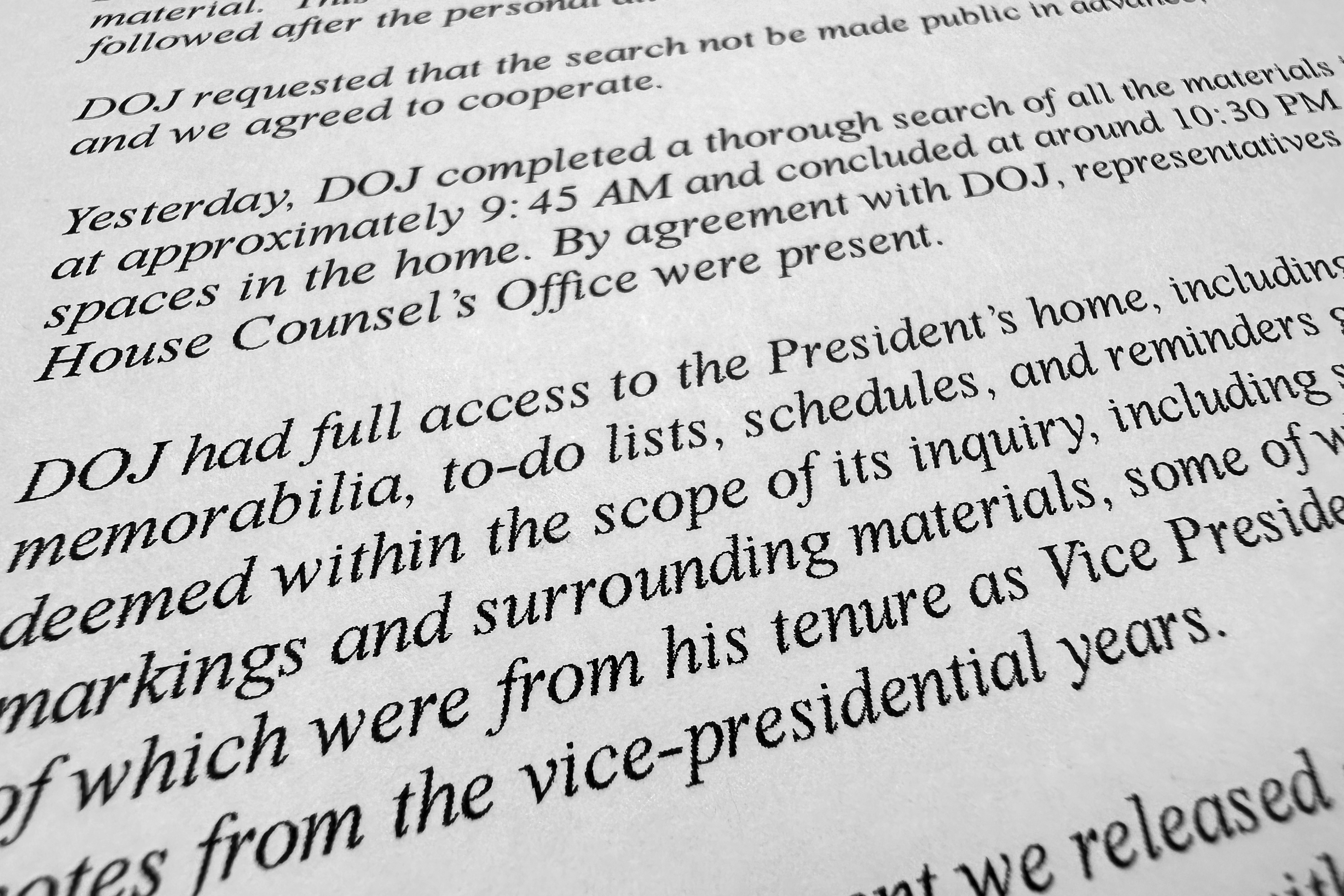 FILE - The statement by President Joe Biden's personal attorney Bob Bauer is photographed on Saturday, Jan. 21, 2023. Another search, this one by the FBI at Biden's home in Wilmington, Del., has turned up more documents containing classified markings. Bauer says in the statement that the Jan. 20 search overseen by the Justice Department lasted nearly 13 hours. (AP Photo/Jon Elswick, File) 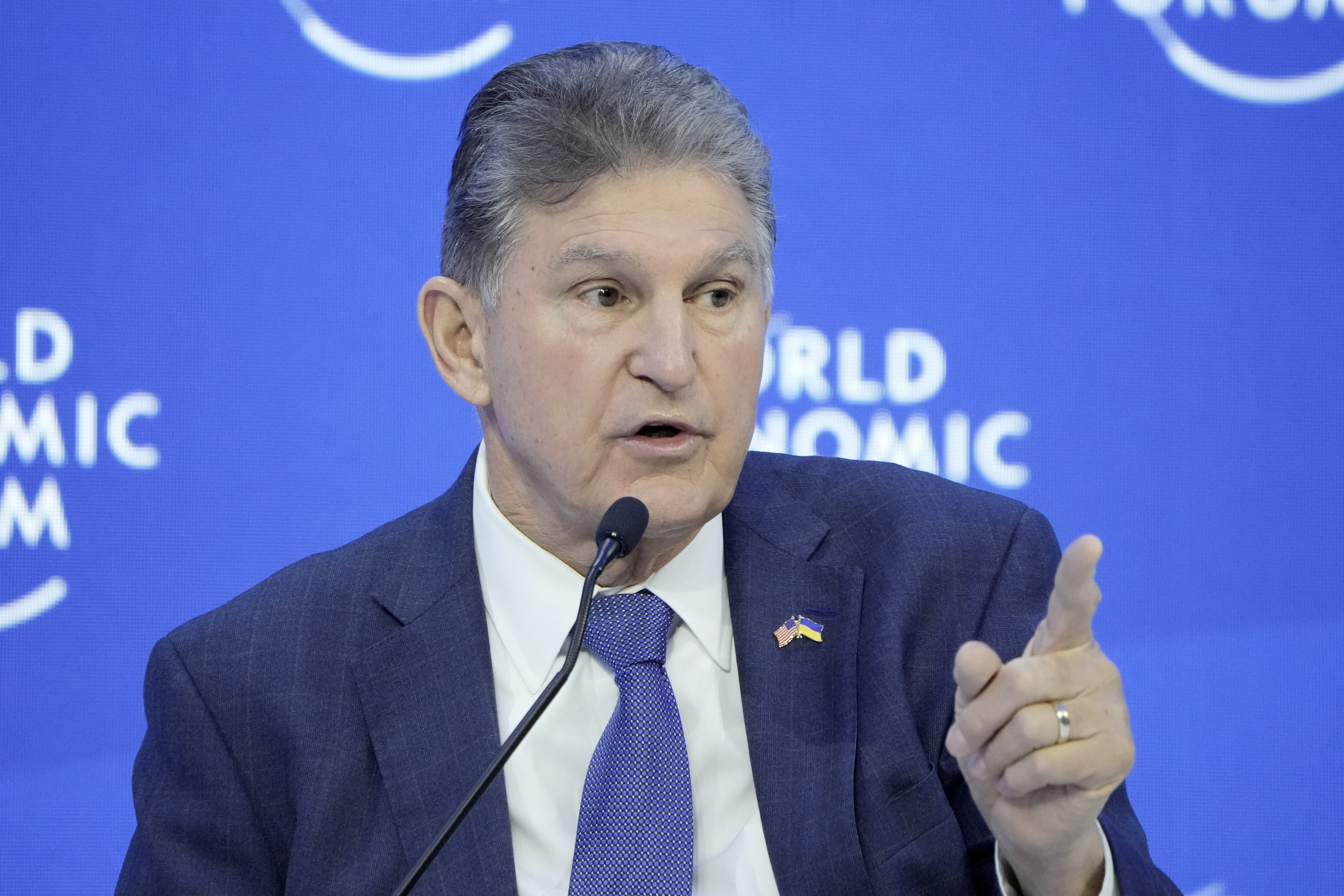 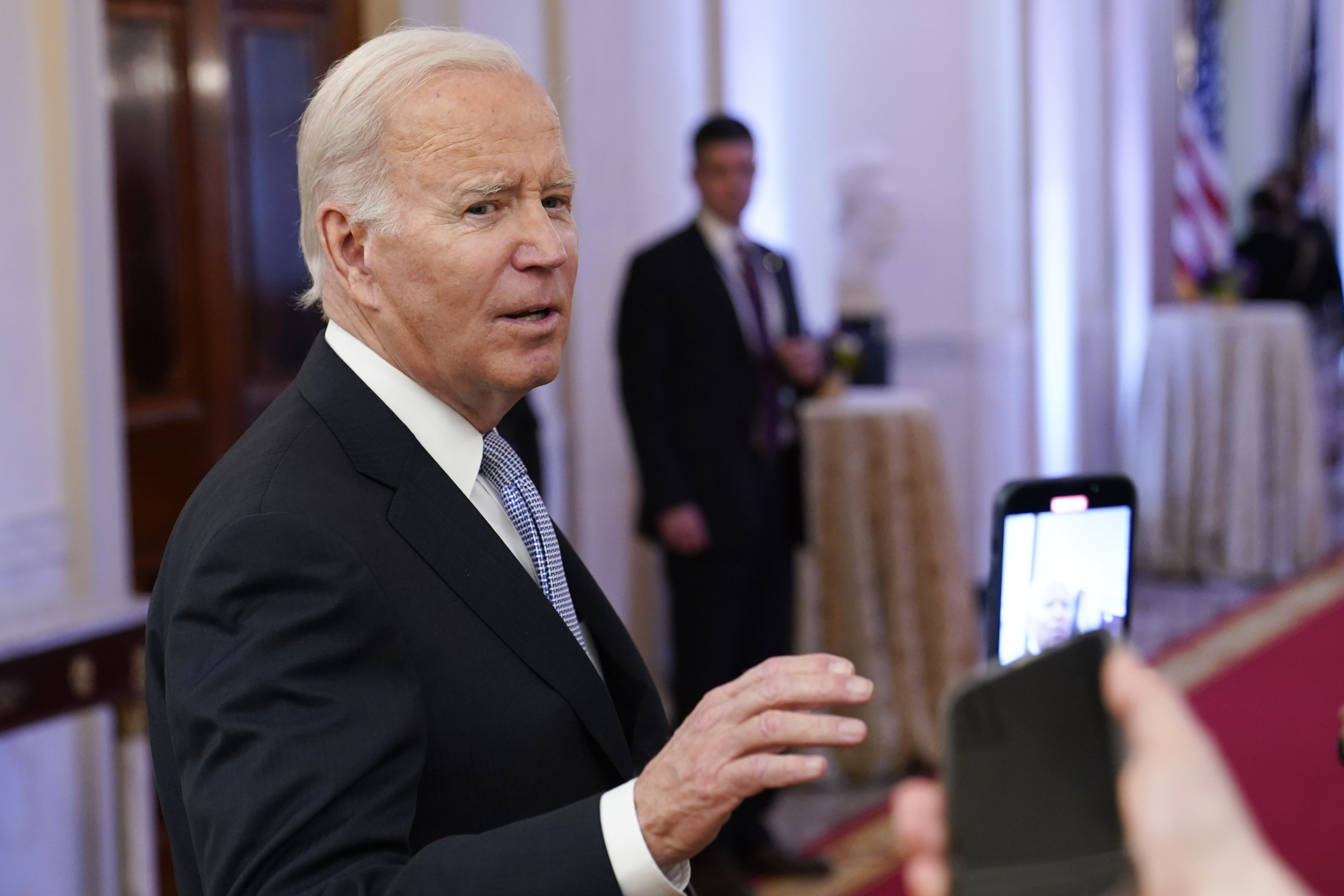