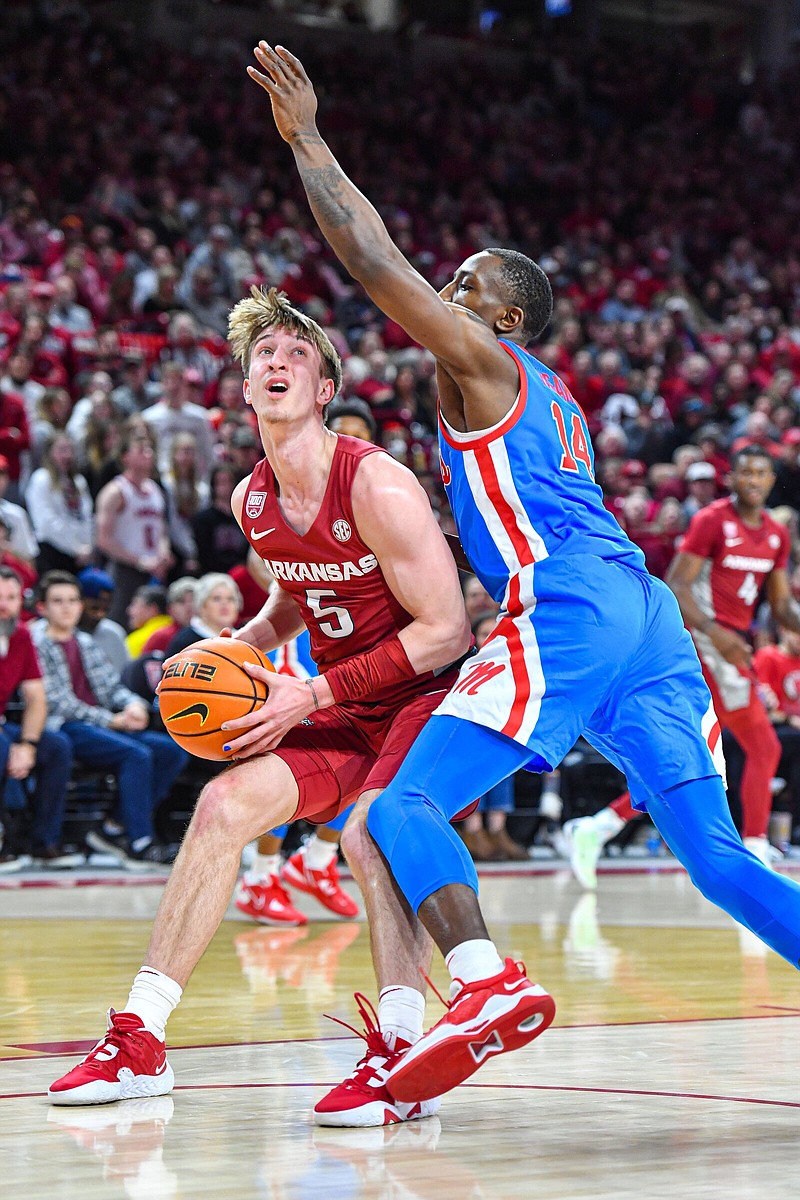 FAYETTEVILLE -- When Joseph Pinion was in Saturday's game against Ole Miss, good things happened for the University of Arkansas basketball team.

The No. 25 Razorbacks were a plus-17 with Pinion playing 22 minutes in Arkansas' 69-57 victory over the Rebels in Walton Arena.

Pinion, a 6-5 freshman guard from Morrilton, matched his season-high with 13 points and hit 5 of 10 shots, including 3 of 6 three-pointers.

After there were nine lead changes in the first half, Pinion scored eight consecutive points in the final 2:59 before halftime to help the Razorbacks take the lead for good at 32-29.

"I thought [Pinion] coming in and catching and shooting, it kind of flipped the game a little bit," Ole Miss Coach Kermit Davis said.

But Pinion did a lot more than shoot the ball well. He also finished with a season-high 5 rebounds, 1 steal and 1 blocked shot without a turnover.

Pinion's first block of the season came when he rejected an attempt inside by 6-6 Myles Burns.

"I thought Joseph really played well," Musselman said. "There are a lot of things that go into decision-making [for playing time], and Joseph rebounded the ball."

Pinion had 9 rebounds in 98 minutes coming into the Ole Miss game.

"We felt there were a couple good matchups for him defensively. Certainly from an offensive standpoint, there is no doubt Joseph can help us and stretch the floor out."

Pinion initially came into the game with 11:19 left in the first half to give Black a short rest. He went back to the bench with 10:10 left as Black re-entered the game.

Pinion went back in for Derrian Ford at the 3:17 mark of the half and the Razorbacks needing an offensive spark with Ole Miss leading 25-24, and he hit a layup 18 seconds later.

"I give Joseph a lot of credit for his confidence shooting the ball," Musselman said. "When he comes in games, he is locked and loaded and shot ready."

The only Razorback with a better plus-minus stat than Pinion on Saturday was freshman guard Anthony Black, who had 17 points, 8 assists and 5 steals in 37 minutes.

Pinion also scored 13 points in Arkansas' only other SEC victory, when the Razorbacks beat Missouri 74-68 at home on Jan. 4. He hit 4 of 7 shots, including 3 of 6 three-pointers, in a season-high 27 minute.

"It was huge," Arkansas freshman forward Jordan Walsh said of Pinion's impact in helping the Razorbacks beat Ole Miss. "Just like the first time we played Mizzou, he was a big catalyst of that win.

"So I feel like now we're seeing a pattern here where Joseph, whenever he's having a big game, then the team's better. The morale's up and we're winning."

Pinion played a combined 10 minutes in Arkansas' three games prior to Ole Miss. He didn't play against Alabama, played 9 minutes at Vanderbilt and 1 minute at Missouri.

"Joseph did a really good job staying ready," Musselman said on Arkansas' radio show after the Ole Miss game. "He played his minutes at a high level."

"When we're able to make threes, like Jordan Walsh did and obviously Joseph Pinion, those two guys in particular opened up dribble-drive angles for other people," Musselman said.

With Pinion getting increased playing time, starting junior guard Ricky Council -- the Razorbacks' leading scorer at 17.2 points per game -- had a season-low for points (2) and minutes (18).

Council, who came into the game averaging 35.3 minutes to lead the SEC, shot 1 of 6 with 3 turnovers.

After Council hit his only basket on a drive with 19:45 left, he missed a jumper, then had a turnover.

Pinion came in with 18:37 left for Council, who watched the rest of the game from the bench.