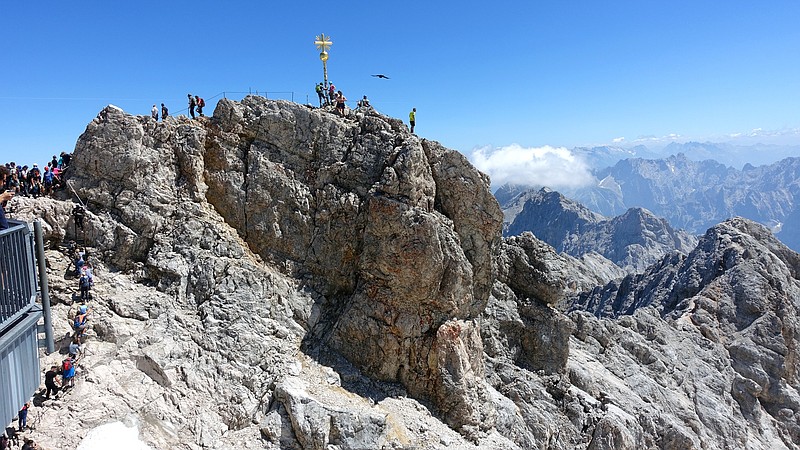 A golden cross marks the top of the 9,700-foot Zugspitze, the highest point in Germany. The mountain straddles the border between Germany and Austria, and lifts from both countries whisk visitors to the top. (Rick Steves/TNS)

One of my favorite places to be in Europe is atop the Zugspitze — the highest point in Germany. Standing on this 9,700-foot peak, you can't help but marvel at the thought that you're the highest person in the entire country — number one out of 82 million. From here, facing south, I feel like a maestro conducting a symphony of snowcapped peaks as the mighty Alps stretch seemingly forever to the right and left.

The Zugspitze also marks the border between Germany and Austria. Before Europe united, you had to show your passport just to walk across this mountaintop.

Lifts from both countries meet at the top. As if waging an epic battle of alpine engineering, just a few years after the Austrians built a cable car to their Zugspitze station, the Germans drilled through the mountain in 1931 so that a cogwheel train could deposit nature lovers on a glacier just below their side of the summit.

Today, whether you ascend from the Austrian or German side, you can straddle the border between two great nations while enjoying an incredible view. Restaurants, shops, a small museum, and telescopes await you at the summit.

There are two separate terraces — Bavarian and Tirolean — connected by a narrow walk, which was the border station. Crossing used to be a big deal — you'd get your passport stamped at the little blue house and shift your currency from shillings to marks. While the border formalities are long gone, regional pride still shines here. You'll notice no German or Austrian national banners but regional ones instead for "Freistaat Bayern" and "Land Tirol."

The views are equally breathtaking on each side of the border. On the German side, the Zugspitzplatt glacier stretches before you. Is it melting? For many summers, a vast reflector was spread out on the ice to try to slow the glacier's shrinking due to global warming. From here, ski lifts fan out as if reaching for the ridge that defines the border between Germany and Austria.

Below you in the snow stands the "Hochzeitskapelle" — wedding chapel — which was consecrated in 1981 by Cardinal Joseph Ratzinger (aka the late Pope Benedict XVI).

The German side has the oldest building up here — the rustic, tin-and-wood weather tower, erected by the Deutscher Wetterdienst (German weather service) in 1900. The first mountaineers' hut was built in 1897 but didn't last. The existing one — entwined with mighty cables that cinch it down — dates from 1914. In 1985, observers clocked 200-mph winds up here — those beefy cables were necessary.

Also on the German side is a golden cross that marks the highest point in the country. A priest and his friends hauled it up in 1851, but the historic original was shot up by Americans soldiers who used it for target practice in the late 1940s. What you see today is a modern replacement. And, on this side, the highest dining available is at a sleek, modern restaurant that comes with lofty views.

World War II left its mark on the summit as well. The Austrian side was higher until the Germans blew its top off during the war to make a flak tower that targeted Allied airplanes.

Both Germany and Austria use this rocky pinnacle for communication purposes. The square box on the Tirolean Terrace provides data for Innsbruck airport's air traffic control system. A tower nearby is for the Katastrophenfunk (civil defense network), dating back to the stressful years of the Cold War.

The Austrian station (which is much more visitor-friendly than the German one) has a fine little museum that tells the story of how the Zugspitze was first climbed in 1820. The museum also includes three interesting videos: a six-minute, 3D mountain show; a 30-minute, making-of-the-lift show; and a 45-minute look at nature, sport, and culture of the region. Looking down the valley from the Tirolean Terrace, you can see the Austrian towns of Erwald and Lermoos in the distance and the valley that leads to my favorite overnight stop in the region, Reutte.

In the summer, it's easy to actually "summit" the Zugspitze as there are steps and handholds all the way to the golden cross. Or you can just feed the birds from the lounge chairs of "the highest beer garden in Germany." The yellow-beak ravens — who get chummy with anyone who shares some pretzels — seem to enjoy the views here as much as the humans. While the Germans glory in the Zugspitze, their nation's highest point, their neighbors are less impressed. There are many higher mountains in Austria.

Rick Steves writes European guidebooks, hosts travel shows on public TV and radio, and organizes European tours. This column revisits some of Rick's favorite places over the past two decades. You can email Rick at rick@ricksteves.com and follow his blog on Facebook.