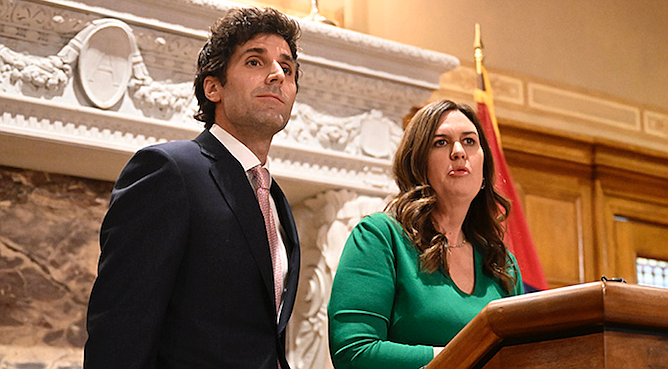 Governor Sarah Huckabee Sanders answers questions from reporters with her husband, Bryan Sanders, during a press conference announcing her husband as the head of a new council to promote outdoor recreation and tourism on Tuesday, Jan. 24, 2023. (Arkansas Democrat-Gazette/Stephen Swofford)

The governor signed an executive order establishing the Natural State Initiative and Natural State Advisory Council, where Bryan Sanders will serve as chair. Sarah Huckabee Sanders said the effort will be part of an emphasis in her administration on promoting the state's numerous highly attended parks, rivers and hunting grounds to boost tourism and public health.

The Republican governor said the advisory council will work to give the state "a better blueprint" for how to promote outdoor recreation. She has not yet appointed the other members who will make up the council.

The advisory council will work with the Department of Commerce, Department of Parks, Heritage and Tourism, Department of Finance and Administration and the governor's workforce development team to promote outdoor recreation, according to the order signed Tuesday.

Bryan Sanders' position on the Natural State Advisory Council will be unpaid.

"He brings a passion and energy to this space that is second to none," Sarah Huckabee Sanders said. "Nobody will be more devoted and more committed to making sure this is successful.

Sarah Huckabee Sanders said she will be the state's "chief salesperson," leaning into Arkansas' nickname of the Natural State to bring more tourists and make it a more attractive destination for people to work and live.

To underscore some of the state's under-promoted natural features, Bryan Sanders recalled a fly fishing trip he made to Montana where his guide revealed to him Arkansas -- not the Treasure State -- was the trout fishing destination anglers preferred.

"He paused and proceeded to lecture me that I could have saved a lot of time and money if I just stayed home," Bryan Sanders said.

Bryan Sanders is a political strategist from Kansas City, according to a biography on the governor's website.

The governor said her husband has a passion for the outdoors, often leading the family on outdoor excursions around the Natural State.

"Getting kids outdoors is so critical now -- off of screens, off of social media -- and outdoors is so important to their physical and mental health," he said.