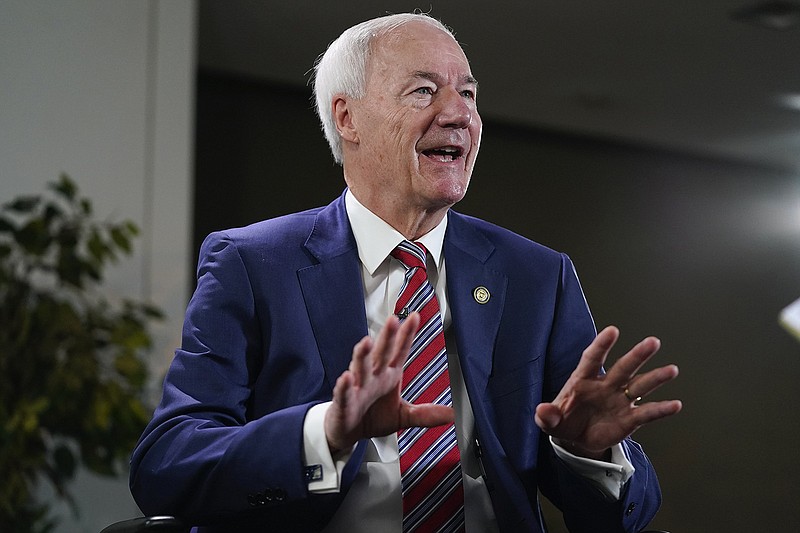 The Arkansas Senate on Tuesday voted to confirm 19 of former Gov. Asa Hutchison's appointees to state boards and commissions.

That meant the Senate rejected 31 of the former Republican governor's appointees to state boards and commissions, leaving the positions vacant for Republican Gov. Sarah Huckabee Sanders to make nominations to fill.

The five additional nominees confirmed on Tuesday include:

• Bryan Day of Little Rock to the Board of Visitors for the University of Arkansas-Pulaski Technical College. Sen. Clarke Tucker, D-Little Rock, said Day is a great man who would be excellent to serve in this post.

• Mary Erdman of Benton to the Arkansas Veterans Commission. Sen. Jane English, R-North Little Rock, said Erdman has been with the American Legion for 40 to 50 years, and "to not have her on the commission would be a shame."

• Lane Crider of Fayetteville to the state Board of Health. Sen. Bart Hester, R-Cave Springs, said Crider is a chief executive officer of the Beaver Water District.

• Shana Chaplin of Maumelle to the Arkansas Workforce Development Board. English asked the Senate to confirm the nomination of Chaplin to the board.

• Jeremy Criner of Siloam Springs to the Arkansas Fire Protection Services Board. Sen. Tyler Dees, R-Siloam Springs, asked the Senate to approve the nomination of Criner to the board, noting Criner is the Siloam Springs fire chief.

The Senate balked at confirming Leslie Branman of Little Rock to the state Board of Nursing.

Tucker told senators Branman is truly an expert in nursing who is needed on the nursing board.

The Senate voted 13 to 5 to confirm Branman, which fell five votes short of the 18 votes required in the 35-member Senate to confirm a nominee.

In a voice vote, the Senate declined to suspend its rules to clear the way for a vote on confirming former state Department of Commerce spokeswoman Alisha Curtis of Little Rock to the state Board of Health.

It requires 24 votes to suspend the rules in the Senate.

Tucker said Curtis was nominated to represent consumers on the state Board of Health, and she's excited to serve on the board and will do a good job.

The Senate's actions on these nominations Tuesday came after the senators huddled in the Senate's quiet room for more than 10 minutes.

"We didn't vote on anything," Hester said after the closed-door meeting. "We agreed on a process."

Over the past two decades, the Senate has rarely rejected a governor's nominees to state boards and commissions.

The Senate Rules Committee on Monday rejected Hutchinson's nomination of 36 appointees to state boards and commissions.

The rejected nominees include Hutchinson's nomination of his former chief of staff Alison Williams of North Little Rock to the Arkansas Educational Television Commission and the State Banking Board; Arkansas Public Employees Retirement System Executive Director Amy Fecher of Sherwood to the state Board of Nursing; and Curtis.

The Senate committee recommended that the full Senate vote to confirm 14 of Hutchinson's nominations of appointees to state boards and commissions. The recommended nominees include William Ingram Phillips of Fairfield Bay and Melonaie Gullick of Conway to the Arkansas Veterans Commission, Arkansas State University System Vice President of University Relations Shane Broadway of Bryant to the War Memorial Stadium Commission, and Magnolia banker Bruce Maloch to the Arkansas Livestock and Poultry Commission.

Senate Rules Committee Chairman Clint Penzo, R-Springdale, said Monday the Senate received these appointment letters from Hutchinson at the last minute shortly before Sanders was sworn in Jan. 10 as governor, and the Senate lacks information about many of these appointees.

A spokesman for Hutchinson, Bob Burgess, said Monday, "These appointments were made over several weeks to fill vacancies and, as is customary, they were grouped together into one announcement.

"As this was Governor Hutchinson's last round of appointments, the announcement was made at the end of his term in office, and I am not entirely sure how they were transmitted to the Senate," Burgess said.