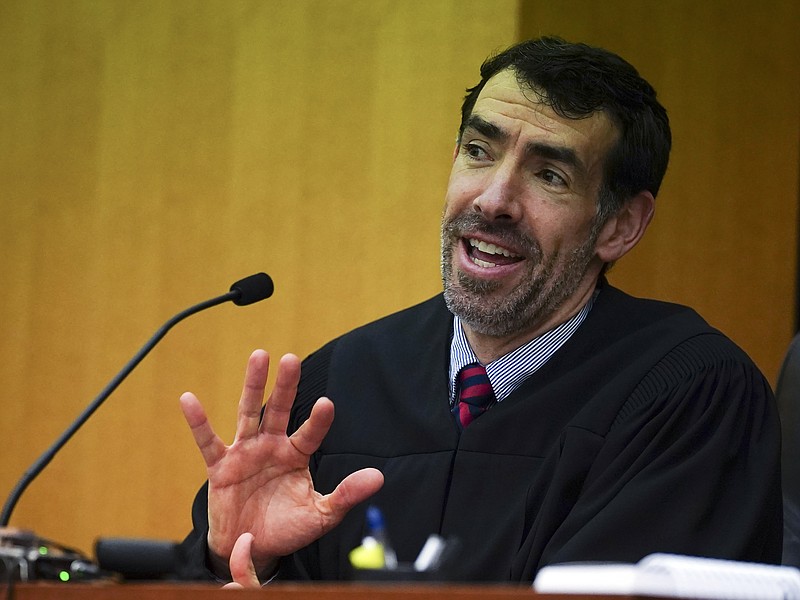 Fulton County Superior Court Judge Robert McBurney speaks during a hearing to decide if the final report by a special grand jury looking into possible interference in the 2020 presidential election can be released Tuesday, Jan. 24, 2023, in Atlanta. (AP Photo/John Bazemore)

ATLANTA -- A judge said Tuesday a final report produced by a special grand jury that investigated possible illegal interference in the 2020 presidential election in Georgia by then-President Donald Trump and his allies will remain under wraps for now.

Fulton County Superior Court Judge Robert McBurney said he was considering whether to release the report after hearing arguments from prosecutors and a coalition of media organizations, which pressed for its release.

He said he would further reflect on the parties' arguments and would reach out with any questions before making a final decision. He also said he anticipated his eventual decision would be appealed.

The report is expected to include recommendations from Fulton County District Attorney Fani Willis on possible criminal prosecution. If McBurney decides to disseminate the report, as the special grand jury urged, he must also determine whether any parts of it should be redacted.

Willis began investigating shortly after a recording of a January 2021 phone call between Trump and Raffensperger became public, in which the president suggested that Raffensberger, a fellow Republican, could "find" the votes needed to overturn his loss to Democrat Joe Biden.

Willis argued Tuesday that disclosing the report now could violate the rights of potential defendants.

Her office is not opposed to the eventual public release of the report, added prosecutor Donald Wakeford, but "it is opposed to it right now."

Trump's legal team in Georgia said in a statement Monday it would not participate in the hearing.

"To date, we have never been a part of this process," Drew Findling, Marissa Goldberg and Jennifer Little wrote. "Therefore, we can assume that the grand jury ... concluded there were no violations of the law by President Trump."

Trump defended his actions in several posts Tuesday on his Truth Social platform.

While the special grand jury's work took place in secret, as required by law, related public court filings provided a glimpse of investigative threads that were being pursued.

Those included phone calls by Trump and others to Georgia officials in the wake of the 2020 election, a group of 16 Georgia Republicans who signed a certificate in December 2020 stating that Trump had won the state and they were the state's "duly elected and qualified" electors and abrupt resignation of the U.S. attorney in Atlanta in January 2021.

Information for this article was contributed by Michelle L. Price of The Associated Press.