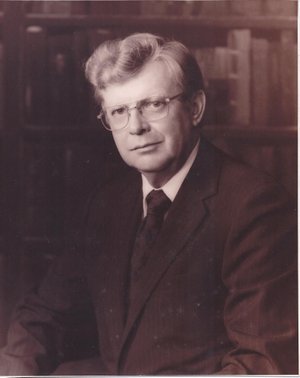 Dr. Barton Alfred Westerlund, formerly of North Little Rock, 89, passed away Jan. 22, 2011. He was born March 11, 1921, in Minneapolis to John Alfred Westerlund and Wendla Augusta Nygren, who emigrated from Sundsvall, Sweden. He died with his family at his side after a brief illness. He had lived at Woodland Heights, a retirement community in Little Rock, for the last nine years. He was the director of the Industrial Research and Extension Center at the University of Arkansas at Little Rock from 1962 to 1984, when he moved to Washington to assist in the writing of an international-trade bill for Rep. Beryl Anthony. He returned to UALR in 1985, becoming chairman of the marketing and advertising department. He was also a professor of economics and marketing there until his retirement in 1990. Dr. Westerlund earned his Ph.D. in Economics from the University of Arkansas in 1962. He earned a bachelor of business administration degree and a masters degree in economics, finance and government from the University of Miami in 1949. He served on the National Public Advisory Committee on Economic Development for the U.S. Department of Commerce for two decades. He was president of National Education Institute for Economic Development and received commendations from Presidents Richard Nixon and Bill Clinton, and congressional citations for his work in business development. He was a World War II veteran who served in China, Burma and India. The G.I. Bill paid for his education when he returned home.
His is survived by his wife, Dorothy Perkins Westerlund, and their three children, Douglas Westerlund and his wife, Frezil of South Dakota, Wendla Westerlund Akin and her husband, James of Tallahassee, Florida and Erik Alfred Westerlund and his wife, Debbi of Mayflower; four grandchildren, Graham Westerlund and his wife, Eri of Atlanta, Jessica Feldman and her husband, Jonathan of North Little Rock, Theodore Alfred Akin of Orlando, Florida and Felicia Westerlund of South Dakota; two great-granddaughters, Mia Westerlund and Amelia Feldman; and his niece, Karin Swedenborg and her husband, Rob of Hudson, Ohio. He was preceded in death by his parents, his sister, Ruth Peterson, his brother, Gunnar Alfred Westerlund, and his grandson, Ragin MacLane Westerlund.
Services will be held on Wednesday, January 26 at 11 a.m. at Faith Lutheran Church, Markham and Mississippi. Burial will be private at the Arkansas State Veterans Cemetery in North Little Rock. Arrangements by Little Rock Funeral Home, 8801 Knoedl Ct., Little Rock, (501) 224-2200. Dr. Westerlund's online guestbook may be signed at www.littlerockfuneralhome.com.