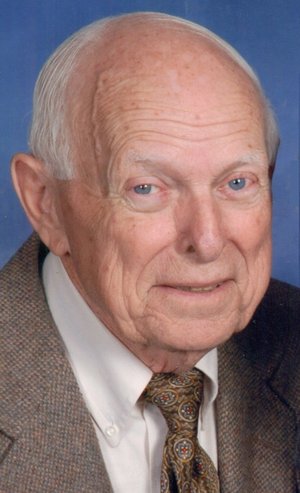 Robert Lafayette (Bob) Young Jr. of Little Rock, beloved husband, father, grandfather and great grandfather passed away August 11. He was born July 3, 1930 to the late R.L. and Mable Young of Lonoke.
He was preceded in death by a son, Jimmy Young, a brother, Julian Young and sisters, Bobbie C. Ellis and Saville Henry. Survivors are wife, Wanda Young, daughters, Glenda Merchant (Rusty) of Monticello, Donna Goss (Jim) of Little Rock, Diana Ragsdale (Randy) of Little Rock, sister, Shirley Fotioo of Little Rock, grandchildren, great-grandchildren and nieces and nephews.
Bob and his childhood sweetheart, Wanda were married for 62 years. Following graduation from the University of Arkansas, he served in the Army during the Korean conflict. Bob was the ultimate "people person" and a joyful Christian.
He was his happiest when surrounded by his wife, children and other family. He loved to serve people. In his younger years his family owned a grocery store in Lonoke. With his desire to take care of others, he continued his career in the grocery business enjoying what he loved most, to serve others. Another way he enjoyed serving people was to decorate his yard with seasonal displays for Easter, Christmas and other holidays. He was active in his Church and the local Kiwanis Club.
In lieu of flowers, the family asks that you consider donations to the American Cancer Society or Alzheimer's Arkansas. They would like to thank the caregivers and Arkansas Hospice that helped comfort him in his final days.
Funeral services will be held at 11 a.m. Saturday, August 16, 2014 at St. James United Methodist Church with Dr. Walter Smith officiating. Interment will follow in Lonoke Cemetery. Visitation will be held at the church from 10 a.m. until service time. To sign the online guestbook, go to www.griffinleggetthealeyroth.com.