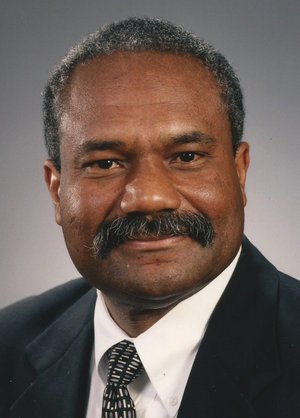 Pearlie Sylvester Reed, 67, of Marion, died Friday, April 8 in Methodist University Hospital; Visitation Thursday, April 14 from 6 to 8 p.m. in the Old St. Paul M. B. Church, West Memphis; Services Friday, April 15, 11 a.m. in Old St. Paul Church with visitation one hour prior to service; burial in Paradise Garden Cemetery with Anthony Funeral Home, West Memphis, in charge of service.
Pearlie Sylvester Reed was born June 14, 1948 in Heth, Arkansas, one of eighteen children, to Floyd L. and Gennora Reed. Under the guidance of his parents, he accepted Christ as his personal savior at an early age.
He received his education from Mildred Jackson High School in Hughes, Arkansas, graduated from University of Arkansas at Pine Bluff with a degree in Animal Husbandry and earned a Masters of Public Administration degree from American University in Washington, D.C.
Pearlie and his wife, Lesia Reed split their time between Marion, Arkansas and Baltimore, Maryland. He has two daughters, Cheryl Yvette Reed and Teresa Reed, both of Raleigh, N.C. He was preceded in death by their mother and his late wife, Deloris W. Reed. He also has two grandchildren, Sarah Denise Reed-Mughal and Jaden Kyle Sanders. He was also blessed with a great-grandchild, Yasmeena Sage Mughal.
Chief Pearlie S. Reed began his remarkable career with Natural Resources Conservation Service (NRCS), formerly the Soil Conservation Service, in 1968 as a student intern in Walnut Ridge, Arkansas. Through a wealth of experiences and job responsibilities, he eventually served and led NRCS as Chief from 1998 to 2002. He was nationally recognized for his dedication and commitment to working with farmers and ranchers and for supporting the mission of NRCS.
He served as State Conservationist for several states including Arkansas, Delaware, Maryland, and California as well as the U.S. Territories of Puerto Rico and Guam. He was responsible for leading comprehensive soil, water, and resource conservation and development programs in those states and U.S. Territories.
Pearlie served as Acting Assistant Secretary for Administration from 1997-98. A leader on Civil Rights issues, he was appointed to head the Civil Rights Action Team by then USDA Secretary Dan Glickman. The team issued a report that made recommendations on how to improve civil rights both inside and outside of USDA. President Bill Clinton issued an order that all 92 recommendations of the team be implemented.
Pearlie Reed was sworn in as the Assistant Secretary for Administration of the U.S. Department of Agriculture, appointed by President Barack Obama and confirmed by the U.S. Senate on May 21, 2009. He served as the senior official for Departmental Management until June 1, 2012. In this capacity he had responsibility for leading and managing Departmental Staff Offices, Departmental Administration and the Civil Rights offices of USDA. His departure in June of 2012 marked the second time Mr. Reed retired from the Department of Agriculture to return to work as a consultant in his own firm in Marion, Arkansas.
Over the course of his career, Pearlie has received numerous awards and honors. A few include: The Distinguished Presidential Rank Award for strength, integrity, industry and a relentless commitment to excellence in public service: The George Washington Carver Public Service Hall of Fame Award; The USDA Silver Plow Award, 1996 and 1998; 2012 Inductee in the Arkansas Black Hall of Fame; Excellence in Conservation Award.
He believed in public service and had a humble spirit. It gave him a lot joy and pleasure to serve others. He was a champion for the underdog and believed in fairness for all. He was a wise man, had a sharp wit and a great sense of humor. In his spare time he enjoyed watching baseball and basketball. His all time favorite movies included Superman, the Lion King and Secretariat.
He departed this life on April 8, 2016. He was preceded in death by his parents, Floyd L. Reed and Gennora Reed, his brothers Floyd L. Reed, Jr. and Dr. Eddie Reed. He is survived by his wife, Lesia Ann Reed and her son Robert Charles Terrell Jr.; his daughters Cheryl Yvette Reed of Raleigh, North Carolina, Teresa Reed of Raleigh, North Carolina; a granddaughter, Sarah (Salman) Reed-Mughal of Baltimore, Maryland; a grandson, Jaden Kyle Sanders of Raleigh, North Carolina; a great-granddaughter, Yasmeena Sage Mughal of Baltimore, Maryland; 13 brothers and sisters, Johnnie Mae Reed of Memphis, Tennessee, Forrestine (Eddie) Witherspoon of Columbia, South Carolina, Dorothy Edwards of Memphis, Tennessee, Dr. Hazell (Loistene) Reed of White Hall, Arkansas, Tommie Dale Reed of Memphis, Tennessee, Faye Reed of Helena, Arkansas, Janice (Michael) Reed Duvall of Dallas, Texas, Dr. Beatrice Reed of Little Rock, Arkansas, Elroy Reed of Chicago, Illinois, Mary (Tommy) Wilson of Albany, Georgia, Rachel C. Reed of West Bloomfield, Michigan, Gennora (Chauncey) Reed Willis of Sacramento, California and Elvon (Doug) Reed Collins of Little Rock, Arkansas; and a host of nieces, nephews, other relatives, and friends.