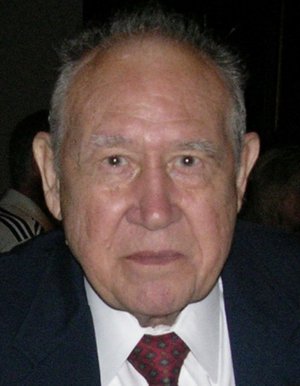 Jack Chaffin, 94, of Heber Springs, Ark. passed away early on the morning of July 10th, 2019. He was born in Knobel, Arkansas on May 2nd, 1925. He was the son of Clarence and Dennis Chaffin and was preceded in death by his sister Margaret Mooneyham. A beloved son, father, grandfather, and great grandfather. He was a graduate of Harding University.
He is survived by his beloved wife of 69 years, Edith, his only child Gary Lynn, his treasured daughter in-law Lisa Wishart and his treasured grandchildren Dacia, and her husband Karl Wiegandt, Taylor and his wife Rosa Maria and Trent. He also has three surviving great grandchildren, Austin, Mason, and Addison.
He served in WWII as a pilot in the United States Air Force. Most of his career was spent in Little Rock, Arkansas working for Bale Finance Company. He later retired to beautiful Eden Isle in Heber Springs, Arkansas, where he attended the Heber Springs Church of Christ for over thirty years. He was an avid fly fisherman for over twenty-five years after retiring. He was also a voracious reader and conversationalist. He will truly be missed by all. A Funeral service will be held Saturday, July 27th, 2019 at 2 p.m. at Olmstead Funeral Home, Heber Springs, Arkansas. www.olmstead.cc.