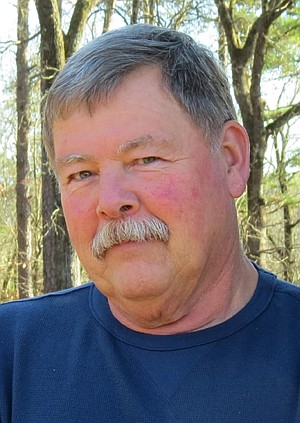 William Lloyd "Bill" Howard, 68, of Lonsdale (Crows Community), went to be with his heavenly father on August 3, 2020. He was born on August 13, 1951, in Sacramento, Calif., to Hurley and Virginia Howard. He is preceded in death by his parents,and brother, John Howard.
Bill is survived by his wife of 28 years, Kay Howard; daughters, Melissa Rigsby (Joe) and Mandy Shelnut (Cayce); his son, Seth Biehslich (Michaela); and grandchildren, Brock, William, Cole, Emersyn, Tristyn, and Brooklyn. He is also survived by his brother, Jim Howard (Dixie), and nieces, Holly and Jamie, of Sacramento, Calif.
Bill had a love for the outdoors and enjoyed doing anything that involved being outside. He retired from the Arkansas Forestry Commission in 2012 after 23 years of service. He was always an advocate for the Smokey Bear program and donned the costume to teach kids fire safety. From 2003 until his medical retirement, he also participated as a FEMA crewmember. One of his more notable jobs was as part of the Columbia space shuttle recovery team. He also worked many national wildfires around the country.
Bill loved his community at Crows. He owned and ran Crows Station for nearly a decade. He was instrumental in creating the program at Crows Fire Department. He was an avid conservationist for local resources within the community. He held membership at Gravel Hill Baptist Church, and more recently at Owensville Baptist Church.
Honorary pallbearers are Daryl Ray, Randy Ellison, Mike Godwin, and John Joiner. Bill's celebration of life will be at Ashby's Funeral Home Saturday, August 8, 2020 at 10 a.m., with visitation to follow. Please remember that a mask is required to enter. In lieu of flowers, the family requests that you plant a tree in Bill's memory. Please contact Angie Davis at the Arkansas Forestry Commission (501-332-2081) for a tree, or to send a monetary donation. Online guest book at www.ashbyfuneralhome.com.