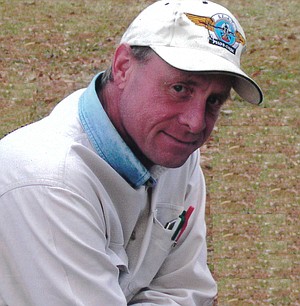 David Blake Haynes, age 62, of Arkadelphia, passed away Thursday, July 30, 2020, in Caliente, Nev., from injuries sustained in a fire-fighting airplane accident. He was born March 17, 1958, in Little Rock, Ark., to Billy Joe and Mary Jo Taylor Haynes of Monticello.
He graduated from Monticello High School and attended the University of Arkansas at Monticello. Blake, a well-acclaimed commercial pilot, amassed over 30,000 hours of flight time. He began his flying career when he earned his private pilot license under the instruction of his father. He continued flight lessons and got his commercial pilot license. He flew as a crop duster for KP Flying Services in Watson, Ark., and was featured on the front cover of Trade-A-Plane in February, 2001.
Blake flew for Kalitta Air in Detroit, Mich., and then returned and had his own agriculture flying service in Dumas, Ark.. He has flown with M&M Flight Service in Beaumont, Texas, for the past 25 years spraying timber and fighting forest fires throughout the United States.
He was predeceased by an infant sister, Terry Gayle; his paternal grandparents, Archie and Tannie Haynes; and his maternal grandparents, Johnny and Ludella Taylor. Along with his mother and father, Blake is also survived by his daughter, Amanda and her future husband, John Bowers of Saginaw, Texas; a grandson, Hudson Blake Bowers; a brother, Larry Haynes and wife,Polly, of Andover, Kan.; and three nephews, Joseph, Paul and Mark; great-aunt, Pauline Owen of Des Arc; aunt, Gloria and Sherman Moore of Little Rock; aunt, Wanda and Dan Lawdermilk of Stuttgart; uncle, Dennis Haynes and Kathy MacKay of Hazen; and cousins, Carol and Gil Plant, Sandy Haynes and Curtis, John, Tracy, Patti Sample.
Funeral services will be Friday, August 14, 2020, at 2 p.m. in the Stephenson-Dearman Chapel. Visitation will be from 1-2 p.m. before the service. Burial will follow in Oakland Cemetery. For more information or to sign the online guestbook visit www.stephensondearman.com