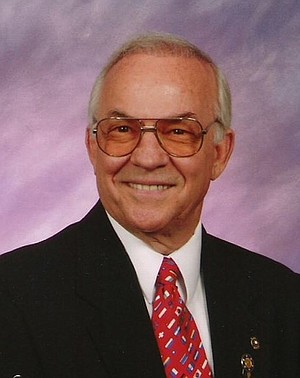 John Marvin Brodbeck, age 85, of Springdale, Ark., passed away on August 15, 2020, at Washington Regional Medical Center from heart failure.John was born on November 2, 1934, in Swanton, Ohio, to parents Oral and Ernest Brodbeck. He was raised in a three-bedroom farmhouse with his parents and six siblings. John learned at an early age the impact that giving could have on a person when he was gifted $1.00 every Christmas from his cousins. John graduated from Swanton High School in 1952 and quickly enrolled in barber school. Three years later he enlisted in the U.S. Army. John served his country for two years and upon discharge, enrolled in Bowling Green State University on a GI Bill. He was on the varsity wrestling team and a member of the Kappa Sigma fraternity. He graduated in under three years with a bachelor's degree in business. John met the love of his life, Marilee Kahle, during the summer of 1958 in his hometown of Swanton, Ohio. Three years later, on August 12, 1961, after they had each graduated from their respective colleges, John and Marilee were married. Following his college graduation, John took a job selling animal pharmaceuticals to Tyson and other large poultry companies in southern Missouri and Northwest Arkansas. In 1963 he was offered a job with a company based in Springfield, Mo., called Lipscomb Caribbean, Ltd., to be their General Manager on the island of Trinidad. John and Marilee had just welcomed their first daughter, Debra, and would welcome a second daughter shortly after arriving in Trinidad. John, Marilee, and their girls would spend the next 12 years living and enjoying life on the Caribbean islands of Trinidad and Tobago. In the mid-1960s, John obtained his pilot's license, and in 1968, he became a charter member of The Rotary Club of Saint Augustine, where he served as President. Joining Rotary would ultimately become one of the most pivotal moments in John's life. John and his family returned to the U.S. in 1974 and settled back into their hometown, where he became president of Marilee's family business, The Pilliod Company, a contract machining business. While in Swanton, Marilee obtained her Master's degree in Education and their daughters both became fourth generation graduates of Swanton High School. John continued in his love of service as President of the Swanton School Board, Sunday school teacher at Trinity United Methodist Church, mentor and honorary wrestling coach at Swanton High School, member of the Zoning and Planning Commission, and President of The Rotary Club of Swanton. He would later go on to serve as District Governor of Rotary District 6600 for two terms. In 1998 John sold the family business and retired to Holiday Island, Ark., with his wife. Retirement did not slow him down one bit. He served as Chairman of the Carroll County Republican Party and President of his homeowners' association, and he served two terms as President of The Rotary Club of Eureka Springs. Ultimately life would lead the Brodbecks to relocate to Springdale, Ark., to be nearer to their daughters and grandchildren. John immediately joined The Rotary Club of Springdale and started to take a very active role in the club and in Rotary District 6110, where he served on the Global Grants Committee and was honored at their Foundation Dinner in 2018. It is impossible to list all of John's personal and professional awards, accolades, and accomplishments. John's proudest and most loved memories involved his beautiful wife, two daughters, three grandchildren, and his Rotary family from around the world.
He is survived by his wife of 59 years, Marilee; his daughter, Debra Gilbert-Hardy, and grandchildren, Ian Gilbert and Adrian and Jillian Hardy, all of Springdale; his daughter, Jonna Brodbeck of Rogers; sister, Lucille Weiss of Charleston, S.C.; brother Ed (Elisa) Brodbeck of Baton Rouge, La.; sister, Joyce (Joe) Gallegos of Sarasota, Fla.; brother, Sonny (Mary) Myers of Delta, Ohio; sister, Carolyn Bundy of Toledo, Ohio; brother, Larry Myers of Nokomis, Fla., in addition to numerous nieces and nephews. John was preceded in death by his parents; and sons-in law, Greg Gilbert and Allen Hardy.
There will be a private memorial service at Heritage Funeral Home on Saturday, August 22, 2020, at 10 a.m. Services will be live streamed on Facebook for all of John's beloved family and friends around the globe to view. In lieu of flowers, memorial donations may be made in his honor to The Springdale Rotary Charitable Foundation Trust, P.O. Box 6006, Springdale, Ark. 72766. Funeral arrangements entrusted to Heritage Funeral Home. www.heritageofnwa.com