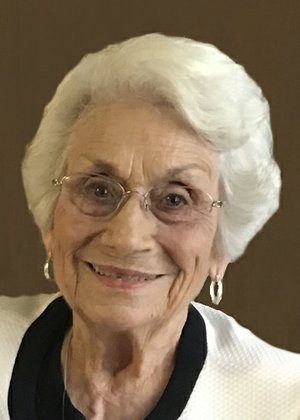 Martha Hilda Chivers Matthews, 92, of Conway went to be with her Savior on February 12, 2020. She was born July 22, 1927 in Conway to D.S. and Marybelle Lindsey Chivers and spent her whole life in Faulkner County. She was a lifelong member of Second Baptist Church of Conway where she served as church secretary and taught Sunday school and Training Union for years and rarely missed a service.

Martha graduated from Conway High School and attended Arkansas State Teacher's College (now UCA). She then began working at Farmer's Fire Insurance Company in Conway, a job she kept for over 50 years. Around this time she met the man who became the love of her life, Zane Sanders Matthews. They married in 1952 and never left each other's side until his death in early 2007.

They had one daughter, Zanette, who with her husband Dr. Keith Bell had three grandchildren who were "Mama Doot's" pride and joy: Dr. Matt Bell and his wife Sarah of Fayetteville, Dr. Lindsey Sward and her husband Erik of Conway, and Tyler Bell of Conway. She was also blessed later in life with four great-grandchildren: Zane, Hollin, and Cort Bell of Fayetteville and Samuel Sward of Conway. Martha was preceded in death by her older brother, Joe John Chivers. Martha's younger sister, Lynn Cummins, remained by her side throughout her life. As Zanette was an only child, her first cousins Craig Cummins (Dana), Kaye Kaye Cummins Dell (Greg), Susie Chivers Taylor (Ron), and Jo Ellen Chivers Stodola (Mark) were as close as siblings. Martha and Zane treated them as their own, as well as their children Kara Dell Hollinger, Jake Cummins, Josh Cummins, Morgan Cummins Hegi, Kami Taylor Coleman, Kyle Taylor, John Mark Stodola, and Robert Joseph Stodola.

Martha will be remembered by all that knew her as a true example of Christian love, kindness, and compassion. She loved unconditionally and was loved in return by all who knew her. As a lifelong resident of Conway, her knowledge of its historic neighborhoods was uncanny and her family always enjoyed quizzing her on the previous owners of old Conway houses. She was an avid teapot collector and at last count her collection numbered well over 500. One of her lesser known qualities were that she was extremely competitive, as her domino playing partners can well attest.

Though she will be missed, we know that she is in the company of her Savior and is reunited with her loving husband. Funeral Services will be 1:00PM Saturday, February 15, 2020 at Second Baptist Church in Conway with Tony Weston and Josh King officiating. Visitation will begin one hour prior at 12:00PM at the Church. Burial will follow at Crestlawn Memorial Park in Conway. The family would especially like to thank Martha's beloved caregivers that helped so much during the final years of her life and allowed her to stay in her own home where she loved to be.

In Lieu of flowers donations can be made to the Second Baptist Church in Conway. Online Guestbook available at www.rollerfuneralhomes.com/conway.