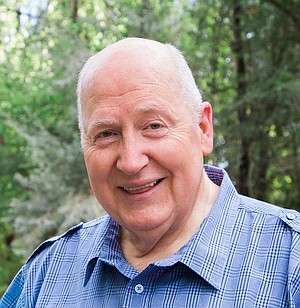 Boyd Louis "Jack" Frost, (79), returned suddenly and peacefully to his heavenly home on June 6. He was born March 13, 1941 in Malvern to Howard Hugo Frost and Mary Louise (McDowell) Frost. He graduated from Benton High School in 1959. When he was just 16 years old, his father passed away from injuries sustained in World War II. Boyd completed his own military service in 1963 after the completion of a tour of duty in South Korea. Although he started college at the U of A, but put his education on hold and served in the Peace Corps from 1964 to 1966 in Honduras. In 1969 he received a Bachelor of Arts in Anthropology with a minor in Accounting from BYU.

He married Sharalee Railsback in 1968 and had six children: Todd (Cheri Visser), Stacie (Andrew Wooley), Mindi (Christian Petrie), Ginger (Robert McCool), Michael (Mindi Hancey), and Jacquelyn. Together, they have 12 grandchildren with one great-grandchild on the way. Jack was preceded in death by his father, mother, and older brother, James. He is survived by his wife, children and grandchildren, as well as his siblings: Richard, Barbara, and his twin sister, Betty – all of Springdale, Ark., and sister-in-law, Joanne Frost (his brother's widow) of Little Rock.