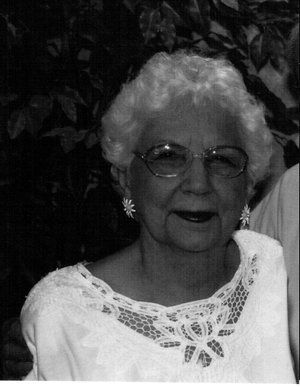 Ruth (Adams) Alford Sherman, age 92, passed away on March 13, 2020 at Circle of Life Hospice in Springdale. She was born February 1928 in San Antonio, Texas to the late Herbert and Milla (Noster) Adams, and grew up in New Braunfels, Texas.
Following her graduation from New Braunfels high school, Ruth attended Steven's College in Columbia, Missouri where she met Robert Alford. They were married over 50 years and had two sons, Terry and David. While raising her children, Ruth earned a B.A. in English at Lamar University in Beaumont, Texas, and taught English in Middle School for 10 years.
After Ruth and Robert moved to San Antonio, she worked as a social worker with the State of Texas Department of Human Services. Ruth received a commendation as a member of the State Disaster Team after Hurricane Carla and later was awarded another commendation for performing CPR on a young drowning victim at a childcare center.
Throughout much of her life, Ruth supported education scholarships and several charitable organizations. Ruth painted in the medium of watercolor and oil, and received an Artist of the Month Award. After Robert's death in 2003, Ruth moved to Butterfield Trail Village in Fayetteville. She subsequently met and married retired Air Force Colonel Fred Sherman, and following his death married Dr. Richard Forsythe.
She is survived by her two sons, David Alford of Green Valley, Arizona and Terry Alford of Gainesville, Florida; and extended family Madeline M. Motta and her son, Gabriel of Stowe, Vermont.
The family would like to thank Ruth's companions, Fara Ferguson and Janie Burks for their emotional support over the years.
Donations on Ruth's behalf may be made to your local animal shelter, the Girl Scouts of America or the Butterfield Trail Village Foundation. Arrangements are under the care of Rollins Funeral Home. Online condolences may be shared at, www.rollinsfuneral.com.