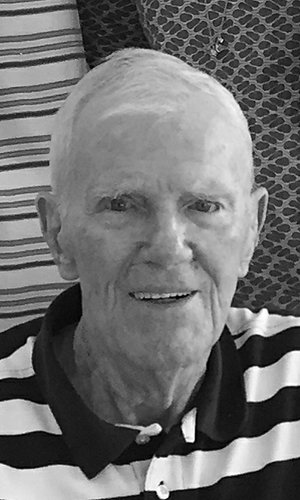 Wayne William Carlson, 92, of Rogers, Ark., passed away on Monday, March 23, 2020. Born on March 21, 1928 in Rockford, Ill., to Swedish-American parents, Frank W. Carlson and Ruth Peterson Carlson. Wayne spent his childhood working as a paperboy, learning the saxophone, and playing baseball. Wayne, a talented shortstop, signed with the Chicago Cubs' minor league baseball team at age 16 and later the Cincinnati Reds minor league team. After finishing high school, Wayne served a tour of duty with the U.S. Army in occupied Japan and earned his college degree from Pittsburg State University in 1951.

Wayne's life-long love for his wife, Margy Hendricks Carlson, began in childhood when Wayne, thirteen, asked Margy, eleven, to go to the movies with him. What started as a friendship, grew into 70 years of happy marriage together.

Wayne lived a very active lifestyle, participating in many different hobbies over the years. Wayne played shortstop for the semi-pro baseball team, the Bentonville Merchants, coached Little League and Babe Ruth baseball in Bentonville, and was an avid bowler, holding the high-series average in Rogers for a number of years. Wayne sang in a quartet called the "Heartburns," enjoyed dancing with Margy, and treasured vacationing with his family and friends around the world. Of all his hobbies, Wayne loved golf the most, spending many summer days on the course at Pinnacle Golf Club in Rogers and each winter in Palm Desert, Califa. Wayne won numerous senior championships, golfing well into his eighties.

Wayne (PaPa) loved visits from his grandchildren and great-grandchildren. At the conclusion of each visit, with a twinkle in his eye, Wayne always responded to each "I love you" with "Love you more!"

From all of us, we love you more.

Wayne was preceded in death by his parents and his sister, Phyllis Carlson (Bernie) Lundberg.

Services will be announced at a later date. Wayne will be laid to rest at Pinnacle Memorial Gardens in Rogers.

Arrangements have been entrusted to Stockdale-Moody Funeral Services of Rogers. To read the full obituary, visit Stockdale-Moodyfs.com. To share memories, pictures, or words of comfort with the family, or to request notification of services or information on donating to the Bentonville Parks and Recreation department in Wayne's memory, email w.w.carlson92@gmail.com.