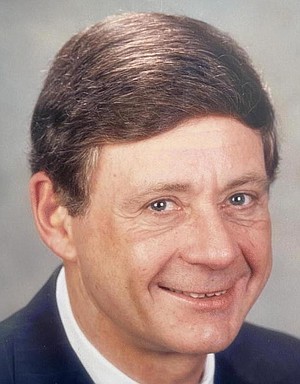 Conway Taylor Rucks, Jr., died peacefully on November 6, 2020. Conway was born on December 29, 1944, in Magnolia, Ark., to Conway Taylor, Sr. and Una Satchfield Rucks. He grew up in Haynesville, La., and graduated from Haynesville High School in 1962. He received a BSBA at Louisiana Tech University in 1966, an MBA from the University of Arkansas at Fayetteville in 1968, and a Doctorate of Business Administration from Louisiana Tech University in 1974. He married Karen Kinard, also of Haynesville, in 1968.

His career as an educator began in 1968, at Southern Arkansas University in Magnolia, Ark., where he taught for two years before accepting a position as a marketing instructor at Stephen F. Austin University in Nacogdoches, Texas. In 1975, Dr. Rucks began a career as a professor of Marketing Research and Consumer Behavior at the University of Arkansas at Little Rock, where he would work until his retirement in 2014. While at UALR, he served as Marketing and Advertising Department chair for several years. He also served on many committees and councils including the College of Business Council, Strategic Planning Committee, the Academic Integrity Committee and the Faculty Senate. In 1983, Dr. Rucks started an independent marketing research company where he developed marketing information systems for firms in the travel and entertainment industry including Anheuser-Busch Corporation, the ten Busch Gardens/Sea World theme parks, ten major league baseball teams, Jacuzzi, Inc., and Entergy Corporation.

In connection with his marketing research firm, Dr. Rucks served the community by conducting public service projects with the Arkansas State Fair, and he conducted data analysis to identify loyal market segments for Entergy Corporation. He authored numerous research articles and scholarly publications, but he was particularly proud when a humorous article he wrote was published in one of his favorite periodicals, National Review Magazine. While at the University of Arkansas at Little Rock, Dr. Rucks received the 1998 College Faculty Excellence Award for Teaching, the 1999 College Faculty Excellence Award for Service and the 2002 Outstanding MBA Faculty Award. He retired after 39 years of serving the students of UALR, and Dr. and Mrs. Rucks moved to Dallas to be closer to their daughters and grandchildren.

Conway was affectionately known as "Butch" to friends and family. He will be remembered for his irrepressible and often irreverent sense of humor and his passion for watching sports, especially when his beloved Arkansas Razorbacks, St. Louis Cardinals or Dallas Cowboys were playing. He loved coaching his daughters in softball and basketball. Butch was an enthusiastic storyteller and was always willing to engage in lively conversation about almost any topic, particularly politics. He always had a funny story or a helpful hint about the wide array of things that interested him, from techniques for maintaining a beautiful yard, to classic cars and revolutionary war history, to the unique personality characteristics of his favorite breed of dog, the dachshund.

He is survived by his wife of 51 years, Karen Kinard Rucks of Dallas, Texas, his daughter, Susan Barrett and husband Michael of Dallas, daughter, Taylor Wells and husband Alex and grandchildren, Virginia and Robert Wells, all of Dallas. He is also survived by his sisters, Jo Ann Rucks Day and husband Terry of Texarkana, Texas and Lori Rucks Cole, of Texarkana, Texas. In lieu of flowers, donations can be made to the College of Business Marketing Department Scholarship Fund at University of Arkansas at Little Rock, at 2801 S. University, Little Rock, Ark., 72204.