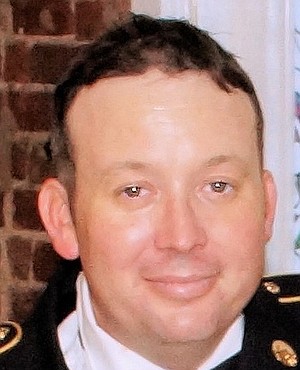 Timothy "Scott" Briggs, 41, of North Little Rock, passed away on November 20, 2020. Scott was born in Berlin, Germany, to Bobby and Ruby Briggs on July 18, 1979. A lifelong Christian, Scott often found comfort in prayer. He was a graduate of Little Rock Central High, and Columbia Southern University with an Associates in Criminal Justice. Scott joined the US Army as a combat tanker, who deployed to Iraq during OFI II. He was a veteran of Iraq Freedom and served in the Army and was awarded the Army Commendation Medal and the Purple Heart, among others. After retiring from the Army, Scott spent his time watching sports, especially the Arkansas Razorbacks and the Dallas Cowboys, and was happiest when he was surrounded by his family.
Scott is preceded in death by his grandparents, Louis and Helen Stracener and Dallas Briggs. Scott is survived by his wife, Kimberly Douglas Briggs, his two daughters, Ava Briggs of Little Rock, and Ruby Briggs of Bartlett, Tenn., his brother, Aaron Briggs, his parents, Bobby and Ruby Briggs of Conway; and grandmother, Betty Perryman, of Springdale.
Visitation will begin at 1 p.m., followed by the funeral service at 2 p.m., Friday, November 27, 2020, at Smith-North Little Rock Funeral Home. Burial will be at Mulberry Cemetery, England, Ark. In lieu of flowers, the family asks that memorials may be given to the Disabled American Veterans. Covid directives: Masks and social distancing required at all times. Guestbook at www.SmithFamilyCares.com