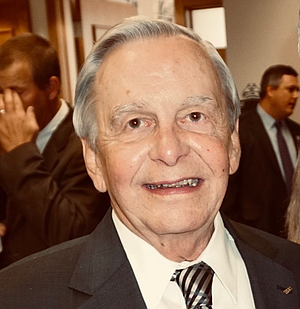 Larry Randall Clark was born November 20, 1942, in Fayetteville, Ark., to Roland R. Clark and Bonnie Clark Bradley, and passed away on Sunday, September 13, 2020, at his home in Fort Smith after an extended illness. He grew up in Eureka Springs, Ark., the son of the owner of Clark's Market, the only grocery store in town. He developed his life-long work ethic at an early age, as he was put to work before he was as tall as the store shopping carts.

He was president and salutatorian of his high school senior class and attended Arkansas Boys State. In 1962 he married Sandra Weems, and after graduating from the University of Arkansas in 1964, he took a position with the Fayetteville Chamber of Commerce. In 1965 he accepted a job as assistant manager of the Fort Smith Chamber of Commerce where he helped recruit many of Fort Smith's largest employers. In 1972 he went into the insurance business with his good friend Sam Hiller, the beginning of an over 30-plus year partnership. Together, they created Brown-Hiller-Clark & Associates, one of the largest insurance agencies in Arkansas, which is now known as BHC Insurance.

Larry was one who strongly believed in the value and importance of community service, believing that it helped build a better, stronger and a more caring city in which to live and raise a family. Some of his leadership positions include past chairman Fort Smith Chamber of Commerce; former Chairman and Board of Trustees for 18 years for the University of Arkansas-Fort Smith (Westark Community College); former Chairman of the Board of Trustees for 30 years of the Arkansas-Oklahoma State Fair; former Fort Smith City Board of Directors; president Arkansas State Chamber of Commerce Executives; past president of the Professional Insurance Agents of Arkansas; and former Board of Trustees member of First United Methodist Church.

In 2016 he received the Arkansas insurance industries' highest award as an inductee in the 2nd ever class of the Arkansas Insurance Hall of Fame. He was well regarded for his mentorship of insurance professionals and made lifetime contributions to the industry at a local, state, and national level. He served as a business role model for his sons, Scott and Marty, who joined him at BHC in the 1990's.

One of Larry's favorite volunteer activities was his 30-plus year involvement on the entertainment committee of the Arkansas-Oklahoma State Fair and the camaraderie shared with his fellow committee members. In his role he was responsible for booking top music talent for the Fair for decades, including Garth Brooks, George Strait (6 times), Alabama (6 times), Toby Keith, Brooks & Dunn, Barbara Mandrell, Alan Jackson, and just about every other rising country music star for a generation.

In later years he enjoyed spending time at Mountain Harbor on Lake Ouachita where he was able to rest and relax. Being on the water and seeing the majestic scenery all around, he declared it one of God's best creations. He was a person of faith who loved his family, his BHC work family, and his friends and took special delight in his grandchildren, watching them grow and becoming the person they were meant to be.

He was preceded in death by his mother and father, as well as his step-father, Wayne Bradley. He is survived by his wife of 58 years, Sandra Clark of the home; his son, Scott Clark (Deborah) of Fort Smith; his son Marty Clark (Gina) of Fort Smith; his sister Sheila Bunch (Terry) of Eureka Springs, AR; as well as four grandchildren, Ashton, Braden, Paxton and Hudson Clark.

A public viewing will be held on Thursday, September 17, at Edwards Funeral Home at 201 N. 12th Street in Fort Smith from noon to 7 p.m., and on Friday, September 18 from 8 a.m. to noon. A graveside funeral service for family and friends will be held at Roselawn Cemetery 5403 North O Street in Fort Smith at 2 p.m., on Friday, September 18. In lieu of flowers, memorial contributions can be made to the Fort Smith Boys Shelter at 5904 Zero Street; Fort Smith, Ark., 72903 or First United Methodist Church at 200 North 15th Street; Fort Smith, Ark., 72901. Online condolences may be sent to: www.edwardsfuneralhome.com