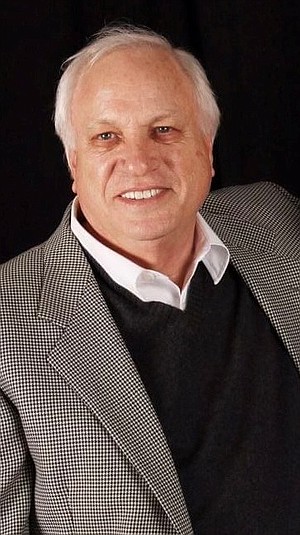 CHARLES SIDNEY GIBSON, OCTOBER 29, 1943-DECEMBER 15, 2021.
He was known as an outstanding lawyer and storyteller, but his family knew him as fun loving and generous. Charles Sidney Gibson, age 78, passed away December 15, 2021, at the Chicot Memorial Medical Center in Lake Village, Ark., after a long battle with Parkinson's. Charles Sidney, known as Sid and Sidney to some, was a proud native of Dermott, Ark., where he was the second born son to the late Ruby Juanita Watkins Gibson, formerly of Hamburg, Ark., and the late Sen. John F. "Mutt" Gibson.

Charles Sidney was the mischievous of the Gibson boys. There were just two of them, and older brother John Frank Gibson Jr. was the more studious. [As kids, Charles Sidney and best friend Lester Pinkus put a mannequin replete with ketchup as blood and in clothing in the street as though it'd been hit by a car. The town marshall didn't think it was funny.] Both Charles Sidney and John Frank loved the outdoors; both loved their hometown, and both had an affinity for advocacy and law at a young age from being raised by one of the state's most prolific orators, their father, Mutt Gibson.
Charles Sidney graduated from Dermott High School in 1961 with peers who have remained lifelong friends and confidants. Charles Sidney went to the University of Arkansas where he majored in fun, and his bid to Sigma Chi fraternity never fulfilled its initiation obligation (thus the fun part). So he moved back to southeast Arkansas where he would enter the University of Arkansas at Monticello (then Arkansas A & M College), and it was there he met the love of his life. He and Sherry Jones had a whirlwind romance and were married within three and a half months of their short courtship and remained married for 56 years until her untimely death in 2019. After their marriage, Charles Sidney received his degree in economics and then went to law school in Little Rock then Fayetteville. They had two children and adopted a third. Their firstborn, Charles Sidney Gibson II, known as Chuck, joined the family legacy as a lawyer (there are many Gibson lawyers in this family tree) where both practiced together at Gibson Law Office since 1990, stomping courtrooms around the state. When driving to court with Chuck at the wheel, Charles Sidney would say that it always gave him a Johnny Cash rhythm in his head. Charles Sidney had to retire in 2019, and now Chuck carries on the firm started by Mutt Gibson.

Charles Sidney had to do what no other parent ever plans to do, and that is bury a child. Second son, Dan Gibson, age 45 at the time in 2013, lost his life in a house fire at the very home where Charles Sidney and John Frank were raised in Dermott. Charles Sidney and Sherry tried to put on face and move next door to another home, but their hearts never overcame the grief.
The Gibsons had opened their home in 1975 to Sherry's first cousin, Lisa Kaplan, after Lisa's mother died suddenly. Lisa was just 12 and needed a place to stay as she was the only child of a single mother, so cousin Sherry brought her from New Orleans, La., to Dermott to remain. Besides the culture shock, the transition was formidable, but the Gibsons did all they could to welcome her. They rearranged space in their newly built home to accommodate a pre-teen girl. They finally adopted her in 1976, when she was 13, and they legally changed her name to Lisa K. Gibson. In short time, it was as though Lisa was there from the beginning. Four became Five. Chuck and Lisa were the same age and class, with Dan being five years younger.
Charles Sidney loved doing things with his kids. There were ski trips to Aspen, Colo., hunting trips on family land in southeast Arkansas, and Razorback game attendances in Little Rock. We all have that one good memory of a War Memorial Stadium game, but does yours involve an arrest? During a boisterous rout by the #2 Texas Longhorns in 1983, Charles Sidney and John Frank's box seats were close to the opposing team's band, and they had had enough of that Texas cannon firing every time the Longhorns scored. So he did what any red-blooded Razorback fan would do: he threw his tennis ball can of gin and tonic at the offenders. Somehow there was a mix up, and his brother John Frank got the rap for that. People still remember the nicely dressed men being escorted out of War Memorial Stadium in 1983. Some say expletives were used.
Charles Sidney loved having grandchildren. Son Chuck and then wife Gina brought home the first grandchild, Kristen, and they lived next door to each other. Their family added a son, Charles Sidney Gibson III, and a set of twins Madeline and Courtney Gibson. Daughter Lisa and husband Kris had Sidney, Gibson, and Anna Margaret Fischer, obviously the first two being named for Sid Gibson. Charles Sidney was the best babysitter for the grands-always willing and never stressed. He didn't freak over fevers and cuts but tended them, and everything was better.
Charles Sidney loved music, yet never graduated above Elvis, being firmly stuck in the 50s. Drive a car after he'd been in it, and the radio would blast you with "Houndog." A relative tried to force Steely Dan on him once, and it didn't end well.
He might have had health setbacks these past few years, but he still managed to practice law and pepper Chuck with advice on every case. As someone who loved people, Charles Sidney continued to host his hearty roundtable discussions with his closest friends at his home. He tried to replicate his coffee shop discussions he had in Dermott and other towns for many years.
Charles Sidney was predeceased by Sherry Jones Gibson in 2019; son, Daniel Darron Gibson in 2013; and his parents. He leaves to cherish the memories of his storytelling with son, Chuck Gibson (Jana Foley) of Dermott and Little Rock; daughter, Lisa Gibson Fischer (Kris); grandchildren, Kristen Gibson of Little Rock (Matt Clevenger); Charles Gibson of Little Rock; Madeline Gibson of Atlanta, Ga. (Michael P. Langa); and Courtney Gibson Endsley (Blake) of Benton, Ark., along with Sidney Fischer Head (John) of Little Rock; Gibson Fischer of Dallas, Texas; Anna Margaret Fischer of Little Rock; and great-granddaughters, Kameron Kay Head of Little Rock and Adrian Ann Head of Little Rock.
Parkinson's took him down in the last few years. Notable caretakers include Cedric Johnson of Dermott and cousin Don "Rip" Naron and his wife, RoseAnn of Dermott. There are others, but these three were there on a daily basis.
Because of the holidays, a memorial will be planned for early 2022. Griffin-Culpepper Funeral Service in McGehee is handling arrangements.