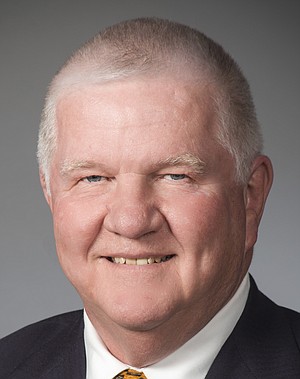 Richard L. (Dick) Cisne, passed away, February 7, 2021. He was born April 26, 1950, to William B and Doris L. Parker Cisne in Conway, Ark. Dick graduated from Conway High School in 1968 and from the University of Arkansas at Fayetteville in 1972 with a BSBA degree in accounting.
He joined the Arkansas practice of Russell Brown & Company in 1972 which later merged with Arthur Young & Company in 1982. He was a tax partner in the Little Rock office until September 1987, when he left along with Johnny Hudson and Roxy Keeling-Culp to establish their own firm, Hudson, Cisne Keeling Culp & Co LLP, which has grown to be the 5th largest CPA firm in Arkansas and employs about 40 professionals. While with Arthur Young & Company, Dick served as their National Cooperative Industry Coordinator and became very active in the National Council of Farmer Cooperatives and its LTA Subcommittee. He served many years as chairman of the National Society of Accountants for Cooperatives' Tax Committee and has made several presentations at NSAC national meetings. Dick is a past president of the Mississippi Valley Chapter of NSAC and for the past several years has served as Chairman of the NCFCs LTA Subcommittee on Financial Reporting of Agricultural Cooperatives. He was a member of the American Institute of Certified Public Accountants and the Arkansas Society of Certified Public Accountants.
In addition, Dick was a Rotarian with the Downtown Rotary Club where he received the Paul Harris Fellow Award. Dick spent many years serving as a board member and treasurer of the Little Rock Boys and Girls Club Foundation as well as a director of the Central Arkansas Boys and Girls Club. He was also on the board of Bank of the Ozarks and one of the founding directors of the Arkansas State Police Foundation where he also served as President during the early years of operation.
Dick is survived by his sons, Jay Gentry and Derek Cisne; his life partner, Barbara Hays; brother, William Cisne and wife Glenda; sister, Janice Kendall; his three grandchildren, Madeline Gentry, Logan Cisne, and Gavin Gentry and two daughter-in-law's, Courtney Cisne and Dr. Rhonda Gentry. He is preceded in death by his wife, Cheryl and his parents, William and Doris Cisne, and brother Sam Miller.
Graveside service will 1 p.m., Saturday, February 13, 2021, at Forest Hills Memorial Park. Visitation will be 3-7 p.m., Friday, February 12, 2021, at Roller-Chenal Funeral Home. In lieu of flowers, please donate to the Arkansas State Police Foundation, 5702 Dreher Lane, Little Rock, Ark., 72209, or Little Rock Boys and Girls Club Foundation, 425 West Capital #480, Little Rock, Ark., 72201.
We are complying with the Arkansas Department of Health guidelines and limiting indoor funeral and visitation attendance to 50 people at one time. All attendees must provide and wear their own masks before entering. The family will have a celebration of life party for Dick at a later date. Please sign online guestbook at: www.rollerfuneralhomes.com/chenal.