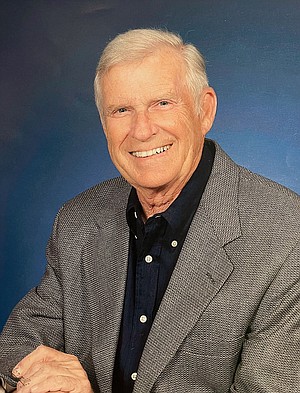 Hiram Whittington Cooper, 89, was born in Hot Springs on February 21, 1931, to Lewis Downey and Eugenia Towell Cooper. He passed peacefully on February 13, 2021.
Hiram is survived by his wife, Susan Bradshaw Cooper; his son, Keith W. Cooper and wife Tami of Little Rock; his daughter, Candice C. Smith and husband Glenn of Maumelle; four grandchildren: Grayson and Peyton Smith, and Whit and Hattie Cooper. Hiram was preceded in death by his twin brother and best friend, Thomas Cooper, of Hot Springs.
Hiram was a graduate of Hot Springs High School and the University of Arkansas, College of Engineering - Class of 1953, a member of Sigma Alpha Epsilon Fraternity, and Theta Tau Engineering Fraternity. Commissioned as a Lieutenant in the Air Force ROTC, he was called to active duty and served two years in Korea following graduation.
After a brief time with Ark-La Gas in Shreveport, Hiram was employed by the Aluminum Company of America in Bauxite, Ark., as a Junior Chemical Engineer remaining with Alcoa until his retirement in 1994. During his tenure, he and his family had assignments in Bauxite, Ark.; The Hague, Holland as Director or Alcoa Nederland BV in Rotterdam; Project Manager and President of Moralco KK in Iwakuni, Japan; Alumina Plant Superintendent in Point Comfort, Texas; Marketing Manager for Alumina and Chemicals, Pittsburgh, Penn.; and Point Comfort Operations Manager in Texas.
Hiram had a unique influence on everyone who worked with him and all who knew him. The Coopers returned to their "Golden Pond" on Lake Hamilton, where Hiram retired as Alcoa's Arkansas Operations Manager. He cherished travel and spending time with his family, grandchildren and life-long friends.
Hiram was an active member of the First Presbyterian Church of Hot Springs, where he served three terms as an Elder. We will honor Hiram at Greenwood Cemetery, gathering for a graveside service, at a date to be determined later.
Honorary Pallbearers - Scott Allen Cooper, Russell Brandt Cooper DDS, John Wolf, George Ryan, Jaime Fernandez, Mark Shelton & Billy Murphy.
Memories and condolences may be shared at www.GrossFuneralHome.com