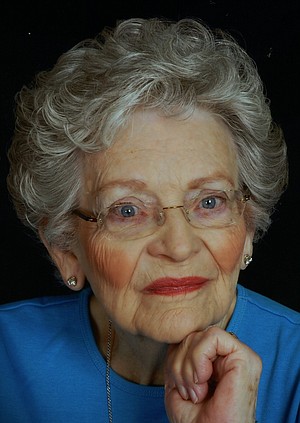 Sunday, August 29, 2021, Heaven gained a precious soul, Muriel Jeannine "Sissy" Brittain Henderson, from her home surrounded by her family. Sissy was born June 8, 1932, in England, Arkansas, to William Sidney and Mollie Louise Whitlock Brittain. Sissy graduated from England High School in 1949 and attended Arkansas State Teacher's College (UCA) where she was a member of Alpha Sigma Tau Sorority. She decided to come home and marry the love of her life, Clint Elliott Henderson on April 8, 1951. They moved to Bradley, Arkansas, for Clint to farm, but soon moved back to England. Together they enjoyed traveling with friends, Razorback games, but most of all they loved to be with their children and grandchildren.
Sissy was a faithful lifetime member of First Baptist Church England. She raised her children in the church because that was the most important thing to have her children to know Jesus. When her children were young, she taught children's Sunday School and Vacation Bible School until they were grown. At that point, she began to teach an adult women's Sunday School class. She taught until she was not able to attend due to her health. Sissy's favorite part of church was the music and especially the choir. She was a member of the choir from the time she was a young girl until there were no more choirs. She enjoyed singing in the special music programs and singing solos.
Sissy was preceded in death by her parents, husband, son, Joel Brittain Henderson, and her siblings, Dorothy Brittain Tanner, Reeves Bernard Whitlock "Sonny" Brittain, and William Patrick Brittain. She leaves a great legacy in her children, Clint (Connie) Henderson, Jr., Hollie Henderson, Pam (Jim) McFall, and John (Missy) Henderson, and daughter-in-law, Beverly Henderson. She is also leaving her legacy of life to her grandchildren and great-grandchildren, Ryan Henderson, Erin Pearson, Rachel (Barry) Jackson, Brittainy (Mark) Williamson, Jay (Natalie) McFall, Caty Henderson, Hanah Henderson, John William Henderson, Jr., Haley Henderson, Clint Henderson III, Niles Childress, Tyler McCormick, Peyton Pearson, Marah Williamson, Greer Jackson, Connor Jackson, Turner Henderson, and Elliott McFall. There are also four other Earth Angels that survive her, Jamie McGraw, Linda Frye, Karen Henry, and Leslie Triplett better known as the "Woo Hoo" girls. Without them, her last nine months would not have been filled with so much love and care.
Funeral will be 2 p.m., Thursday, September 2, at First Baptist Church, England, with Rev. Rick Hyde and Bro. Toby Havens officiating. Burial will follow at Mulberry Cemetery. Visitation will be at 1 p.m., at the church. Memorials can be made to First Baptist Church, 201 Haywood St., England, Ark., 72046, or to Arkansas Children's Hospital, 1 Children's Way, Little Rock, Ark., 72202. Online guestbook: www.rollerfuneralhomes.com/england