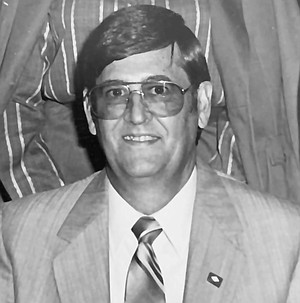 Billy Dean Porter, 89, of Clarksville, Ark., passed away Monday, June 20, 2022, at his home in Clarksville. He was born June 22, 1932, in Harmony to Mr. James Loyce and Ola (Miracle) Porter. Bill was a member of the Clarksville First United Methodist Church and was a former member of the Harmony Presbyterian Church. He is preceded in death by his wife of 60 years, Anna Lou (Pierson), his parents, and bothers, Lyall, Buell, and Gus Porter, and sister, Trixie Buchannan. Mr. Porter is survived by one daughter, Charlotte and Bruce Wilson of Clarksville, and three sons, David and Sheila Porter of Little Rock, Jimmy and Lisa Porter of Russellville, and Robert and Elaine Porter of Fayetteville; six grandchildren, Allison (Wilson) and Jason Hart, Joshua and Erin Wilson, Eli and Lorna (Porter) Pierce, William Porter, Joseph Porter, and Matthew Porter; six great-grandchildren, Aurora Hart, Jonathan Hart, Penelope Wilson, Emerson Wilson, Porter Grace Pierce, and Lawson Pierce; along with numerous nieces and nephews.
Bill Porter is a descendent of a Porter Family that has resided in and around Harmony, Arkansas, since 1838. He graduated from Clarksville High School in 1950 and the College of the Ozarks, now University of the Ozarks, with a degree in Business Administration in 1954. On March 19, 1955, at the Harmony Presbyterian Church he married Anna Lou Pierson, a descendent of the Laster Family that also resided in and around Harmony since the late 1830s. They began their marriage in Harmony and moved to Clarksville in 1968 to a home where he resided until his death. Bill began his business career working part-time while in college at Galloway Lumber Company and joined the company full time upon graduation, as office manager and bookkeeper. After the owner of Galloway Lumber died in 1964, the surviving members of the ownership group, Jack Cline, E. K. Johnson, and Leslie Bryant, added Bill as a fourth stockholder in a new corporation, Clarksville Wood Products Inc. He was named General Manager of the company and over the years bought out the other three stockholders, becoming the sole owner of the business where he continued to work until retirement when he sold the company in 1999.
Early in his adult life Bill became an active member of the City of Clarksville with his appointment to the Clarksville Light and Water Committee in 1968, becoming chairman in 1970. In 1971 he successfully ran for Mayor of Clarksville and served two four-year terms. During his eight years in office, he oversaw many substantial improvement projects for the city, including urban renewal, street and drainage improvements, establishment of the Johnson County Regional Hospital, a new City Hall, modernization of garbage collection and disposal system, a new water treatment plant and a new city park, Cline Park. After ending his two terms he served on the board of directors of Johnson County Regional Hospital, eventually becoming chairman of the board.
In 1981, Bill successfully ran for an open seat in the Arkansas State House of Representatives, a position he held for 12 years serving under governors Frank White and Bill Clinton. During his years in the state house, he served on several committees with his proudest achievement the passage of an appropriations bill that provided funding for a new headquarters in Clarksville for the Arkansas State Police Troop J. He decided not to run for re-election in 1992 and formally retired from politics. During his business and political career, he served in leadership roles on numerous local, state, and national committees and commissions, including the Arkansas Forestry Commission, Arkansas State Chamber of Commerce, President of the Cooperage National Trade Association, Clarksville Board of Education, Board of Directors of the Johnson County Regional Hospital and Board of Directors of First Security Bank. Bill was also a long time Rotarian where he was a Paul Harris Fellow. Bill joined Harmony Masonic Lodge #433 in 1957 and received numerous Masonic degrees including the 33rd degree – Venerable Master in the Scottish rite in 1991.
Maintaining and improving the original Porter family homestead in Harmony including raising cattle, horses, and a large garden was his lifetime passion and gathering here with family was one of the things he enjoyed and treasured the most. The family would like to acknowledge the compassionate care provided by Edwina Miller, Teresa Taylor, and Kelli Ford in his later years. Born in a house with no electricity or indoor plumbing, Bill Porter lived a full and eventful life and leaves behind a legacy of business success along with many city and county improvements and achievements. But the two proudest pieces of his legacy are his 60 years of marriage to his wife, Anna Lou, and happy life he was able to provide for his children, grandchildren, and great-grandchildren.
In lieu of flowers, memorials can be made to the Clarksville First United Methodist Church or Arkansas Hospice. Visitation will be Thursday, June 23, 2022, at 5-7 p.m., at Roller-Cox Funeral Home Chapel. Funeral service will be Friday, June 24, 2022, at 2 p.m., at First United Methodist Church in Clarksville with Bro. David Henshaw and Pastor Heather Clawitter officiating. Burial will follow at Harmony Cemetery in Clarksville, Arkansas. John Payne, Abe Laster, Jr., Mike Jacobs, Toby Wilson, Matt Wylie, and Steve Morgan serving as Pallbearers. Lee Laster serving as Honorary Pallbearer. Funeral arrangements under the direction of Roller-Cox Funeral Home, online guestbook available at: www.rollerfuneralhomes.com/clarksville