In The Arkansas Gazette’s Nov. 2, 1831, edition, editor William Woodruff describes how he was set upon by Dr. Nimrod Menefee in the empty chamber of the Territorial Legislature and accidentally discharged his pistol before Menefee conked him on the head with a cane.
A tussle ensued that was broken up by members of the House.

Woodruff had been busily copying the House journal for publication in the Gazette when he glanced up in time to see Menefee approaching with his cane raised. Seeing him reach for his dirk and believing he was about to be assassinated, Woodruff lifted his pistol awkwardly, and it discharged.

The attack occurred four days after Woodruff denounced in print a speech Menefee had made in the House denouncing him. Woodruff wrote that Menefee’s “scurrilous” language was “better suited to the meridian of a brothel, than the grave deliberations of a Legislative body.”

Thanks to the efforts of Territorial Delegate Ambrose Sevier, Congress had granted the Territory 10 sections of public land that could be sold to finance a capitol building. Former Secretary Robert Crittenden, now a justice of the peace, persuaded the Legislature to let him trade his home for the 10 sections — a poor bargain for the land. He planned to sell the land to extricate himself from debt.

Woodruff successfully urged Gov. John Pope to veto the 10 sections bill. An override of the veto failed in the House by one vote. According to the Encyclopedia of Arkansas History and Culture, within a few months, the 10 sections sold for about $30,000, and Crittenden sold his home for $6,700.

The House also had voted to take the Territorial printing contract away from Woodruff and award it to his former apprentice, Charles Bertrand, editor of The Arkansas Advocate. Woodruff printed the names of 11 legislators who voted for Bertrand, saying Crittenden had bought their support with gifts of “canvass hams.”

They met to plan their retaliation: They would cancel their subscriptions! Six men ultimately did, but three of them waited until after the legislative session ended.

This 1831 edition, like other newspapers of the day, includes appeals to subscribers to help capture runaway slaves. The Emancipation Proclamation that outlawed the enslavement of human beings was still 32 years away. 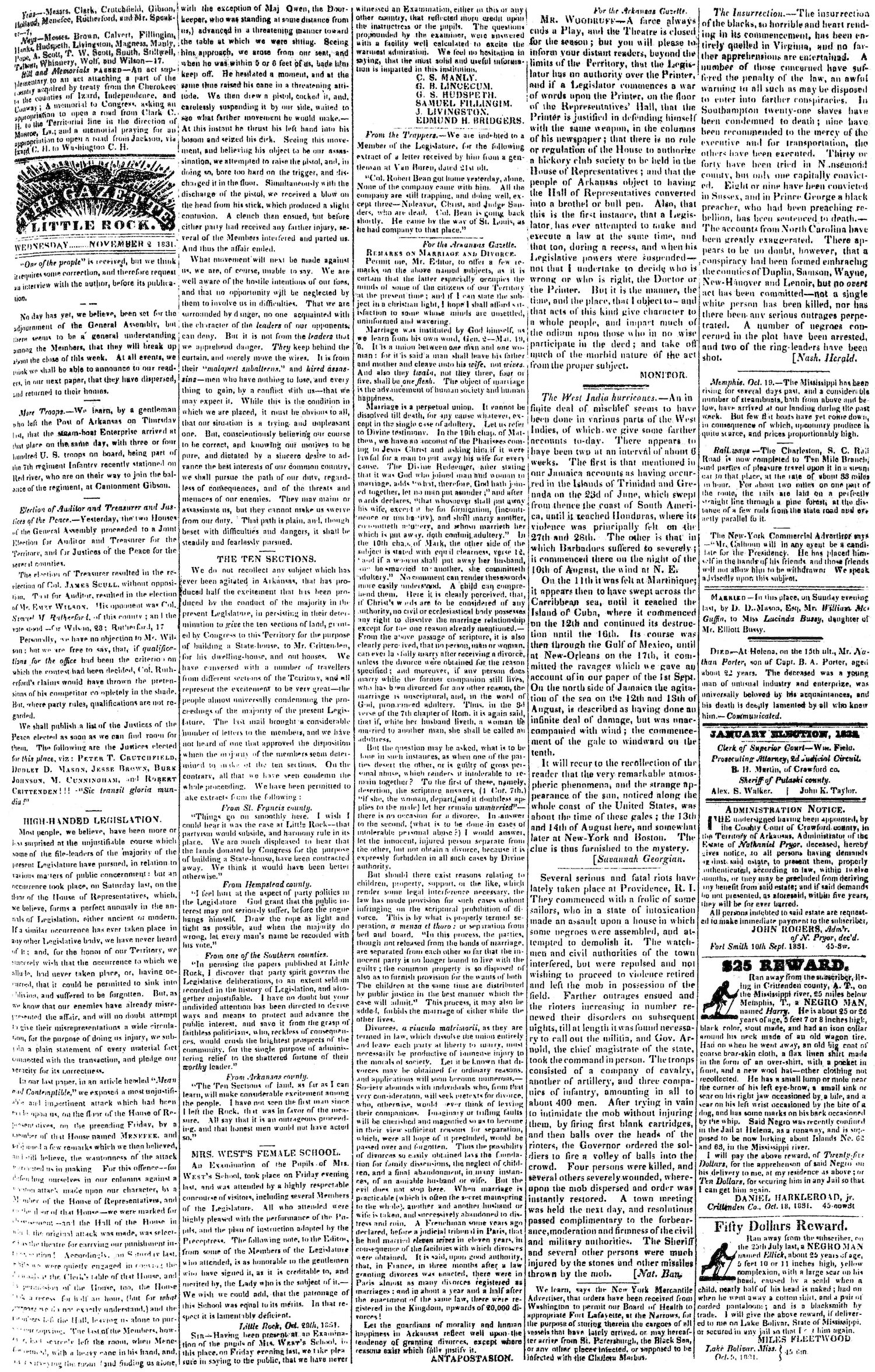