Gravely ill and cut off from reliable news, the one-armed Christopher Columbus Danley and his tubercular partner William F. Holtzman had most of their Sept. 12, 1863, edition of the weekly Arkansas State Gazette type-set when Union forces reached Little Rock. Brig. Gen. John W. Davidson’s cavalrymen rode into town on Cherry Street on Sept. 10, clopping past the Gazette office on the southeast corner of Scott Street at dusk. Maj. Gen. Frederick Steele arrived later that evening.

Historian Margaret Ross writes that Holtzman quickly swore allegiance to the Union, which saved the press from confiscation. According to local gossip, she says, Davidson invited Danley to run the Gazette as a Union paper, “but Danley declined, saying he would make a better federal prisoner than a federal editor.” He didn’t take the amnesty oath until his part of the business was about to auctioned.

That Sept. 12 issue wasn’t printed; and their Sept. 5th is not in Gazette archives. The 1863 record ends with this Aug. 29 edition.

What looks like Page 2 is actually Page 1 of a two-page sheet. “Defend your families and homes,” it urges. “Let everyone go who can fire a gun.” But also it pleads for humane treatment of the wounded “when the impending battle comes off.”

The Gazette was the last Little Rock paper still in production, the True Democrat having run out of brown wrapping paper in July. In “The Little Rock Press Goes to War, 1861-1863” (Arkansas Historical Quarterly, 1969), Michael Dougan explains that, while wartime readership increased as new subscriptions poured in from Texas, paper shortages overwhelmed the Arkansas editors who hadn’t already ridden off to war.

Danley had not been robust since his late 20s, when he almost died from a leg wound in the Mexican War. His cane was not decorative. Rheumatism often overwhelmed him; his eyes were bad. On Oct. 29, 1862, he almost died in a buggy crash two miles outside Little Rock: His thigh and kneecap broken and his right arm so ruined it had to be amputated above the elbow, he was an invalid.

While Steele aimed to win residents’ hearts and minds, Davidson meant to punish the rebels. His Special Order No. 1 handed control of Danley’s press to Union loyalist J.W. Demby, and the Gazette fell silent. 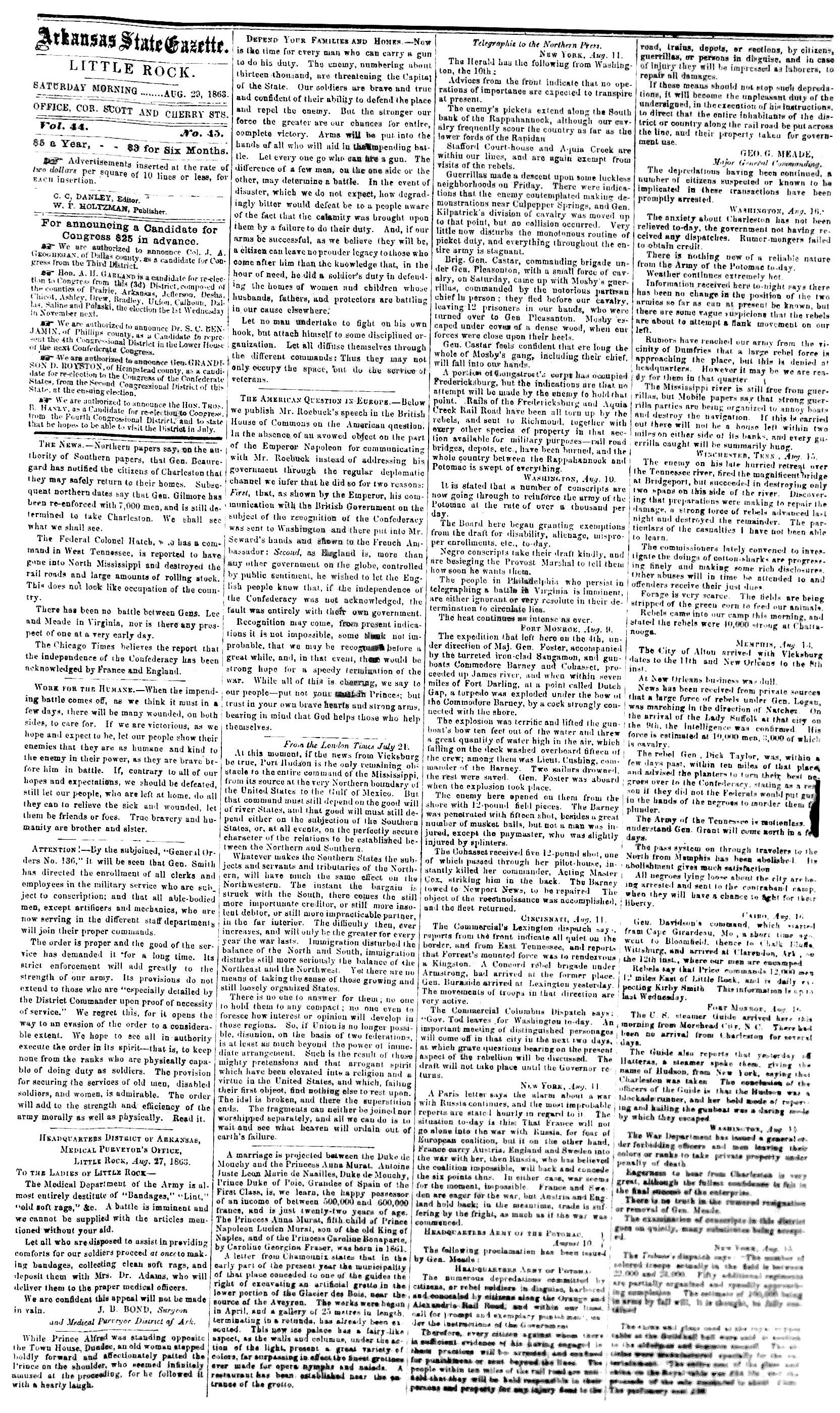