Although it looks like a Page 2, this is Page 1 of the June 28, 1862, Arkansas State Gazette. Trying to conserve paper, editor Christopher Columbus Danley dropped the nameplate and downsized from four to two pages.

On this page, a letter from Brig. Gen. Albert Pike defends his conduct and the conduct of Confederate troops March 6-8 at a place called Elk Horn. This was the Battle of Pea Ridge, a decisive Union victory. Pike had been accused of incompetence and war crimes.

He describes how confused troops and cavalry, without orders from their commander, Maj. Gen. Earl Van Dorn, waited along the telegraph road in an orderly fashion until the Union artillery was almost on top of them. Pike says he tried in vain to rally the men to defensive positions, sent aides to look for Dorn and conferred with a cavalry commander who had decided to retreat -- until retreat became a rout.

A newspaper editor, poet and Mason who originally opposed secession, Pike was the Confederate States' commander for the Indian Territory. He had negotiated treaties with slave-holding tribes and raised a regiment from each on the understanding they would fight the Union Army only if it tried to occupy the Indian Territory.

Dorn, his superior officer, ordered Pike to take his men east to support the Confederate Army of the West. Pike protested but complied; he had 800 Cherokee soldiers and 200 white Texas cavalrymen at Elk Horn.

Writing in the Arkansas Historical Quarterly in 1979, historian Walter L. Brown explains that they came under fire March 7 at Leetown near Pea Ridge while flanking Col. Frank Rector's infantry. After the skirmish, some federal dead were found scalped. Pike was accused of urging the tribesmen to commit atrocities.

This letter appeared in the Gazette one month before Pike resigned his commission, charging that the Confederate States had violated their agreements with the tribes.

Meanwhile, Arkansas newspapers were shutting down as their editors rode off to war. In Community Diaries: Arkansas Newspapering 1819-2002, historian Michael Dougan quotes an estimate that by summer 1862 the state's 30 or 40 papers had dwindled to 10. All them kept running out of paper. When he could find it, Danley printed on wrapping paper. 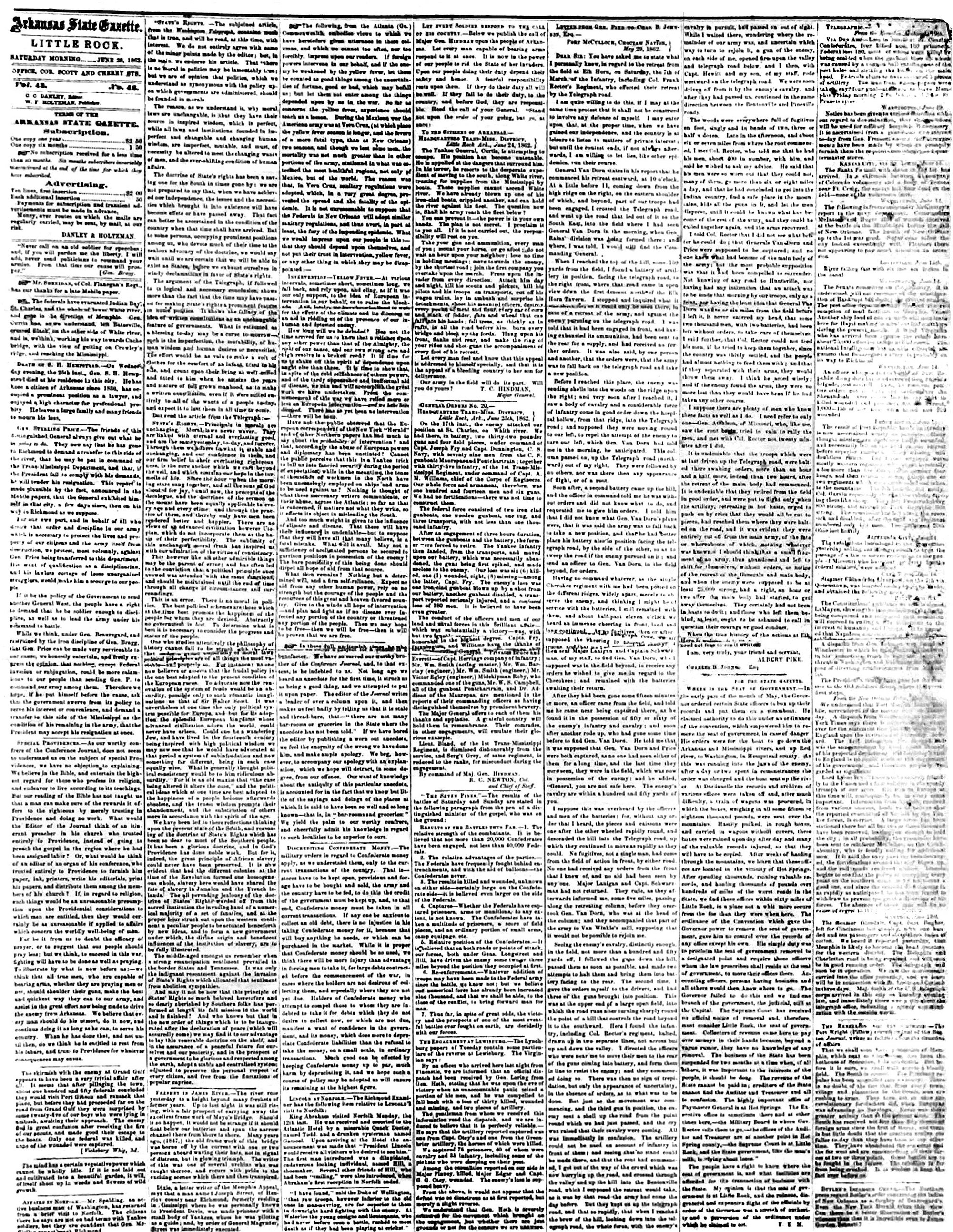