Three-quarters of the county’s residents were black. Among them was James W. Mason (1841-1874), the son of Elisha Worthington, one of the wealthiest plantation owners in Arkansas. Worthington fathered Mason and a daughter, Martha, by one of his slaves. He allowed them to be educated.

Mason became the nation’s first black postmaster, serving the Sunnyside Post Office from 1867-1871. He was a state senator from 1868-1869, and then again from 1871-1872; but in early 1871 there was friction surrounding his appointment to county judge by U.S. Sen. Powell Clayton, a former Arkansas governor.

Clayton had offered Mason the position, allegedly in exchange for political support, but instead appointed Major Ragland (probably Major E.D. Ragland of Lee County, according to the Encyclopedia of Arkansas History and Culture). Mason assumed the role anyway, kicking Ragland out of the county on one occasion and effectively persuading him to leave on another, while backed by 400 armed black men.

In December, after a county meeting in Lake Village, John W. Saunders, Jasper Dugan and Curtis Garrett, all white men, were arguing in Saunders’ store with a black lawyer named Wathal G. Wynn. As the dispute escalated, Wynn called Saunders a liar. Saunders drew his pistol on Wynn, killing him.

Mason contended that Wynn was a victim of members of the Ku Klux Klan, but extensive Klan involvement has not been documented.

Saunders, Dugan, and Garrett were all held in the county jail for their part in the murder, but a large group of black citizens stormed the building, took the three men to the woods and shot them.

Most of the white citizens fled. Conflicting accounts were rampant, some claiming that there was hardly a white woman left in the area, that the white men were afraid for their lives, and that plantations and fields were succumbing to ruin. Other accounts said that the mob had set up a control “system,” but otherwise the rights of the citizenry were intact.

Acting Arkansas Gov. Ozro A. Hadley sent his adjutant general to Lake Village, and in January 1872 he sent 15 Guardsmen. The county sheriff requested and was granted 250 federal troops. The federal soldiers’ stay was short, but they achieved a tenuous peace; the governor’s contingent of Guards remained until April 1872.

To read more about Mason, go to arkansasonline.com/200/1871bonus. 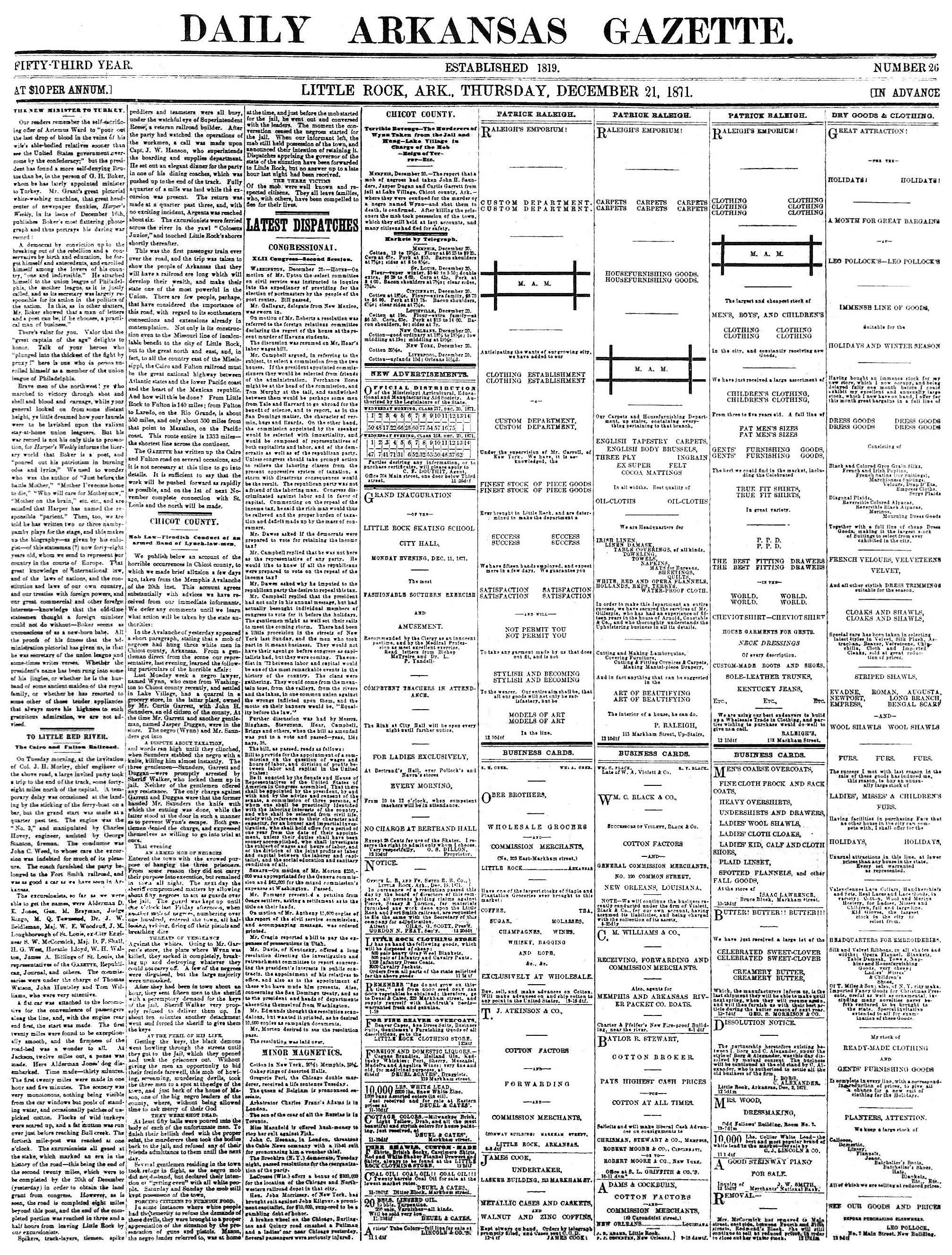