The whole world watched and waited for official U.S. response to the sinking of the British merchant ship Lusitania by a German submarine on May 7, 1915, a tragedy that had claimed more than 100 American lives.

The United States had remained neutral in The Great War, but the Arkansas Gazette’s headline on May 8 proclaimed the situation the “most serious of war,” and the newspaper speculated whether it would propel the United States into the conflict.

Emotions on both sides of the Atlantic grew to a fevered pitch. The Germans claimed the British ship was fair game because it carried ammunition and other war materials in a declared war zone, but the British and American officials deemed this a poor excuse given the submarine issued no warning before launching its torpedo, the Lusitania was not equipped with guns, and the noncombatants aboard had not been given — per international law — an opportunity to evacuate.

New York Herald artist G.A. Coffin read all the cable dispatches about the liner’s demise and decided to help readers imagine it. His rendering of the catastrophe was printed on the front page of this May 12, 1915, edition of the Gazette, the caption stated it “probably is as realistic a picture as it is possible to obtain.” The great liner disappeared in just 20 minutes, sinking bow first off the coast of southern Ireland and taking with her more than 1,000 of the nearly 2,000 souls on board.

U.S. President Woodrow Wilson thought long and hard over the country’s response to the situation, and no official statement was made for several days. In a speech given in Philadelphia on May 10, Wilson did not refer directly to the Lusitania tragedy, but he praised peace and insisted there was such a thing as being too proud to fight: “There is such a thing as being so right that it does not need to convince others by force that it is right.”

On May 12, the Gazette reported that a proposed communication with Germany had been unanimously approved by the cabinet, and that it would be sent in a day or so. Those close to the president said “he realizes that events over which the United States might have no control might make vigorous action necessary.” The Gazette noted that in an apparent effort to ease tensions between the two nations, Germany had given its submarine commanders orders to leave neutral vessels alone as long as they weren’t engaged in hostile acts.

By December 1915, the German and U.S. governments hadn’t worked out a solution, the United States was still asking for “a disavowal of the sinking of the Lusitania and reparation for American lives lost,” while Germany asserted that “her instructions to submarine commanders to discontinue such attacks … is the most effective disavowal.”

Another year had passed and the United States had averted war, but conflict “over there” had been brought much closer to home. 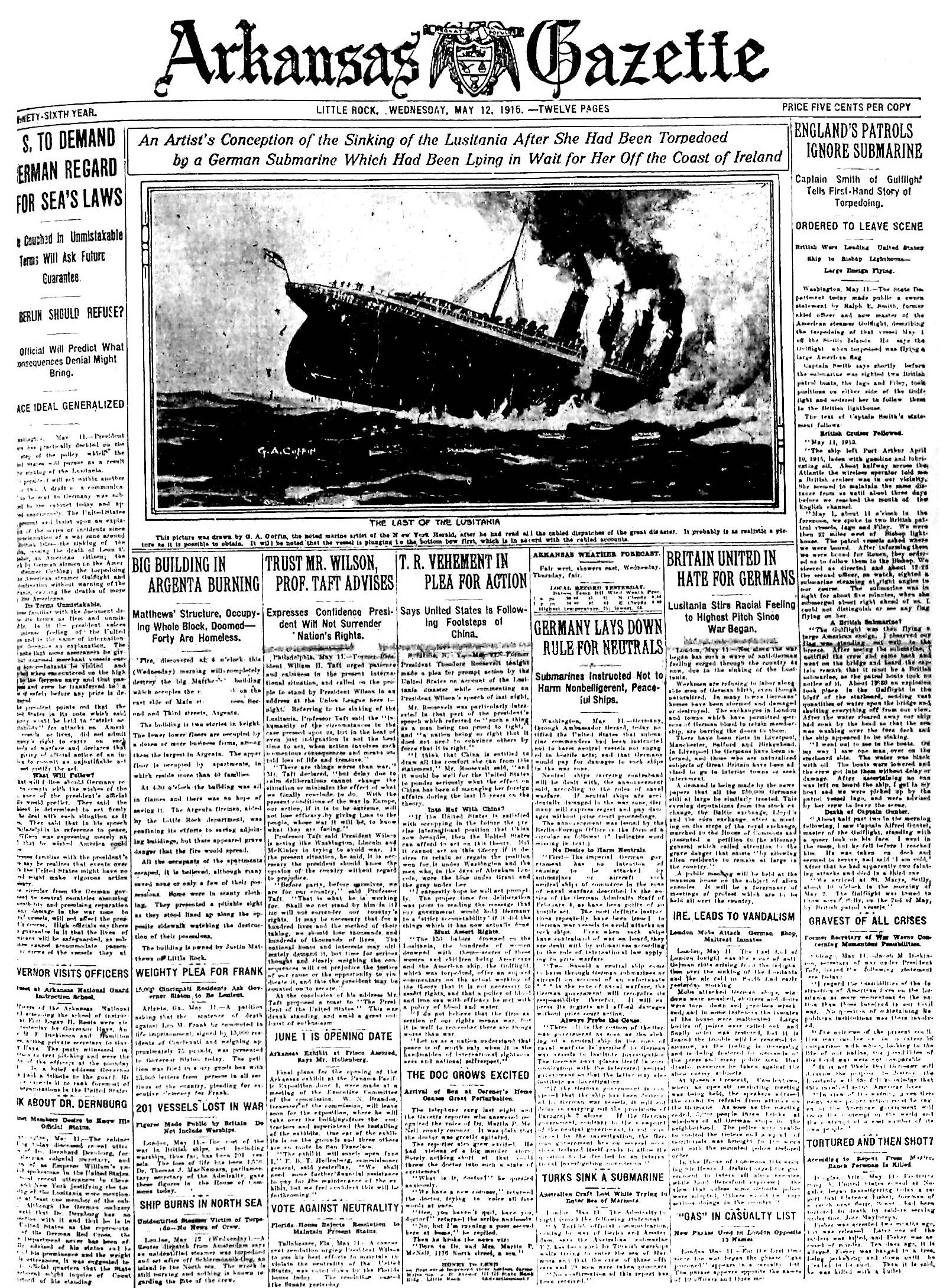