Initial reports from northwestern Guyana were shocking enough to nab a one-column story on the front page of the Arkansas Gazette.

A congressman, U.S. Rep. Leo Ryan, D-Calif., had been shot and killed while preparing to board a plane at Port Kaituma, Guyana, the article said. Four others were said to have perished.

The State Department could not initially confirm the deaths.

Ryan, his aides and a group of journalists had been on a fact-finding visit to the People’s Temple settlement in Jonestown, named after the temple’s founder, pastor Jim Jones, formerly of San Francisco. They planned to return to the United States with a small group of Americans who had grown disillusioned with Jones’ community. Relatives of People’s Temple members, alarmed by Jones’ treatment of his followers, had urged their congressman to make the trip.

At dusk, a gunman or gunmen had opened fire on the party, turning the South American airstrip into a killing field.

By Nov. 20, the Gazette was able to report that Ryan’s death had been confirmed. There were also “unconfirmed reports of mass suicides,” the Gazette said, noting, “200 reported dead.”

The magnitude of the toll was becoming more clear as this Page 1 of the Nov. 21, 1978, paper went to press: 409 dead, with hundreds of others missing, the Gazette reported.

“Some of the dead cult members were shot, but most apparently lined up and took doses of cyanide poison mixed in a tub with fruit-flavored water,” the Page 1 story stated. “A witness said poison was spoon-fed to babies.”

“Several hundred bodies were sprawled around a communal meeting hall, the victims packed so closely together that many had fallen across others who had died minutes earlier. Some had embraced as they died,” the story noted.

The dead had left behind hundreds of American passports, 40 automatic weapons, ammunition, valuables, and an estimated $1 million worth of gold, jewelry and cash.

By Nov. 25 the Gazette reported the death toll had reached 780 people and that soldiers were finding “new bodies every minute.”

“The bodies were just piled up,” one official said.

Eventually, 913 corpses would be removed from the compound.

Of those, 35 were listed as Arkansas natives, federal officials later said.

Using fingerprints, officials were able to identify most of the Temple’s adults. The identities of many of the infants and children were never established.

Ryan’s body was quickly returned to California. After a funeral in South San Francisco, where he had served as mayor, he was was laid to rest Nov. 22 in Golden Gate National Cemetery.

Among the mourners was San Francisco Mayor George Moscone, who would die five days later at the hands of an assassin. 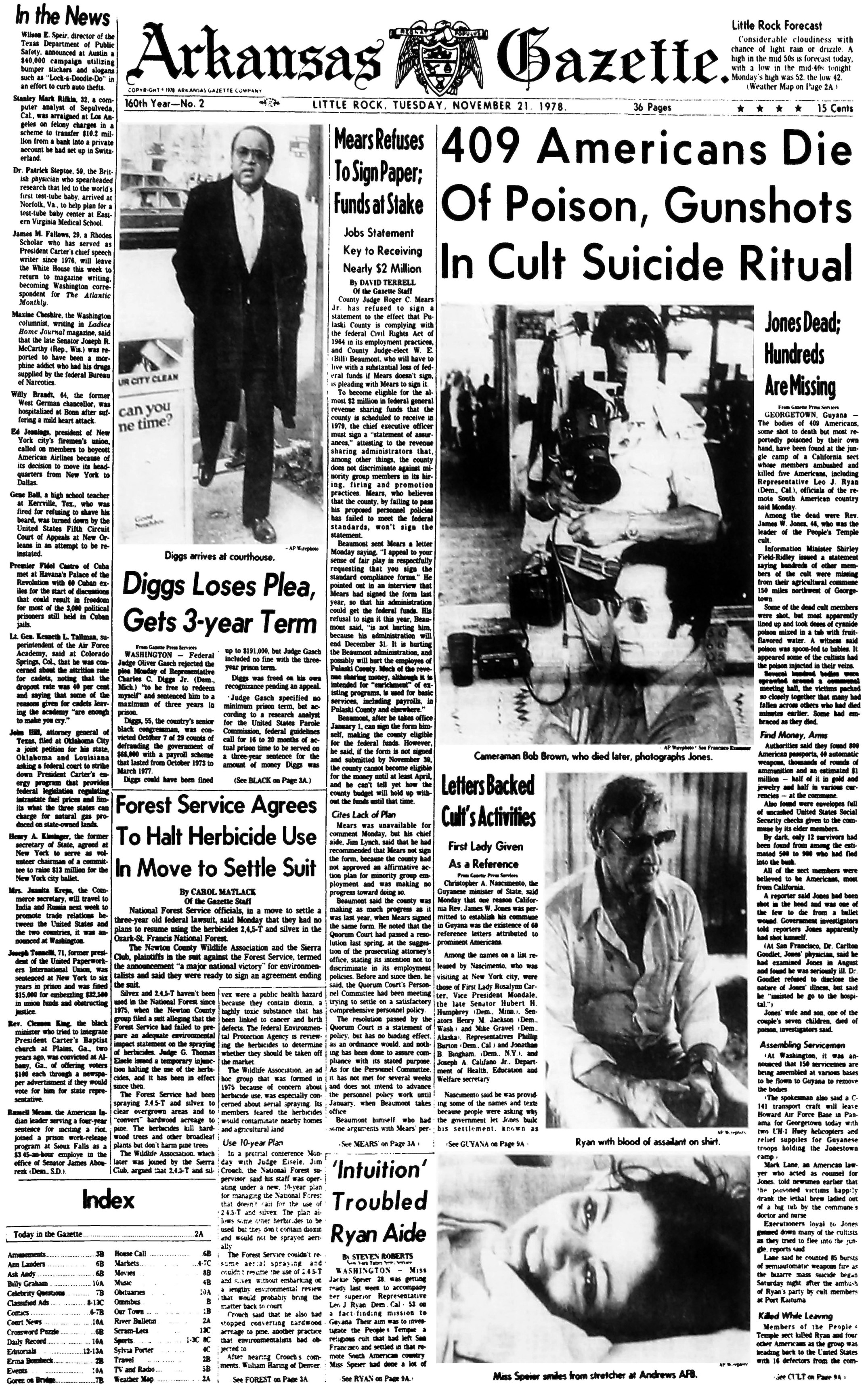