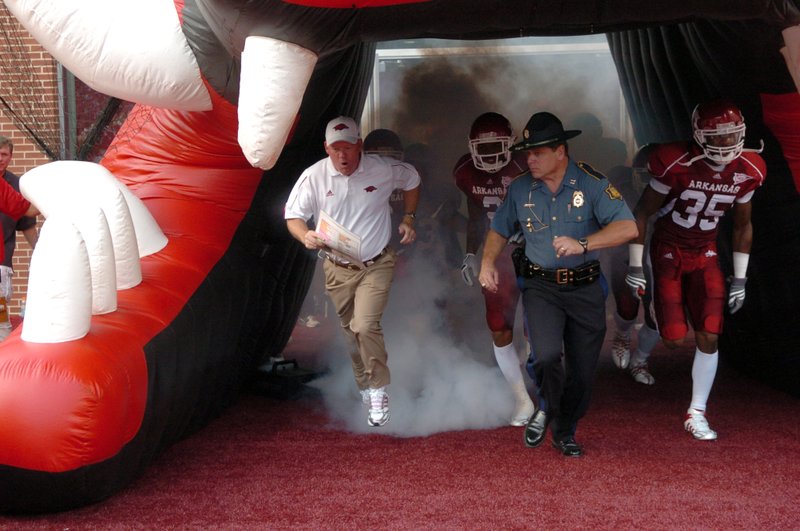 FILE - Bobby Petrino (left) and Capt. Lance King with the Arkansas State Police (right) run with the Razorbacks onto the field at Reynolds Razorback Stadium in Fayetteville. ( Michael Woods)

Inside the Petrino Crash 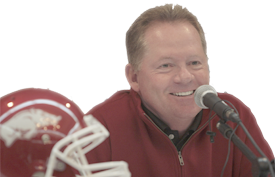 PETRINO STATEMENT: “I was informed in writing today at 5:45 p.m. that I was being terminated as head football coach at the University of Arkansas. The simplest response I have is: I’m sorry. These two words seem very inadequate. But that is my heart. All I have been able to think about is the number of people I’ve let down by making selfish decisions. I’ve taken a lot of criticism in the past. Some deserved, some not deserved. This time, I have no one to blame but myself." CONTINUE READING HIS STATEMENT

The report was released Monday afternoon by the Arkansas State Police along with King's statement.

In his statement, King said he was on an errand when he received a call about an accident involving a motorcycle belonging to the Arkansas coach. King said he called a cell phone number he had listed for Petrino and left a voicemail.

King goes on to say that an unidentified female returned the call. The female then said that Petrino was hurt and headed to the emergency room, but asked that King meet them at Crossover Road and Highway 16 in east Fayetteville "in order to take Petrino to the hospital."

When picked up by King, Petrino was initially told he would be taken to Washington Regional Medical Center, but instead, Petrino asked to be taken to Physicians' Specialty Hospital, where he and a "Dr. Arnold" would meet up and Petrino would receive treatment.

Petrino said he had called Arnold prior to his meeting with King, according to King's statement.

King adds that Petrino did not say much else on the ride to the hospital, only groaning in pain. King said that Petrino told him a gust of wind blew him off the road, causing the accident.

After dropping him off at the hospital, Petrino asked if passenger information was required and King said "all we need to know is the passenger's name and address." King added that he told Petrino that ASP had been getting phone calls from people who had said their was a passenger with Petrino. That passenger was later found to be Jessica Dorrell, 25, of whom, Petrino said in a statement Thursday night he had a "previous inappropriate relationship."

Petrino didn't ask King to keep her name out of the report, according to King's statement.

King was also advised by his supervisor to allow Petrino to be interviewed with presence, which King agreed to.

Near the end of the statement, King said he phoned Petrino on Thursday at 2:50 p.m. to let him know the accident report would be released shortly. UA Athletic Director Jeff Long said in a press conference Thursday night that Petrino told Long of the situation involving Dorrell at 3:12 p.m. that day.

During the season, King - a member of the Arkansas State Police since 1987 - also serves on Petrino's security detail during game days.

Petrino broke several ribs, sprained his neck and cracked a vertebrae in the accident. It was later discovered that Petrino was riding with Dorrell at the time of the crash. Long placed Petrino on paid administrative leave later Thursday, pending an internal investigation into the matter.

Shortly after the accident, Petrino refused an offer to call 911. According to a 911 call made after the coach had left the scene, Petrino was said to be "bleeding quite a lot" from his face. A passing car took Petrino and Dorrell back to Fayetteville, where Dorrell departed for her own vehicle while King took Petrino to a local hospital.

The passing motorists were later identified as Benjamin Williams and Jody Diane Stewart, both of Ozark.