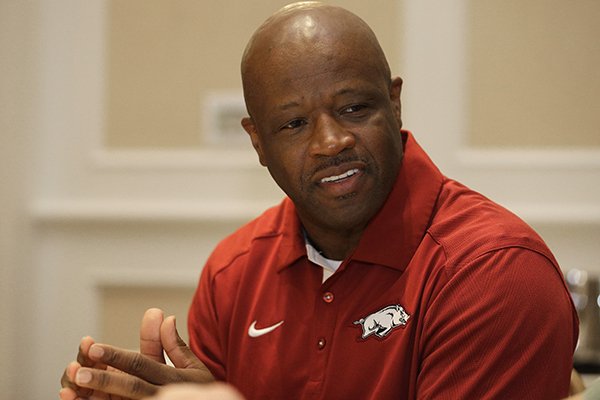 It wouldn't have been a total shock if the Hogs had been picked last, but the media seemed to think Missouri (No. 14), Alabama (No. 13) and Tennessee (No. 12) will be worse.

Perhaps it should be noted that Alabama and Tennessee have new coaches and Missouri will too unless the Tigers get it together this season, which they might with the addition of Steve Shields as the top assistant responsible for breaking down opponent game film, something he is great at doing.

Schools that also have first-year coaches in the SEC are Florida and Mississippi State, but Michael White (Gators) and Ben Howland (Bulldogs) inherit some talent.

That could change slightly if Anton Beard gets reinstated. He is currently suspended after allegedly passing counterfeit money.

If Beard, who had a clean record, gets some sort of probation from the legal system, the same should be done at the UA. I won't even speculate on the number of games he should sit out if that happens, but he deserves a second chance.

The Hogs have added a couple of shooters in Dusty Hannahs, who played two seasons at Texas Tech, and freshman Jimmy Whitt.

Hannahs made eight consecutive three-pointers once for the Red Raiders and is just as effective from behind the NBA three-point line.

While on the subject of basketball, Louisville Coach Rick Pitino's resignation is being called for across the country, and it should be.

His program -- repeat, his program -- was using hundred dollar hookers to recruit players in the athletic dorm on campus, and the man who cheated on his wife in a local restaurant claims he didn't know anything about it, even though it was going on for four years.

What's on the face of the University of Louisville is worse than egg.

If he honestly didn't know about this, then why not?

He and he alone is supposed to be the person most accountable for the basketball program. That's why he is paid the big bucks.

If he doesn't step down, then he should be fired.

The NCAA suspended SMU's Larry Brown for violations much less egregious than what has happened at Louisville. The NCAA said ignorance of the violation was no excuse in that case.

No telling how much bullying Michigan punter Blake O'Neill has endured since he fumbled a snap with 10 seconds to play Saturday and Michigan State scooped it up and scored to win 27-23.

When asked why he was talking about the fumble, he replied: "Why not? Pick yourself up, dust yourself off and go again. That's the beauty of sport. You get a chance to prove yourself against Minnesota [Oct. 31]. That we're improving and we've learned from the stuff we did against Michigan State."

That showed great courage and spirit, which is probably why his teammates have rallied to show their support, but it leaves one final question.

A fourth-down play would have taken at least five seconds, leaving Michigan State one shot at a Hail Mary.