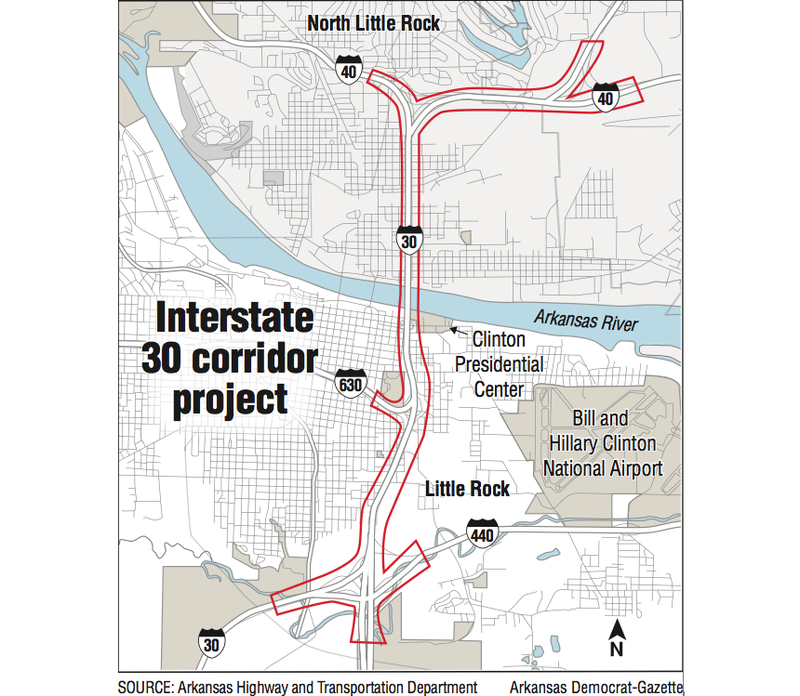 The estimated price tag to rebuild the Interstate 30 corridor through the downtowns of Little Rock and North Little Rock, including replacing the Arkansas River bridge, is now approaching $600 million. 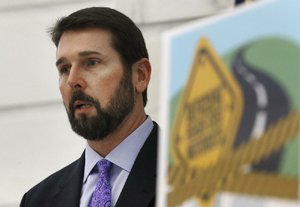 The working budget the Arkansas Highway and Transportation Department has been using for the project is $450 million, but the most recent estimate for all the proposed improvements adds another $140 million to the cost, said department spokesman Danny Straessle.

Straessle made clear that the costs were rough estimates. "None of it is set in stone just yet."

The state Highway Commission gave Scott Bennett, the department director, authority to explore the gap-financing option in June. He made clear this week that the agency would use such financing for the project.

"This is the direction we believe we need to go," he said at a commission meeting Wednesday.

The commission then approved his request to secure a financial adviser to aid in developing the requests for proposals from contractors interested in doing the project.

The method the department is employing is among the highway construction and financing solutions the Federal Highway Administration promotes as an innovative way to complete increasingly complex projects.

The "30 Crossing," as the department now calls it, will be the first road and bridge construction project in Arkansas to employ both the design-build method and gap financing, underscoring the complexity of the project to ease congestion through the corridor.

In design-build, contractors and designers collaborate at the same time to engineer and construct projects, which supporters say can be quicker and less expensive than the traditional way such undertakings are contracted, which is to design first and then award the construction contract to the lowest bidder.

The I-30 project is a handful.

The collector-distributor lanes would be separated from the six main travel lanes to allow for slower and safer speeds to leave and enter the interstate.

The department has held at least 50 meetings with the public, elected officials and interested entities, including the North Little Rock School District, the Clinton Presidential Center and others with property within the corridor, Bennett said.

The environmental-review phase is now focusing on problems associated with the Arkansas 10 exit and spacing of the interchanges on the north side of the river, both of which are in response to community concerns, he said.

"Our department has done a great job of balancing the engineering and the community," said Frank Scott Jr., a commission member from Little Rock.

The method to build and finance it may be new to Arkansas, but it has been employed elsewhere in the United States and is promoted by the Federal Highway Administration as a way to help complete projects that would be difficult to finish under traditional methods. It is often employed by agencies with "cash-flow constraints."

"This approach takes advantage of the efficiencies of the design-build (DB) approach and also allows the project sponsor to completely or partially defer financing during the construction phase of the project," according to the agency.

Other projects that have used what the agency calls design-build finance include the $302.1 million Innerbelt east bridge in Cleveland, the $139.5 million Interstate 485 Loop in Charlotte, N.C., and the $833.7 million Northwest Corridor project in Atlanta.

The Highway Department and its consultants will hold a series of meetings about the corridor beginning this month. They include a stakeholders meeting Sept. 17, a vision workshop Oct. 6 and a public meeting Oct. 27.

The department is now developing a request for qualifications from contractors interested in working on the project.

The financing component would be part of the request and could include banks, or the contractors might be able to finance their part themselves, Bennett said.

The request for qualifications will go out in December with responses due in February. The responses will be short-listed to three or four firms, which then will be required to develop their proposals. Those will be due in October 2016. Bennett said a recommendation on which company the department will retain will go to the commission in December 2016.

The notice to proceed, which allows the contractor to officially begin the project, will be issued in April 2017. With the contractor being handed an unfinished design, Bennett said he doesn't expect the project to be "turning dirt" until early 2018.