Early signing period has share of pros and cons 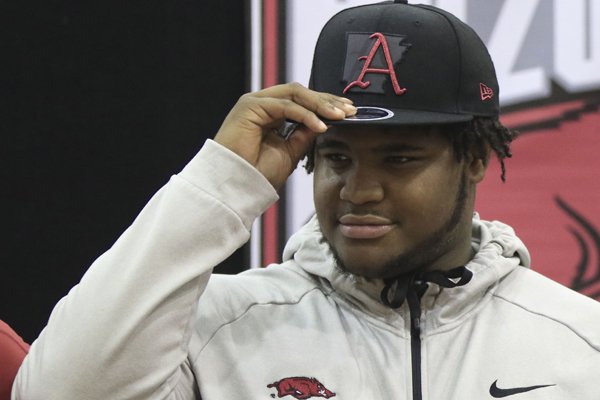 Fordyce defensive lineman Billy Ferrell puts on an Arkansas hat during a signing day ceremony on Wednesday, Dec. 20, 2017, in Fordyce.

Depending on who you ask, opinions vary on the college football early sign period that started Wednesday and ends at midnight tonight.

After only having 13 days to recruit before the start of the early signing period, Arkansas Razorbacks Coach Chad Morris has changed his mind and is no longer in favor of the new signing period.

Pulaski Academy Coach Kevin Kelley sees the good and bad of the new period. One of his offensive linemen, Luke Jones, committed to the University of Arkansas, Fayetteville and former Coach Bret Bielema in July but now plans to wait until Feb. 7 to sign with a school.

"One example of bad is like in Arkansas when a coach loses his job and the next coach comes in and has to hurry and recruit before the new early signing period," Kelley said. "The recruits built relationships with old staff and they really have to make some quick decisions with the new staff. Kids don't usually commit to buildings on a campus. They commit to people. The early signing period happens just a couple of weeks after when staffs at FBS schools turn over."

For prospects that know where they want to sign, Kelley thinks the early signing period is a good thing.

"If a kid knows where [he] is going to go, he can sign early and don't have to worry about it or get the pressure from other schools anymore," Kelley said. "That is more of a blessing than anyone can understand that hasn't been through it. It starts off as exciting for the kids but becomes really stressful really fast."

The NCAA contact period, which allows coaches to visit prospects off campus, began Nov. 26. The dead period which forbids off-campus visits began Dec. 18 and will last until Jan. 11 at midnight.

"I think it's kind of redundant only because now there's a dead period where you can't recruit until mid-January," said Lemming, who has been covering the national scene for 39 years. "So that means you only have a few weeks to recruit anyway for the rest of the class. They should've done it in October or early November"

Lemming also likes the idea of an early signing period in August.

"Lockdown all of those guys and then let all the other kids make decisions in February," Lemming said. "A good number of these kids are committed by September."

If the early signing period is moved to August, Lemming said there needs to be an out for prospects that sign with schools that have a coaching change.

"If you're doing it in September, and if the coach is fired or leaves, then those kids are set free," Lemming said.

"I think it's great for athletes that are 100 percent sure about where they want to go to school and play," said Jeff Pool, an Arkansas graduate. "For our family, it worked out great. Bumper knowing where he wanted to be and having planned on graduating early, it couldn't have worked out better."

Jonesboro Coach Randy Coleman believes the early signing period helps relieve the pressure of having to wait until the traditional February signing period.

"If for nothing else, it allows a young man to be a kid for the last few months he has in high school," Coleman said. "These guys, these football players, are about to get into a much bigger arena, but they're still kids. The early signing period allows them to refocus on being just a high school kid and enjoy their friends, towns, and schools before moving to a larger stage."

Jonesboro offensive tackle Noah Gatlin also committed to Bielema during the summer. He's decided to wait until Feb. 7 to sign with a school.

Whether a recruit signs in December or February, Coleman thinks there will always be pressure on prospects.

"Unfortunately, I think there is going to be pressure on a kid until he signs regardless of the date," Coleman said. "And, for good reason. He is deciding on the college or university that will give him a degree and direction to provide for he and his family in the future."

Offensive lineman Silas Robinson of Yoakum, Texas, signed with the Hogs on Wednesday.

"I think it's good that it allows coaches to see where they are with the people who are committed to them," Robinson said. "I don't see anything bad with it honestly."

Lemming believes the NCAA may revisit the benefits of the early signing period.

"Especially after this week and there's a lot of chaos, they'll definitely do it," Lemming said. "Then if there's kids in January complaining I shouldn't have signed because I didn't know this coach wasn't going to be there."