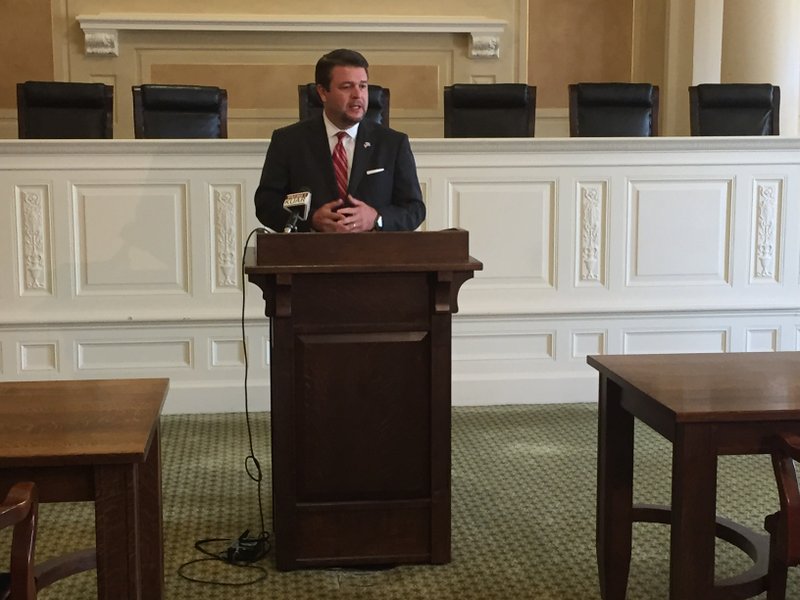 Sen. Jason Rapert, R-Bigelow, who sponsored the 2015 law to erect the 10 Commandments monument on state grounds, speaks about its destruction at a news conference Tuesday, June 28, 2017.

A replacement Ten Commandments monument has already been ordered after the original statue was erected on Arkansas Capitol grounds and toppled less than a day later, a state senator said Wednesday.

“This law will be fulfilled, and we will raise the funds to make sure it’s put back where it should be,” said Sen. Jason Rapert, R-Bigelow, who spearheaded the 2015 law to erect the 6-foot monolith.

Early Wednesday, a driver — identified by authorities as 32-year-old Michael Tate Reed of Van Buren — drove a vehicle into the newly constructed statue, apparently filming the act live on Facebook.

Rapert told reporters at a news conference Wednesday of his belief that the act was done in a “premeditated fashion.”

“It appears that he knew exactly what he was doing at the time,” the legislator said, adding that such destruction cannot be tolerated.

Rapert called on elected officials to take a stand against violence and against people “using weapons to destroy things” based on differences in viewpoints.

“That’s the same hatred, that’s the same motivation that motives somebody to put on a mask and take a bat and go to a college campus and attack somebody who is standing there exercising their free-speech rights,” he said, later referencing the shooting at a congressional baseball practice in Virginia.

In his remarks Wednesday morning, the state senator said that he could not comment on the driver’s mental state.

“I hope that if he is mentally unstable, that they will get him some help,” Rapert said.

The new monument will be carved from the same mahogany granite found in a South Dakota quarry and will likely reside in the same spot on Capitol grounds, Rapert said.

Rapert said the nonprofit he set up after his 2015 bill passed into law is currently taking donations to pay for the new stone. He plans to fund the replacement monument with private money and avoid using state funds, he said. If Reed has car insurance, that company might have to pay the state of Arkansas for damage, the senator added.

“I just don't believe in rolling over for folks that carry out these acts,” Rapert said.

“We will rebuild. In fact, we should build the monument bigger and higher to show that [we] will not be intimidated,” the senator said.