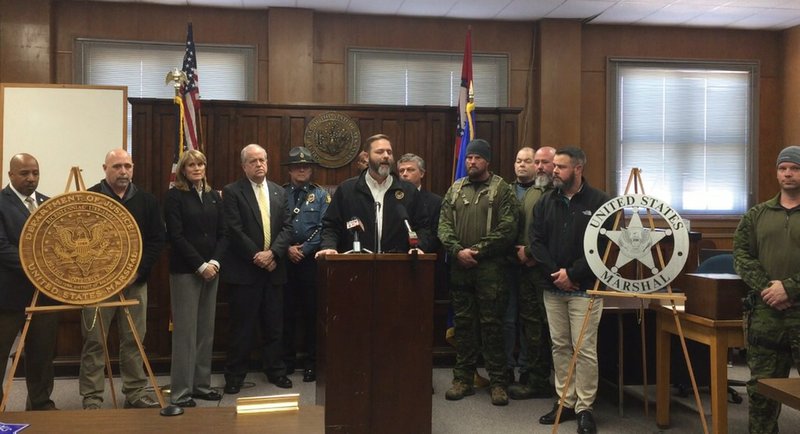 Authorities announced at a Tuesday news conference that Operation "Press Your Luck" had netted 44 arrests in eastern Arkansas.

‪Between 6 a.m. and 2 p.m. Tuesday, Hiland said approximately 44 of 63 active warrants were executed as a part of Operation “Press Your Luck,” resulting in the arrest of at least one man accused in a Nov. 21 homicide. ‬

Smith said this operation would help to quell rising crime in the city.

“We’re trying to bring back law and order to our city and county,” Smith said. “Today was a good day.”

Operation "Press Your Luck" is a United States Marshals Service-led operation designed to target fugitive gang members wanted on arrest warrants for violent criminal offenses. The intent of the operation is to provide communities with immediate relief from violent gang-related crime.

Cody Hiland, U.S. Attorney for the Eastern District of Arkansas, and leaders from multiple federal and state law enforcement agencies including the U.S. Marshals, ATF, FBI, DEA, Arkansas State Police were present at the press conference.

This isn’t the first time Helena-‪West Helena‬ has been the target of a multiagency investigation.

The Arkansas Delta became the focus of an FBI-led drug trafficking investigation — the cities of Marianna and Helena-West Helena in particular.

On Oct. 11, 2011, about 800 law enforcement officers fanned out across the area to round up most of the 71 defendants named in eight indictments.

Those arrested included major drug dealers and five law enforcement officers, most of whom went on to plead guilty, while others were convicted at trial.