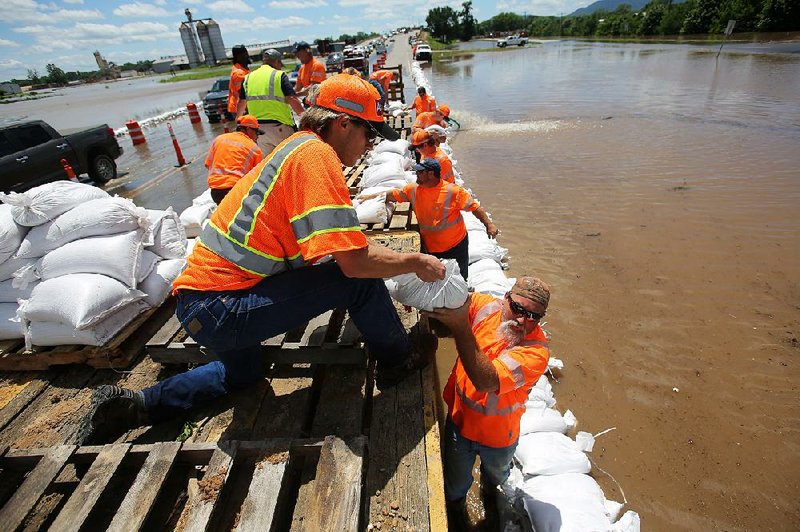 Jacob Loomis (center), Gary Hogrefe and other Arkansas Department of Transportation workers set out sandbags Thursday on the approach to the Arkansas 7 bridge over the Arkansas River at Russellville.

FORT SMITH -- Flooding along the Arkansas River has caused a lot of damage to the state's infrastructure, and it will take some time before Arkansas fully recovers, the governor said Thursday after an aerial survey of the river in central and western Arkansas.

Gov. Asa Hutchinson was joined by U.S. Sens. John Boozman of Rogers and Tom Cotton of Dardanelle, U.S. Rep. Bruce Westerman of Hot Springs, and an aide of U.S. Rep. French Hill of Little Rock on the flyover to assess the damage from ongoing flooding along the Arkansas River. U.S. Rep. Steve Womack of Rogers joined the group later at a news conference in Fort Smith.

An aerial view from Arkansas National Guard helicopters revealed scattered areas of flooded land from Little Rock to the western edge of the state in Fort Smith.

"As I flew over today, the most significant impression I had is that it's hard to imagine the magnitude of the flooding," Hutchinson said during a news conference at the Garrison Avenue Bridge in Fort Smith. "It is hard to comprehend. We have never seen this before, and we have never had to deal with this before."

Heavy rains in Oklahoma and Kansas forced the U.S. Army Corps of Engineers to release water from a swollen lake at a hydroelectric dam near Tulsa into the Arkansas River in Oklahoma.

That created a surge of water that has swept downriver into Arkansas, where high, rapid flows have spilled over the banks of the river and forced some residents to leave their homes.

National Weather Service officials have said flooding will continue along the river as water crests on its way downstream over the next week toward the Mississippi River. Tributaries and lakes connected to the Arkansas River also will be affected by flooding because the Mississippi River is full, leaving no other places for water from the Arkansas River to go, officials said.

Hutchinson said Thursday that more than 500 homes have been affected by flooding. One death also has been linked to flooding. Police in the Sebastian County town of Barling found 64-year-old Tommy Richard Adams of Charleston dead in a submerged vehicle Tuesday on Arkansas 22 near Fort Chaffee.

On Thursday, the Guard helicopters flew quickly from city to city, but the views were mostly the same -- brown, murky water slowly overtaking the land. Floodwaters topped county roads, creating what from the air looked like small lakes. Trees poked up from the water like candles on a birthday cake. Several parks were submerged, with only treetops and the tops of structures visible.

"It really puts it all in perspective," said Mark Berry, adjutant general for the Arkansas National Guard. "We have a long road ahead of us."

Hutchinson also said the disruption in the state's navigation system has caused an estimated daily loss of $23 million to the state's gross domestic product.

"That is something we don't think about very often, but how that disrupts the flow of raw materials, finished product from our factories, and how it impacts our ability to get product in or out is significant," Hutchinson said during the news conference.

Late Thursday night, the Federal Emergency Management Agency announced that President Donald Trump had authorized it to identify, mobilize and provide, at its discretion, equipment and resources necessary to alleviate the impact of the emergency. No monetary amount was mentioned in the announcement.

"We'll just have to wait day by day whether any counties need to be added," Hutchinson said. "I expect that will happen as time goes on."

Infrastructure will be affected, Cotton said.

"Water treatment plants, warehouses and power plants have been lost," Cotton said. "The rebuild will continue for many months, but I am encouraged by the stories I have heard about the resilience of Arkansans."

As the helicopters made their way along the river, farm fields appeared sporadically out of the brown water and farm equipment jutted out of the muck.

"One of the greatest impacts we have seen is in the farmland that has been flooded, thousands of acres," Hutchinson said at the news conference as river water churned nearby. 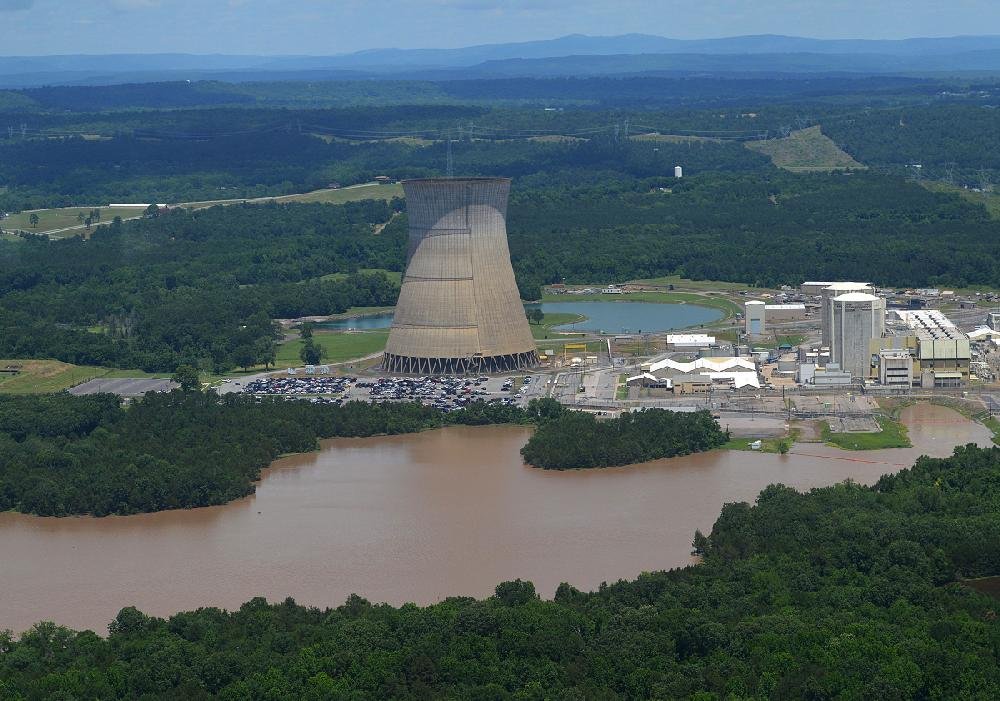 FILE — Floodwaters flow near the Arkansas Nuclear One power plant on Lake Dardanelle outside Russellville in this May 30, 2019 file photo.

The flooding comes at a time when Arkansas farmers are also dealing with the effects of the nation's trade war. Hutchinson said Arkansas Secretary of Agriculture Wes Ward is monitoring the loss of crops and farmland.

"Farmers are very resilient," Hutchinson said. "If the water recedes quickly enough, crops might still be planted, but the crop loss will need to be measured." 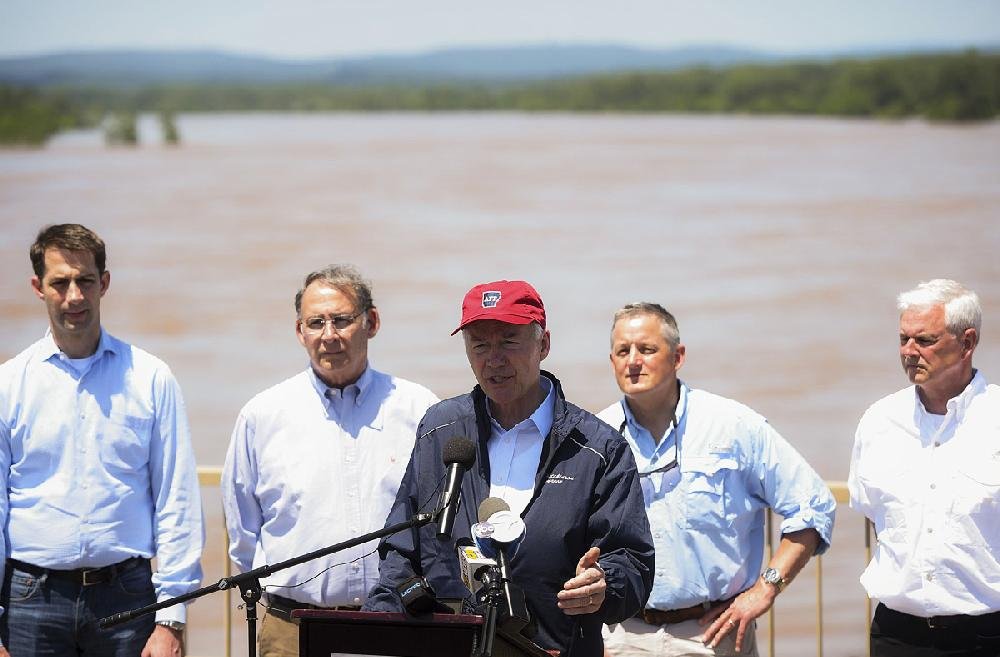 The governor cautioned that federal aid might not entail exactly what some Arkansans expect.

Westerman said much of the river's infrastructure will need to be examined in the coming days.

"I often say these waterways are out of sight and out of mind. Of course, they are in full sight today," said Westerman, who sits on the House Transportation Committee's water and environment subcommittee. "They are a very valuable part of our economy and a valuable part of flood control and protection.

"The infrastructure on these rivers is old and needs repair work done on it. It's not just here in Arkansas. It's happening in Oklahoma and on the Missouri and Mississippi rivers."

Despite the need for repairs, Westerman said he is impressed that the river's infrastructure has held up as well as it has.

"The infrastructure on the river was already in need of repair," Westerman said. "It really is a testament to the architects who built it years ago that it's still holding right now.

"Some of the water has overtopped some of the levees but they haven't collapsed, and that couldn't be said about some levees on the Missouri River." 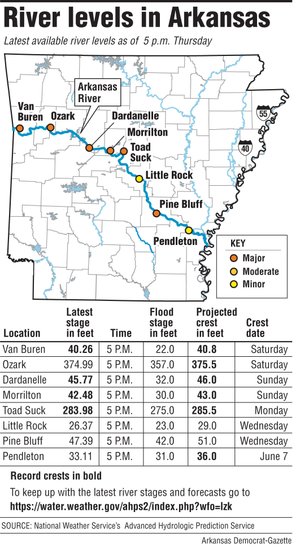