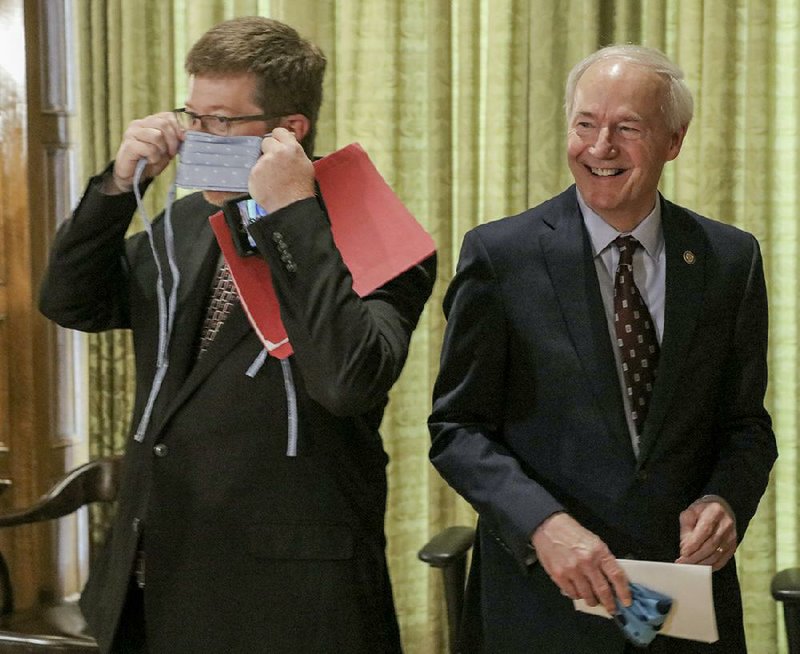 Gov. Asa Hutchinson on Monday touted what he described as signs that the state's efforts to slow the spread of the coronavirus are working and announced that Arkansas will send five ventilators to Louisiana, where more than 1,800 patients were hospitalized with the virus.

The number of positive cases in Arkansas increased by 74, to 927 as of Monday evening. 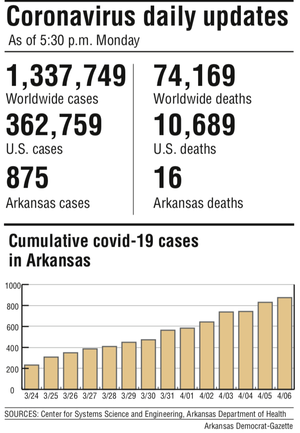 So far, 16 Arkansans have died from the virus. State officials did not report any new deaths Monday.

"This week I know [Louisiana Gov. John Bel] Edwards is going to be confronted with a real challenge," Hutchinson said. On Monday evening, Louisiana had about 15,000 cases of covid-19, the disease caused by the coronavirus, and more than 500 deaths.

Hutchinson said Arkansas is still trying to build up its own supply of ventilators but has enough at the moment.

"Our thinking is that there's an urgent need for ventilators in Louisiana this day, and so we want to save lives this day," Hutchinson said.

"We have a little bit more of a cushion, and we hope that we can continue to flatten that curve and reduce exposure so we don't need that many ventilators, but if we do, we have them on order to beef up our supply."

University of Arkansas for Medical Sciences spokesman Leslie Taylor said UAMS Medical Center bought them for $29,000 each from a company in China.

She said they'll be sent to New Orleans after their scheduled arrival in Arkansas on Thursday.

UAMS Medical Center has about 100 ventilators, she said.

"We had gotten these other five, and so we've determined that right now we're OK, and they really need them in Louisiana, so we're doing what the governor asked," Taylor said.

The number of covid-19 patients who were hospitalized in Arkansas increased Monday by seven, to 74, while the number who were on ventilators dropped by five, to 22.

The state has a total of about 800 ventilators, including about 500 that weren't in use on Monday, Department of Health Secretary Nate Smith said.

Edwards said Sunday on CNN that Louisiana was on track to run out of ventilators by the end of this week.

Hutchinson and other Arkansas officials walked into the governor's conference room Monday wearing cloth masks -- following guidance issued by the U.S. Centers for Disease Control and Prevention -- that they removed at the start of the news conference and put back on when it was over.

At the news conference, Hutchinson touted figures that he said illustrate the effect of the closures and other restrictions aimed at curbing transmission.

[Video not showing up above? Click here to watch » https://www.youtube.com/watch?v=nd-2zqqUcCQ]

The Republican governor displayed a chart showing that it took seven days for the state's cases to double, the last time that happened. By contrast, after the state's first case was discovered on March 11, the number of known cases often doubled in as little as one or two days.

"This is a national measuring stick that again indicates that what we're doing in Arkansas is having some beneficial impact," Hutchinson said.

He then displayed another chart, which he said he received from White House Coronavirus Task Force coordinator Deborah Birx, showing that Arkansas was near the bottom of states in confirmed cases per 100,000 residents and in the rate at which the cases are growing.

As of Monday afternoon, the state had 29 identified cases per 100,000 residents.

According to data from the Covid Tracking Project, which collects information from state health departments, that was 11th-lowest among states and the District of Columbia.

Measuring from the time the first case in Arkansas was discovered, "we actually have tracked pretty close to California," where a resident first tested positive on Jan. 25, in terms of the growth of cases, Smith said.

California on March 19 became the first to issue a statewide order telling residents to stay home -- a step Hutchinson so far has resisted, despite national attention regarding that stance.

But Smith indicated the results of Arkansas' measures have been similar. Those include limiting restaurants to takeout and delivery only; closing movie theaters, bowling alleys, casinos, hair salons and other businesses; and prohibiting indoor social gatherings of more than 10 people.

Hutchinson on Monday also announced that public schools will remain closed for the rest of the school year. Previously he had said they would be closed until at least April 17.

"If people adhere to a stay-at-home order, then it would be a highly effective way" to slow the spread of covid-19, Smith said. "If people adhere to the directives that we have in place, those also are highly effective ways of preventing the spread of covid-19, but what people actually do and what they can sustain over periods of time, that may be a different story.

"What we are seeing with our numbers suggest that what we're doing has been effective, and hopefully it's something that we can continue to sustain long enough to get us over the hump and get us past this epidemic."

President Donald Trump last week granted Hutchinson's request to declare a major disaster in Arkansas as a result of the coronavirus and also granted the state's request for federal reimbursement of its Arkansas National Guard expenses, said Lt. Col. Brian L. Mason, a spokesman for the National Guard.

He said 96 airmen and soldiers have been placed on active duty, including medical personnel helping to staff Health Department call centers and a UAMS Medical Center drive-thru testing clinic, a team helping with planning and logistics for the distribution of medical supplies, engineers who are helping to identify sites for temporary medical facilities, and a crew working at a warehouse where protective medical supplies are being delivered.

He quoted Maj. Gen. Kendall Penn, the adjutant general of the guard, as saying, "We're proud to support the call."

"Anything we can do, I know Gen. Penn said, 'Hey, we're proud to do it,' and I concur wholeheartedly, and that's what our soldiers and airmen are out there doing," Mason said. "I've been out there with them, and they're doing great and wonderful things."

The virus emerged late last year in Wuhan, China, and spreads through respiratory droplets emitted when people sneeze, cough or talk. Symptoms -- fever, cough and shortness of breath -- have been mild for many people. Studies have indicated that the virus can live for days on surfaces.

The state's newest cases included the first ones reported in Clay, Franklin, Logan and Izard counties, raising the number of the state's 75 counties with reported cases to 68.

Hobbs also identified another of those who recently died of the virus as Joel DeBose, 76, of Higden.

DeBose died at a hospital at 8:50 p.m. Saturday, Hobbs said.

Other nursing homes where at least one resident or worker has tested positive include the Villages of General Baptist West in Pine Bluff, Apple Creek Nursing and Rehab in Centerton, the Waters of White Hall and Greene Acres Nursing Home in Paragould.

The total includes 15 physicians, 36 nurses and 15 nursing assistants, among other workers, Smith said.

By the evening, 139 Arkansans were listed as having recovered, meaning that at least a week had passed since they fell ill and that they hadn't had symptoms for at least three days.