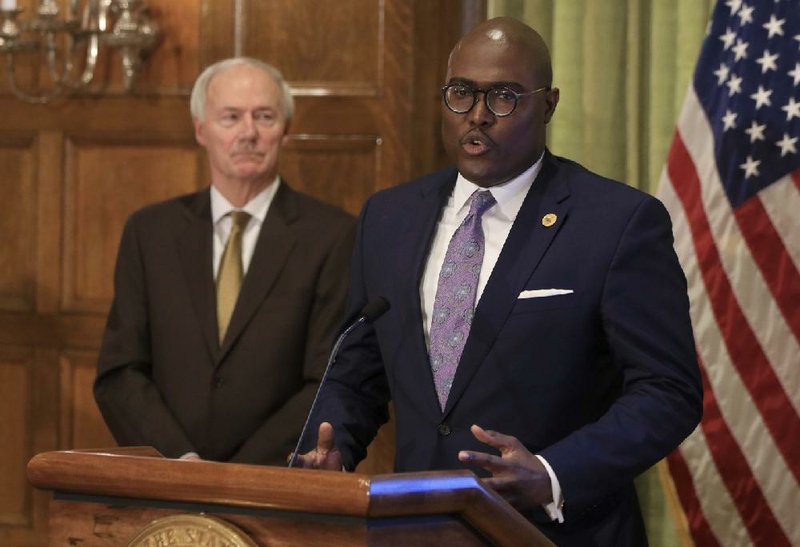 Little Rock Mayor Frank Scott Jr., speaking at Tuesday’s briefing with Gov. Asa Hutchinson, said his request for a stay-at-home or- der for his city had been refused, but he said he was “working within the confines of the current laws and great partnership with the governor.” More photos at arkansasonline.com/48governor/. (Arkansas Democrat-Gazette/Staton Breidenthal) ( Arkansas Democrat-Gazette / Staton Breidenthal)

Gov. Asa Hutchinson said Tuesday that the state will help cities enforce restrictions on social interaction designed to slow the spread of the coronavirus, but he won't allow them to impose stay-at-home orders.

He spoke at a news conference with Little Rock Mayor Frank Scott Jr., who said he had asked the governor to impose such an order on the capital city.

"I've had discussions with a number of different mayors, and I think it points to the need to have a statewide policy," Hutchinson said when asked if other mayors had made similar requests.

"If you have a business in one community, it impacts others."

He spoke just after officials announced the deaths of two more Arkansans from the coronavirus, raising its death toll in the state to 18.

In the health emergency declaration that Hutchinson issued on March 11, the day the state's first case was discovered, the Republican governor barred cities and counties from issuing "quarantine regulations of commerce or travel" except "by authority of the Secretary of Health."

Another executive order Hutchinson issued Saturday clarifies that cities and counties can take "reasonable measures" to limit the virus's spread by closing parks and facilities and imposing curfews, as long as they don't prevent people from getting to work, acquiring food and other necessities, walking pets or exercising while staying at least 6 feet away from other people.

"We have given them additional discretion in terms of curfews, but we want that coordinated with my office so that we're all on the same path," Hutchinson said Tuesday.

Scott said he speaks to Hutchinson at least once a day if not twice.

"From the city of Little Rock's perspective yes, I believe that is what's best for Little Rock," Scott said of a stay-at-home order. "But that may not be what is best for Fort Smith.

"And so as mayor of the city, that's something that we desire; however, we are working within the confines of the current laws and great partnership with the governor."

Pulaski County, which includes Little Rock, has the highest number of covid-19 cases in the state. The county's total rose by eight, to 179, from Monday to Tuesday evening.

In addition to restrictions imposed by the state, such as a prohibition on indoor social gatherings of more than 10 people, Little Rock and Pine Bluff have imposed curfews from 9 p.m. to 5 a.m.

Scott said Monday that he also would issue an executive order prohibiting vehicle caravans after seeing "enormous crowds" on Asher Avenue and Colonel Glenn Road and in parking lots over the weekend.

North Little Rock Mayor Joe Smith, who has said he will defer to Hutchinson on what restrictions are needed, has not asked for a stay-at-home order, city spokesman Jim Billings said.

He said that help is also available to any law enforcement agency in the state.

While most Arkansans have been doing their part, "in certain circumstances we've had some citizens who blatantly disregarded these directives," Bryant said.

In addition to limiting the size of indoor gatherings, Hutchinson has closed public schools for the rest of this school year; limited restaurants to takeout and delivery only; and closed movie theaters, bowling alleys, casinos, hair salons and other businesses.

He has yet to issue a broader order, like those in place in 42 other states, directing residents to stay home as much as possible and closing all businesses except those deemed essential.

But on Tuesday he presented more evidence that he said shows his approach is working.

He displayed maps and charts showing that Arkansas had fewer cases per 100,000 residents than all surrounding states except Texas.

Arkansas also ranks fifth among the seven states in the number of tests per 100,000 residents that had been performed, which he described as being "about in the middle."

Each of those states has issued a statewide stay-at-home order except Oklahoma, which has a "safer-at-home" order for residents who are 65 or older who also have compromised immune systems.

Several Oklahoma cities, including Tulsa and Oklahoma City, have their own, stricter stay-at-home orders.

"I share this because it should be an encouragement to the people of Arkansas that our targeted approach is working," he said.

The Health Department on Monday received portable 15 machines from Abbott Laboratories that, according to the company, can return positive test results in five minutes and negative results in 13 minutes.

Hutchinson said Tuesday that Arkansas Heart Hospital and its chief executive, Bruce Murphy, have donated an additional machine and kits allowing the state to conduct an additional 500 tests of health care providers.

The Health Department is working to acquire more of the test kits, McNeill said.

[Video not showing up above? Click here to watch » https://www.youtube.com/watch?v=PPg4Fsp2fqE]

In Arkansas and elsewhere, testing for the coronavirus has been limited by the availability of materials and equipment during high global demand.

But Smith said that over the past day, the state had received 1,436 results, its highest single-day total yet.

The bulk of the total -- 1,285 results -- were from commercial labs outside the state. The University of Arkansas for Medical Sciences completed 78, and the Health Department completed 73.

Those testing positive recently included 12 health care workers, raising the number of such workers who have tested positive to 134.

Residents of two nursing homes, the Waters of White Hall, where eight other residents have tested positive, and Salem Place Nursing and Rehabilitation in Conway, were also among those who tested positive recently, Smith said.

A worker at Three Rivers Healthcare and Rehabilitation was also among those recently testing positive, Smith said.

Of all the health care workers who have tested positive, 16 are physicians, 41 are nurses and 19 are nurse assistants.

The number of people who were hospitalized remained unchanged at 74, and the number on ventilators increased by four to 26.

By the evening, 189 Arkansans were listed as having recovered, meaning that at least a week had passed since they fell ill and that they hadn't had a fever for at least three days.

Confirmed cases had been reported in 68 counties, with no new counties being added to the list. 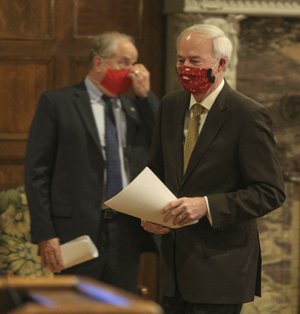